Ignore the calendar. Spring is here. My potatoes and garlic told me so. So did the skunk cabbage. I don’t know who or what to thank or blame, but in my pantry and outside potatoes and garlic are sending out shoots. On a run the other day I saw my first skunk cabbage of the year. Plans are necessary, but when opportunity shows up action is required. Otherwise, good things go to waste.

Do not come to me for great gardening advice. Anything I plant or am given to water gets an apology from me first. Others produce amazing produce with very little time and effort. I tried. The slugs, bunnies, and deer enjoyed my projects. And yet, some things grow despite my efforts. I won’t get in their way, and even give them a bit of encouragement – followed by yet another apology.

The frugal side of me wants to produce produce. Food grown at home has a lot of advantages: as organic as I can make it, readily available, supposedly sustainable, good emergency preparedness, and an excuse and reason to get away from the computer. After a few decades of trying, all I’ve managed to somewhat reliably produce are potatoes and surprises. I can’t even get zucchini to grow faster than the critters can eat it; but, somehow I’ve grown figs, apples, a few berries, tomatoes, peppers, ginger, and lots of herbs. Considering the price per pound for some of those, that’s a good deal. 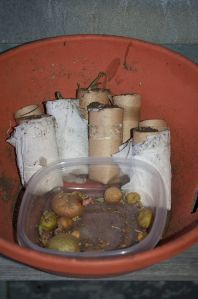 It is February 16th, more than a month from the first day of Spring. I’ve been busy with my clients, my classes, and my talks. Carving out a bit more time to take on another project, an outdoor project, seemed silly. Then, I opened the pantry. The garlic was growing. The potato bin had a few spikes popping up. They wanted to grow, and weren’t waiting for me; but were seeking sunshine, water, and soil. In a bit of a frantic dash, I pulled them together, collected some paper tubes I’d saved as starter pots, and planted them before the sun went down. I have no idea if any of them will grow, but they’ll have a better chance outside with Nature tending them.

The idea didn’t seem so silly after I realized that the places I wanted to plant them already had volunteers breaking through.

Seattle has been warm and wet after being warm and cold. According to a tweet from the National Weather Service, “All-time wettest Dec-Feb for Seattle was 1998/99 with 22.77 inches. This winter so far 22.19 in.” Maybe El Nino made it happen. Something was different, and my plans of pruning during a cold snap, enriching the compost with egg shells, building up weed barriers, and establishing protective netting were superseded by Nature and reality.

. As a friend and fellow consultant put it, I catalyze their passions into actions. Step one: learn about the explicit goal. Step two: uncover the implicit goal. Step three: build a plan that gets from here to there, wherever there is. Step four: begin executing the plan. Step five: watch reality change everything. Step six: change, shift, adapt, and continue with a new plan. It is a process that can seem silly; but unless you find a reason and a method for taking that first step you’ll have a tough time making any progress. Without developing a plan and failing, it is difficult to succeed. That’s true in projects, investing, almost any human endeavour.

Ask most artists. They have a vision and an intent, but the characters in a story rewrite the story, the lighting or the subject’s attitude shifts a photograph, imperfections in raw materials redirect a sculpture, an audience redirects a performance.

, I intended to write a simple travelogue. After the World Trade Center tragedy, my book became a comparison of pre- and post-9/11 America. Now, I realize that a rewrite could focus on issues of personal body image or American self-esteem.

The world is in accelerating change. Election cycles, political responsibilities, climate change, inequalities, technological advancements, and financial upsets are all active and increasingly intertwined. Several governments are frantically trying to adapt to plunging oil prices, and therefore plunging revenues, which are causing backlashes against austerity, while renewable energy redefines industries and jobs, as coastal communities are having to evacuate their towns. The issues can’t stand still because their neighbors will jostle them as well.

I’ve considered holding a salon of sorts in my house; just a gathering of friends who are aware of more than three issues at a time. This year is already overwhelming and we’re barely a tenth of the way through it. From the time I planned it until now, a US Supreme Court Justice had died and a replacement must be selected, Japan’s central bank has joined European central banks in charging negative interest rates, we’ve detected gravity waves, a country’s electrical grid was hacked, and an armed insurrection arise and fell within the United States. (Those and more are collected on PretendingNotToPanic.com

And yet, it is good to have a plan. Otherwise, it is too easy to stand still forever, letting uncertainty create inaction, and never making progress.

In less than an hour at dusk, I planted about a dozen potatoes, found a few more, set some garlic in the ground, and was surprised that mushrooms planted a year or so ago may be fruiting. I didn’t expect that, but if that’s what’s happening I have plans for steak and mushrooms, omelets, salads, soups, pizzas – unless something changes my plans. 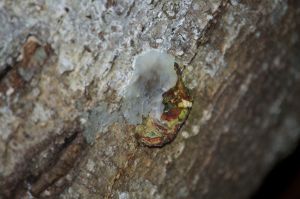