Last night’s class ended with my common refrain; “The most powerful tool we have is each other.” The class was part of a series I am teaching about Social Media for Writers. Rather than stand up there and pretend that I am some exalted expert, I try to show folks that the best way to learn about social media is to be social. We can do much more together, including learning – but also, creating. This morning, a friend passed along a link for an organization built around that idea of crowd collaboration. I’ve decided to listen to my own advice and dive in. Welcome to Day 1 of my involvement with HitRecord.

“We’re a new kind of online community working together as a production company” – HitRecord.org

The intro video that my friend shared on Facebook talked about something I’ve frequently experienced. Creative people can have great ideas that almost, but not quite succeed. So many ideas require more skills than one person can embody. Even Michelangelo and Leonardo had help. (I’m talking about the people from the Renaissance, not the Ninja Turtles – but they had each other, too. Those graphics are probably locked down by copyright, though.) The idea for the site is to collect ideas, talent, skills, energy, resources, and enthusiasm to create and complete projects that might not be possible within one person’s community. Reach out and mix, and watch what happens. No guarantees.

The frugal part of me appreciates the possibilities. An author can have a marvelous story and beautiful writing, but have no idea about how to design a book cover. A videographer may capture phenomenal footage, but is stymied by the sound track. How many ideas have you had that were one person shy of something wonderful? (Helping such people catalyze their creations is one of my joys as a consultant.)

About a month ago, several of us tried to find a way to illustrate the amazing wealth disparity revealed by Oxfam 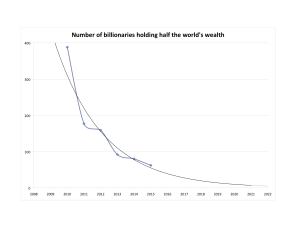 . Half of the world’s wealth resides with only 62 people. To some people, that’s an abstract statement best addressed by ideology. To me, it is a quantifiable warning sign of an unstable economic system. We tried for days and came across a revelation; “The very fact that this is beyond some of our technological limits is a message –“ Displaying the wealth inequality would require wealth. We came up with a idea for one print that would represent the imbalance between one of the ultra-rich and the millions of people that would be required to match that one person’s wealth. Printing the image would cost millions of dollars. Only the rich can demonstrate how rich they are.

1) 17:20 Go to HitRecord.org
2) 17:20 Join
3) 17:21 Fill in username and password and read the shortest terms and conditions I’ve ever seen and prove I’m not a robot.
4) 17:23 Waiting for the confirmation email.
5) 17:23 Realizing I’ve set up yet another online account.
6) 17:24 I’m in! And they don’t like my browser, but I can go ahead anyway while experiencing a “degraded” experience. I’m betting that they’ll upgrade eventually. If not, I’ll do the rest on my Chromebook.
7) 17:25 Time to explore.
8) 17:27 Out of 16 interests, I’ve picked 6 to emphasize: Writing, Photography, Voice Acting (which I hope is like voice-overs), plus the 3 that they selected somehow: Video Q&As, Interviews, and Curation. I suspect I can change these later.
9) 17:29 Get Started! which is slightly delayed because I am documenting the process.
10) 17:30 The first thing they direct me to is the page of featured challenges, opportunities to collaborate.
11) 17:31 Some interesting possibilities that I can already contribute to; but first, follow them on Twitter: @hitRECord.
12) 17:33 Cool. Great. Nice stuff, but I want to create. How do I do that?
13) 17:34 Can’t figure out all the icons; so, when in doubt, fill out my profile.
14) 17:39 Enough frivolity. Back to work.
15) 17:39 Hit the big red circle and see what happens. Ta da! That’s where I can issue a challenge; i.e. suggest a project.
16) 17:40 Evidently, the button for creating a project makes me a producer. A new resume line?
17) 17:42
Displays of Extreme Wealth Inequality
Accurately displaying the world’s extreme weath inequality requires extremes only the rich can afford. Let’s show the world the reality. (Has to be under 140 characters, Twitter’s influence pervades.)
18) 17:46 Benefit from my previous blog post and copy&paste to create a description;
Wealth inequality is so staggering that the nearest analogy are astronomical numbers, and astronomical numbers are so hard to grasp that most folks don’t worry about them.  Oxfam released their annual wealth inequality report. As of the end of 2015, 62 people own as much wealth as half the population of the planet. The trend has (oops, typo) is a worry for people’s lives and the global economy. There are several representations of the previous years’ situations, but they are already out of date, and the extreme nature of the situation has become literally unimaginable. Our brains don’t deal well with vastly different numbers and tend to slip from reality into abstraction. Unfortunately, there are real world implications and they are manifesting faster than many of the other global issues.
The longer version of the discussion is over on my blog: https://trimbathcreative.wordpress.com/2016/01/26/extreme-displays-of-wealth-inequality/
19) 17:51 Issue a challenge.
20) 17:53 Or not. Evidently, I have to “Add at least 1 Challenge to take Live”; which sounds like an appropriate reciprocal effort – and may also create a significant delay.
21) 17:55 Or not. How do I add a challenge?
22) 17:56 Hello, Help.
23) 17:58 Help makes it sound like I did everything I was supposed to do. Evidently, not. Random poking around will commence.
24) 18:00 Okay, let’s try issuing a Challenge from scratch via a new window I found. Glad I copied and pasted.
25) 18:03 Add tags: infographic, infographics, meme, printable, print, graphic art
26) 18:05 No deadline, though within the next few months would be good because a year from now the numbers will have changed again.
27) 18:06 Not sure what else to add; so, Issue Challenge! & Challenge Created!
28) 18:07 I have no idea what to expect from here; so, I’ll leave the window up, take a short break, and then get back to finishing the blog post if nothing has happened.

It’s Friday evening, almost dinnertime. In less than an hour, I was able to take a stalled concept and move it onto a new playing board. Maybe it goes nowhere. Maybe this is the way to find a solution. I’ll post updates if there’s any progress. There’s an appropriateness to using crowdsourcing to illustrate wealth inequality. Can a crowd create a pervasive illustration that would cost millions otherwise? Do they even care? Am I using an awesome tool for the wrong purpose? It wouldn’t be the first time a screwdriver was used as a hammer.

Amongst the worrying nature of the world, I am encouraged by the reality that one of the growing trends is based on collaboration, cooperation, sharing, and equality. If this project was to somehow also make money, the participants have a chance of getting paid. So far, the site has paid out about $1.6M to individuals. That’s not the goal of my project or challenge; but as time allows, I hope to help others for the fun of it and possibly for some financial benefit. If a site like this produces the next hit indie movie, bestselling book, viral video, or something unimaginable yet profitable, then it was probably worth the effort.

Power and money are seen as synonymous. We may be in an era when that notion has been amplified and is being challenged. Can crowds successfully compete against conventional organizations? Some say yes. Some simply scoff. I suspect there will be a mix of the two because the old ways are looking unstable, but the new ways haven’t proved themselves to be sustainable. It may take years to prove if the instabilities were temporary or catastrophic. It will take years, and maybe generations, to prove if a new system is sustainable. The good news is that we can try now, find out for ourselves, and maybe challenge old ideas with new.