Giving Thanks For The Basics

Last week was Thanksgiving, at least in the US. It was our annual day to eat and drink and socialize, with some ritual thanking going on. Rituals remind us to do the things we know we should do every day. Today I’ve been giving thanks more than usual because of events in friends’ lives and in the community.

Happy Thanksgiving. Prepare to eat! Without much effort I could’ve committed to feasts from mid-Wednesday through to Friday. I’m big enough already. Two celebrations would be more than enough. Wednesday evening there was a private community event. That may sound like a contradiction, but at some level every community has some element of privacy. Friends rented a small, local, progressive hall for a potluck and a few dozen friends. Hours were spent preparing the room and the food. Sadly, I did very little because of work. Eating would take an hour or so. Socializing took longer. It was all good. The hosts inserted a ceremony between the preparing and the serving. Everyone was asked to stand in a circle and, if they felt like it and without pressure, say what they gave thanks for. Amongst the heartfelt emotional responses I included thanks that the power was on.

Within 24 hours the power was off, first for a few, then for many.

Fortunately, and because we locals know that the power tends to go off in the Salish Sea’s worst month for weather also known as November, the Thanksgiving Day meal was cooked on time and nicely done while the power was on.

The rains hit. The wind hit. Then the rains stopped. The wind continued. Then the snow came through. The snow quit falling, but the temperature sunk. The power crews were busy with branches, ice, and wires. (Thank you PSE.) Most of us resorted to intentionally courting cabin fever rather than having our vehicles dance the tango with the power poles. 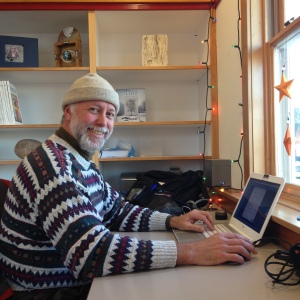 Mondays happen, and I had to drive to the co-works for some chores. The roads were icy enough on the way home that my truck swayed to the right, then swung to the left, then back, and then again, and then I cheered. I’d steered through ice that wouldn’t respond to 4WD. No one was coming the other way. I hadn’t interrupted anyone’s power, and therefore heat, in freezing weather.

With the start of December I launched my new blog, Pretending not to Panic.

Launches can go unnoticed, but not this one. I’ve been pleased with the response. Within the first few days traffic was nice and growing; though, more valuable were the several people who passed along their worries, situations, and coping mechanisms. The people most thankful for having a home were the ones that almost lost theirs. The ones most thankful for having healthcare were the ones who were in poor health. The ones most thankful for a paycheck were the ones who knew that money was a necessity in the short term regardless of how we may philosophize about it for the long term. As one entrepreneur put it, “The people who can offer the most, frequently understand the urgency the least.” (paraphrased)

This morning was the first when I didn’t worry about slipping on the way to the mailbox (empty) or the pipes freezing. Birds visiting the emptied planter outside my office window are no longer fluffed and puffed. People are wearing shorts as they walk errands. A bit of sunshine and 40 degrees (F) is easier to be thankful for after days with freezing temperatures, wind chills below 10 (F), intermittent power, and the eventual end of the turkey and stuffing. (It was so sad to see that last saved bit of pumpkin pie sprout a few white dots.)

We are thankful most when we have experienced loss. Appreciating what we have before we lose it is not a natural human talent; but as we learn to appreciate the basics of life: air, water, food, health, safety, and each other, we can be overwhelmed with things to be thankful for every day. I’m thankful that I haven’t lost hope in the possibility that we can appreciate the basics of life.