What A Difference A Half Teaspoon Makes

Bogie and Bacall, but let’s treat them with more respect, Humphrey Bogart and Lauren Bacall, Lauren Bacall and Humphrey Bogart. Real people that were classic iconic Hollywood stars, people who people watched to mimic their actions, attitudes, and appearance. One small aspect of their screen characters was the way they handled alcohol and tobacco. Vices became stylish props that encouraged millions to drink and smoke. In the black and white era of movies, Prohibition was only recently repealed, and cigarettes were about to be labeled as something to prohibit. Marijuana’s icons are Cheech and Chong, Jay and Silent Bob, the Dude; role models that reflect stoner culture from when marijuana was prohibited. I watch trends. One trend I’m watching is how marijuana use will be defined and matured in the media. In the meantime, I’ll have a cup of tea.

My culinary cannabis experiment continues. This is not a quick process. Anyone who has compiled a cookbook, even just one for personal use, knows that testing recipes and variations is more than just a single trial and error. Getting the ingredients, process, cookware, and presentation correct means each recipe takes several tries and days, weeks, or months of work. Progress is slow.

With marijuana’s prohibition lifted, why, how, and when we use marijuana begins to mature from barely covert adolescence to something more refined and eventually to a part of normal society. Go into a pot shop and the paraphernalia continues to represent stoner culture: bongs, garish colors, and am emphasis on celebrating the plant. If the same was true of liquor stores we’d probably see a still, bottles of moonshine, and pictures of potatoes, grapes, and anything else that eventually becomes liquor. Just like wine aficionados eagerly seek specific vintages of cabernets instead of grape alcohol, eventually cannabis connoisseurs may seek particular harvests of blackberry kush.

My experiments are slow and methodical because I revert to my engineer training. First was an eighth of teaspoon, then a quarter, now a half of a teaspoon – and the last of the first gram. And yet, that won’t be the last because the frugal part of me just drinks the water and saves the rest of the bud for experimenting with popcorn. I’ll be at this for a long while, I hope. 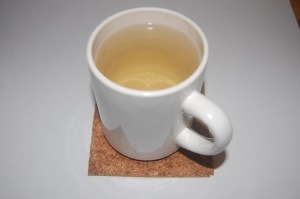 The marijuana industry has an amazing multi-billion dollar infrastructure, most of which is illegal. The states where marijuana has been legalized for recreational use didn’t make the switch automatically. Legal hoops were set in place and entrepreneurs had to jump through them. At least at my local shop, prices are above black market (so I’m told) but will probably come down quickly. The first shops opened when there was barely any legal, registered, and inspected product. Now that more growers have licenses the supply will go up and the prices will go down. Demand, while it may spike from novelty initially, is probably already set for the majority of the population. My kitchen tests will get cheaper.

Marijuana is an interesting trend. Most of the time when I track a trend, it is from a distance. I tracked Starbucks, but didn’t drink coffee. I tracked Pixar, but don’t have kids. I track biotech, and hope I never have to use it. (Details in my book, Dream. Invest. Live.

) Marijuana, however, is something that has enormous potential because of its recreational and medical applications, its wide appeal, and the transition it will undergo culturally and commercially.

Currently, the operations are large enough to overwhelm the individual entrepreneurs but small enough to be dismissed by national corporations. As more states legalize marijuana, and as the finances turn from cash to conventional processes, the small operators will probably find themselves unable to compete with the larger operations, or guarding a niche, or being bought out. I hope at least a few become successful enough quickly enough to be pure investment plays. There are stocks, but they are as speculative as early computer and internet companies. Great risk, great reward, and allow me to repeat the part about the great risk. Though I am intrigued about the stockholders meetings. Starbucks gave away coffee. Pixar gave away posters. Just a hint, you know. 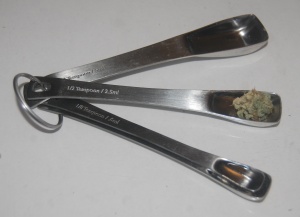 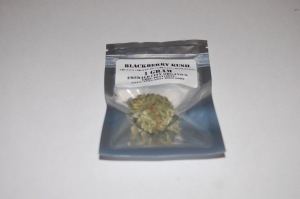 measures up for flavor, wine pairings, and medical effects – both good and bad. It is nice to see a site that has taken that step beyond stoner culture and presents useful information without a lot of wink, wink, nudge, nudge.

The culinary results so far are not dramatic. Sorry folks, but I don’t want a beer to have dramatic effects, either. I’m not hunting for drama. I’m hunting for a no-calorie way to relieve stress and help me sleep.

Correlation is not causation, but I have been sleeping better. The teas aren’t supposed to be very strong unless some other solvent like fat or alcohol are included because the active compounds don’t react with simply getting wet. The buttered popcorn that follows, however, has had a welcome effect. I smile. My head and neck muscles relax. It is amazing to see how tight they are. The first time they started to relax I thought I was having a headache. I wasn’t. It was just the ache you feel in a muscle that’s been working under strain for too long. Skip the drama. I didn’t get stupidly euphoric. I didn’t sink into cowering anxiety. The only anxiety I had was from listening to other people’s stories.

In the foodie world there’s a term called plating. It has nothing to do with electrostatic depositions. How are the elements of the meal presented to be best appreciated and enjoyed? That’s another part of the experiment. It is happening on a personal level. Buttered popcorn is not always optimal. It is happening on a societal level. What is a socially acceptable way to relax: smoking, drinking, or maybe something our adaptable species has yet to create.

In the meantime, my cup of tea brewed from about half a teaspoon is about half gone. It is easier to move my neck. My face is relaxing. I certainly don’t have the charisma of Humphrey Bogart, so someone else will have to popularize the maturation of this new industry, and I’ll be watching – and maybe a bit more mellow than before.