It’s the holiday season, the time for celebration, rituals, and traditions. On my list every year is a string of movies that wait for long nights and twinkly lights. The classic that was written in six weeks to pay some bills, wasn’t initially a financial success, then was  discovered, popularized, and now elevated to iconic is Dickens’ Christmas Carol. Scrooge and humbug resonate through the collective memories. As I’ve been working seven days a week, a comment was made about Scrooge’s lesson. Such a great emphasis is placed on Scrooge, the wealthy and greedy boss, that many seem to forget the other character working seven days a week, but for different reasons. Bob Cratchit worked because he had to. He worked to keep his job, his source of income, and take care of his household. Two stories in parallel, repeated several times every year, and yet the one is far more memorable than the other.

I usually only watch on incarnation of A Christmas Carol, but this year I’ll watch two. The Muppet Christmas Carol, because I finally have it on DVD. And, Scrooged, because Netflix added it to their streaming list this year. I’m already smiling.
“Light the lamp, not the rat!” – Rizzo (not an original Dickens character)
“Watch the birdie!” – The Ghost of Christmas Present (but Dickens’ character never whacked Scrooge with a toaster

The terms weren’t used then but, the tension in the story comes from wealth and its inequitable distribution. Wealth wasn’t bad. There are positive wealthy characters and negative wealthy characters. Charity and philanthropy are central to two men asking for donations. Scrooge and Marley sit on the opposite side, though Marley does it from the very far other side because he is dead, and Scrooge only represents greed for his most recent decades before his revelation.

A sign of a good story is being drawn to know more about the other characters’ back stories. If the three ghosts visited Bob Cractchit, what would he see in his past, present, and future? For every Scrooge there were dozens or hundreds of Cratchits. Dickens wrote about dark times for England. Eventually, the country reformed and took better care of more people. The country had its own Scrooge moment.

Scrooge is greed and selfishness. Cratchit is frugal and compassion. Remember the philanthropists. They prove that wealth does not equal greed, but can lead to it. Remember many of the characters in Dickens’ other novels. Poverty can create selfishness, but doesn’t have to.

Hard work, however, is common. The reason and goal of the hard work distinguishes the difference. Is the work barely enough to pay the bills? Is the work targeted at a well-defined, quantitative goal? Is the work itself the goal? In which case it could be a noble endeavour. Or, is the work solely for the accumulation of excess beyond all needs, wants, and uses?

It is harder to enjoy the holidays when every day is a work day. I’m already behind on my baking. The only decorations out so far are one mug and some kitchen towels. I’ve got great plans, but the bills must be paid.

Many of the traditions were paint in Victorian white are luxuries. To many they are unreasonable goals, and yet credit cards fill as people try to match the ideal.

I’m keeping in mind the Cratchit household. My life has never been as hard as theirs. My situation requires significant improvement, but to me that merely emphasizes how many millions in the US, and how many billions in the world, are struggling with far less while witnessing grandiose displays. And yet, almost everyone will find some way to celebrate. Eventually I’ll get the lights up. I hope to start making wreaths from my property’s herbs. The cards may be emails this year. (Of course, now that I think of it, maybe you and I should buy some of my cards. 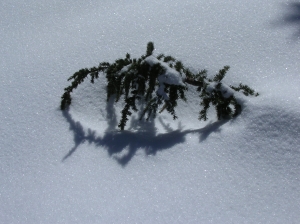 ) I’ve already sung a few carols on a walk through town.

(Okay, now I’m thinking I should go out and dig into the storage boxes if lights after I post this. Ho. Ho.)

There’s plenty of time left in the season. As a Christmas Carol inevitably gets in front of you, take a look at the story that isn’t Scrooge. Take a look at the rest of the people. Regardless of their condition and situation, each would probably find at least some small way to celebrate; especially, as Scrooge eventually provided, the day off with pay.