Finally, good news on tax day. Every year, filing income taxes provides yet one more data point in my roller coaster ride through America’s wealth classes. This year, despite making just about the same as the last few years, I paid less in income tax. Skip the politics and other guesses and applaud my tax accountant, Tamera Lewis. Hiring a professional certainly helps, sometimes is a luxury, and sometimes is a necessity. Now to come up with the money to pay taxes for 2018 and start collecting them for 2019. An interesting process.

Add that new data point (really a datum, but I grammatically digress). In 2018 I made within a couple of thousand dollars of what I made in 2019. Not great progress, but the near-term potential has risen dramatically. Yet I paid about 20% less. In an academic environment it would be possible to quantify the various factors involved, but I’ll give credit to Tamera. It wouldn’t be a surprise to learn that a professional can figure out taxes better than cheaper software. I was glad for TurboTax, but I am gladder for saving over $1,500.

Despite the lower taxes, they weren’t so low that I could simply write a check for them. Income from real estate is sporadic, and two or three transactions were delayed a month or two or three or – well, we’ll see when they happen. It was back to using the credit card for a payment that can hopefully be cleared before summer.

As I’ve said before, when I was richer it was easier. It was also simpler. When I lived from investing in stocks, it was possible to fill out the forms by hand. I only traded a few times each year, only had a business license in case someone wanted to buy a book or a photo, or hire me as a consultant. It was low-key and easy. Hold stocks long enough and the tax rate goes down, too. Sell off a few losers to balance the winners and get a tax rate near zero.

Then My Triple Whammy hit. Scramble to build a business during the Great Recession while watching losses accrue in my IRA that can’t be balanced against anything. Start the seven day work week energizing those smaller revenue streams like books and photos. Jump into the Gig Economy and reach last year’s maximum of seven 1099s. 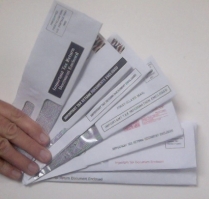 Even using TurboTax, calculating my taxes was difficult and painful. TurboTax’s constant updates of what I might owe kicked off anxiety attacks during the process. Bad timing. And yet, trying to do the same job by understanding every nuance, cost, and benefit for about a dozen different income streams and businesses would be unhealthy. I trusted the software because I knew I couldn’t devote enough time to become an amateur accountant.

And then I became a real estate broker. Last year was a transition year as real estate stepped in as large projects like managing an online museum stepped away. That also meant yet another type of business and yet another possible set of forms. Help! Hence, hiring an accountant.

This is so much easier, almost as easy as when I was retired, a millionaire, and had an accountant because “Why not?”. Data and papers still have to be collected, but instead of agonizing over every entry, I was able to hand Tamera a folder, answer a few questions, and walk away for a couple of months. Even without knowing if I was going to pay more or less, using a professional was healthier. Stress is unhealthy, and I have more than my share, hence a fellow realtor awarded me for “clearing significant hurdles” in 2018. (The award is in my office.) Sure, I knew a professional would cost more than a software package that teased with ‘free’ yet charged over a hundred dollar fee; but establishing a new career with its required training left little time for learning another aspect of tax law.

By the way, further applause for Tamera. I finally got the call that my taxes were ready, except for a few questions. I answered all of them except one, which didn’t make sense when I read it in the email. A day or so later I called, because the spoken word is better than the written word. The confusion continued, so I dropped by because personally communicating with a person in person is better than simply hearing. She hadn’t made a mistake. I did. I accidentally gave her my data from 2017, not 2018. It was April and she’d have to start over again. Embarrassed, apologetic, and humiliated. And then impressed, again. One email and one day later and she’d updated everything. Whew. I even checked if there’d be an extra charge for such a late mistake. Nope. Whew, again.

Tamera was even nice enough to alleviate my anxiety by telling me the number before I dropped by to sign the form. The total bill almost matched my checking account balance, but that was better than I feared because if it had been the same as before, it would’ve needed my business account, too. I could pay in cash, but there’d be nothing left for – anything. The mortgage must be paid. Insurance must be paid. I must eat.

I don’t like using my credit card. There are plenty of reasons for that dislike, which will probably become yet another post, but that comes later. One big reason was that I’d finally paid it off, just a few months ago. Hopefully, I can pay it off within a few months, and get ahead to the point that it stays that way.

Thanks to being able to be paid for helping people buy and sell houses and land, I can look forward to an even easier time next year. If all goes well, I may get to pay along the way, rather than scramble at the deadline.

And then I look around and see how many other people are scrambling every day in the Gig Economy, collecting every job they can, each with yet another contract, pay schedule, reporting requirements, and eventual transition to the next gig. Our tax code is designed for paychecks from life-long careers, or income from investments, or fixed incomes from trusts or retirements. Everything else is stapled, glued, and taped on to cover the rest. The result is a mess. But the result is that those working amidst the rest get no rest because they have to keep working and pay bills, yet find time to also understand the tax laws, even the ones that supposedly benefit them.

My roller coaster ride through America’s wealth classes continues. There are no guarantees, but it seems that I am heading back into familiar territory, a place where I can hire the right guides to see me through. Roller coasters have rails for guides, but this is America which means travelers are responsible for finding their way, maybe with some help. I’m glad I found some. I hope others do too.