It’s that time of year again. Ha! That makes it sound like doing chores is something that’s planned. In the Gig Economy, chores get done when the chores can get done. The weather is warm and clear. My work schedule opened after an intense and fruitful week. Working from home felt like playing hooky even though I worked on at least four different projects. Saving time by not commuting, not worrying about what to wear, or not having to pack a lunch meant I had more time to mow the yard, whack the weeds, and get the garden going. There are some advantages to working in the Gig Economy.

Last year’s harvest teaches lessons about what to plant this year.

The surprise hit was lettuce. 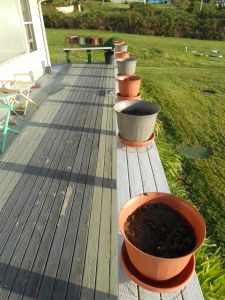 I’ve skipped it in the past because it looked too fragile, too easy for slugs and bunnies to feast first. A few years ago, I realized that containers on my deck are more productive (or more easily defended) than seeds in the backyard’s dirt. The backyard looks like the typical solution: raised beds, fruit trees, and a row of raspberries. The raised beds, however, didn’t raise the plants out of reach of the critters. Now that I’ve found ways to make it harder for pests, fragile plants like lettuce proliferate. I became a much bigger fan of salads when the lettuce was effectively free, fresh, and convenient. Having a diabetes scare helped, too. So, lettuce is already planted. About the only change there is that I am not doing the seeds-in-the-soil-bag arrangement. It works, but my schedule meant working with what I already had: last year’s dirt, my neighbor’s re-used pots, and seeds from several seasons ago.

The biggest fail? That’s a longer list.
The raspberries died. My fault. Not enough weeding or watering.
Gourds. I keep trying to grow them for birdhouses, art objects, or just for fun. Alas. They don’t mature around me.
Spinach should be successful, and it grew, but it wilts to nothing and I can grow a lot more lettuce in the same space. 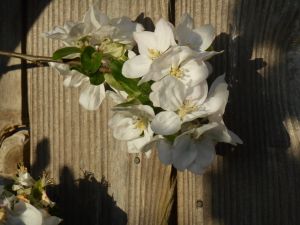 Slugs and bunnies don’t stop apples and figs. The trees are growing too well. I had to severely trim them this winter to keep within the neighborhood’s covenants. The apple trees seem unaffected. Their blossoms are the heaviest and densest I can remember. My main concern is that there should be a surge in the bee population, but the trees are too quiet. I think the fig tree is scoffing at me. It had such a great surge that I had to cut back branches tall enough for ten foot poles. What’s left is looking reluctant. We’ll see.
I didn’t plant onions and potatoes last year. I planted them years ago, and gave up. They grow, but they don’t grow very large. My naturopath is steering me away from potatoes, and onions can be cheap; so, the loss would be small. They don’t care. They’ve overwintered and are sprouting in the spring warmth. Don’t let me get in the way. That’s probably best.
Fall was months ago, so I excuse myself for forgetting that I collected seeds from a tiny crop of squash, peas, and beans. They all grew, but not enough to make many meals. So, I harvested the seeds, set them aside, and forgot about them. I don’t know if they will grow. That puff of dust or decay that arose when I touched them suggest they may have rotted, but I planted them anyway. 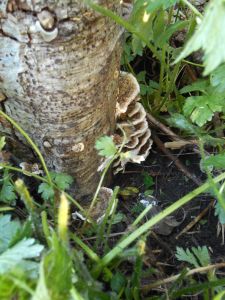 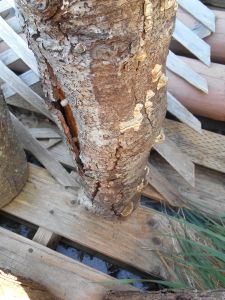 may finally be sprouting, but they may have lost the battle to a different species. My mushroom logs were planted so long ago that I forgot what they’re supposed to look like. I expected mushroom shaped mushrooms. Instead, some look mushed. Others look like tree fungus. I’ll check with the experts before putting one in my mouth.

New stalwarts
The main inspiration for the container garden was hot house plants like tomatoes and peppers. My deck is backed by west facing windows. The deck gets hot. Rather than fight it and complain about it, I decided to treat it like an outdoor greenhouse. Prop the pots on wire pedestals and the slugs can’t climb the skinny wires. Water regularly. Pick up the pots if the wind blows them down, and wait for August. No need to change that strategy. It’s working.

I’m trying the peas and beans again. Last year I extended the wire pedestal idea by making a ten foot tall wire hoop with the pots inside, elevated beyond bunny reach, and with plenty of room for the vines to climb. The engineer in me made sure it was stable despite being very light. That worked, but the hoop made it hard to get to the plants for watering and weeding. This year, the hoop has become a half-hoop, a tall semi-circle of a cylinder. Maybe better access will make them grow and me garden better.

Dirt is cheap, or at least I bought a lot of it when I bought the property. I’ve got about 8,000 square feet of dirt. Ironically, dirt, really soil, is the only thing I paid full price for. The pots were donated by a neighbor – as they were on the way to the dump. The heaviest wire is from a scrap pile at the building supply yard. The lighter wire was bought at retail, but is cheap and plentiful. The seeds were bought on sale. One of the wonders of this world is that plants want to grow. We just have to remove their hurdles and get out of their way.

I’m slightly sore. It’s that good soreness that suggests good work was done, and that more such work would mean not being so sore. The Gig Economy has cost me some physical fitness. It will be good to get it back. Of course, now that the heaviest lifting and digging is done, my kind of garden becomes no more than weeding and watering – and apologizing to my garden for when I don’t do either enough.

Each year is a new opportunity. Every past year is a course-load of lessons. They teach, but I have to learn. And not just learn, but act on what I now know. Check back in a few months to learn if I learned anything.