Pardon me while I sweat. Better get some fluids before I dive much further into typing. It’s 81F in the house. A fine day for whacking weeds for Whidbey Camano Land Trust. Kyle, the Stewardship Assistant, invited me as Site Steward to join him in an afternoon of repelling the invasive species. Today was a day to use the noisy, gas-powered equipment that is a little too aggressive to use in larger work parties. It was a day to sweat, get some work done, and be reminded of the power of patience – unintentionally.

Earlier this week I had an interview. It would be great if it was for a job, but it was for a reporter who is writing an article about 40 year mortgages. She stumbled across my blog and some of my earlier posts. She asked good questions for her article and inspired me to ask myself good questions about my progress towards financial security. She has a deadline. I can take more time considering my answers to my questions.

I’m almost at the six year anniversary of my Triple Whammy. The traditional gifts are candy and iron. I’m sure my naturopath has an opinion about candy. Iron powered by petroleum was what I got to play with today. Call it a different kind of sweet crude and call is close enough.

I’m also at the three year anniversary of being able to keep my house. The fight with foreclosure was successful, though the specific date depends on your preferred perspective.

Like many people recovering from the Great Recession (which I consider the Second Depression), some things are better, some things are the same, age dictates that some things are a bit worse. Add them up and life is better. Compare the sum to what’s sustainable, and call up my Litany Of Optimism and Backup Plans. Want details? Click on those links. Both the Litany and the Plans are extensive.

If the Litany and Plans are so extensive, why isn’t the sum more than sustainable? Welcome to my daily debate. Welcome to the debate that many must maintain for themselves.

Many of my managerial, consulting, and coaching friends have analyzed my situation. The general consensus, great potential that is unrealized, yet.

It is the ‘yet’ that is the key. For anyone that is pursuing a personal strategy there is a question that can’t be resolved in advance. If the strategy sounds good but the results haven’t succeeded, does that mean it’s time to try something else, or it’s time to keep trying? Is persisting something to give up or continue? 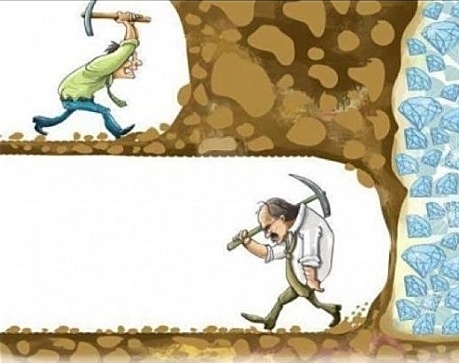 Logically, I have an understanding of my potential. There are many things I can do, but my passion is for people and ideas. I enjoy listening to creative and entrepreneurial people, and helping them pursue their projects. I enjoy consulting more than climbing a peak or dancing to a big band. Getting the business started is the hard part, not just helping others succeed, but spreading the word about their successes while being necessarily discreet. In the meantime, I get to enjoy a second skill, writing. Its inspiration is people and ideas, but the goal is communication instead of strategizing. Those are my potentials, passions, and skills. Everyone has a set. I watch many of my friends pursuing theirs.

Emotionally, it can be difficult when the pursuit doesn’t flow. In modern society, the easiest way to make the process flow is to lubricate it with cash. At least for me, having an extra million made it easier to start new careers back when I didn’t need to. Now, there isn’t as much out there smoothing the way. Some days it seems every step is fighting friction. It’s tiring.

I’m tired as I type, but that’s because of the weed whacking. A couple of hours of that, a long walk there and back, and being a bit out of shape means it feels good to sit down. Luckily, the weed whacking happened in a place that provided a lesson.

We worked at Hammons Preserve, a nine acre farm that was made part of the Land Trust by the farmer. I’ve been Site Steward there for over eight years. The general goal is to keep some pasture as meadow, some wetlands as wetlands, and allow the rest to revert to forest. (Want details? Contact wclt.org.) One of the first tasks was to take out several loads of the sort of trash that accumulates around a farm. The site was left with a shallow slope and an opportunity. In came the weed barriers and native plantings. For over seven years I’ve taken photos from the same spot, an irregular time lapse photo essay of the efforts of volunteers, nature, and time. Today, I took the same photo, as usual. It didn’t look much different from the last time. It looks much different from the first time.

As the native species were planted, the biggest thing in the view was a burnt stump. Without the trash, and as the plants grew, a stream began to flow from the stump, almost as if it had a pump installed by a landscape architect. More plantings, more weed whacking, more cursing the deer for eating the saplings, and eventually the plants established themselves. Then, the stump was obscured by willows and grasses. Now, flowers upfront grab the attention.

Nature is patient. Nature persists and perseveres. The Land Trust may help, but time and Nature do most of the work. The Land Trust decided on a direction, gave it some momentum, and now that portion of the land is naturally far more sustainable than it was before.

I’m tired. My fingers are telling me that it’s time to rest. They’ve had enough repetitive activity. I sit here encouraged by the power of patience and perseverance. I don’t know that I’ve picked the right direction, but it feels right. I probably just have to practice patience.

And, maybe mix myself a tonic with ice cubes, a lime, and some other select fluids. That sounds sweet.