Ah, the sweet sound of a machine doing the dishes. It’s been over five years since my tiny dishwasher turned itself into a complicated dish drying rack. The motor wore itself down until all it could do was make a grinding noise. It was one of those little household events that should’ve been innocuous, but instead sits as a milestone for the financial situation I’ve been in since then. Thanks to a local variation on craigslist, I have a new, old dishwasher. Pardon me as I load it up for a second time today, just because I can. Let the celebrations begin! And, let something simple provide insights into personal choices.

I can use my past strainer again! I forgot about that.

Simple things have pervasive effects. Sure, I can wash dishes by hand, but being a consciously frugal person made me reflect on the ways it changed my life. Dishwashers are labor saving devices, but not by much for me. Washing dishes by hand takes time, but time how long it takes to load, arrange, and basically manage the labor saving device and find that that difference isn’t as great. A dishwasher isn’t instantaneous, doesn’t pick up the dishes, can’t feel for leftover dirt, and won’t put anything away. A dishwasher doesn’t take care of everything, either. Knives, wine glasses, bulky pots, and wooden utensils are going to get the old-fashioned treatment.

The biggest impact I saw was the way I cooked. A Cuisinart (another garage sale find) or a mandolin (the thing with the slicing blades, not the musical instrument) may cut finer, faster, and safer; but cleaning those complicated blades by hands takes care. Accidents happen. Instead, I’ve almost always used regular kitchen knives. They’re a caution, too, but at least they’re easier to handle and clean. One consequence, I gave up on making my own (healthier) potato chips for a while.

Health, or at least sanitation, is also different. I’ve wondered how many upset stomachs weren’t from the food but from something I didn’t clean well enough. There’s no way to know. There is, however, some security in knowing that the machine is going to do roughly the same level of effort every time. At least some minimums are established.

Environmentally there’s a difference, but it has more to do with the person than the machine. One isn’t always better than the other.

Little things get overlooked and accumulate. It is easy to get used to that stain or to quit using something that’s too hard to use. Getting a hand stuck in a tea pot or a commuter mug may make a great video or an entry in the police blotter, but the possibility is one more reason to not look past the lid, or put something on the shelf for a while. Finally, small pleasures like using my favorite mug are back.

The reason for the second cycle today is to clean some of those things that I take for granted: that tea pot, the dish rack, a second try at the commuter mug (which didn’t get clean in the first cycle.)

Emotions aren’t ruled by logic, even while they use logic to rationalize feelings. Back when the dishwasher broke, the numbers already told me that I was in financial difficulty, but the realization that I couldn’t afford to fix something as simple as a basic appliance felt like a critical failure. I like being a responsible person, and here was something that I couldn’t respond to. It became the first in a long series of deferred maintenance and MacGyver’ed repairs. Hearing the dishwasher throw water and soap at things I want cleaned feels like one of the first steps in the end of an era. A bit of luck, a bit of money spent for installation, and a bit of “normalcy” returns to my life.

It all happened thanks to drewslist, the local and better variation on craigslist. I’ve described it before, but basically it is a small town email (and now online!) service that lets people post jobs, events, housing, classes, carpools – about a dozen categories. One of my favorites is “For Sale, Wanted & Free”, particularly the Free part. Remodel projects, downsizing, relocations all free up and create a flow of used stuff that may otherwise go to the landfill. Skinny, compact dishwashers rarely come up, but here one was for free. Yay!. And it works. Yay!! All I had to do was pick it up and install it. 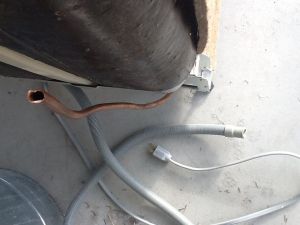 The frugal and resourceful part of me would like to say I’d installed it myself. I tried. Unfortunately, the two dishwashers had completely different electrical and plumbing attachments. Listening to the old dishwasher throw sparks as I pulled it out didn’t help my confidence. Helping at a Hearts and Hammers event (a local variation on Habitat for Humanity) provided great evidence of the power of a leaking dishwasher. New kitchen floor and joists, anyone? I paid for two pros from Bayview Appliance to install it and carry the old one away. The good news, it works. The not so good news, I’ll have to devote about three days of my business revenue to pay for their one hour of effort.

Frugal living runs into such quandaries and comparisons. Is washing dishes by hand good enough, or does it come with missed opportunities? Even when something is free, is it cheaper to make it work by spending time, or by spending money? If the appliance works great, then spend time. But the risk of something going wrong can cost ten times the price of a new appliance. We can only guess at risk. There are no guarantees, except possibly when someone is paid to do the work.

Small things are more important in a frugal and minimalist life. The downs and ups I experience may not register with someone who could replace an entire kitchen because they didn’t like the color of the sink. Personal experiences, like personal finance, are personal. If it feels like a celebration, celebrate. Don’t care if no one else cares. A frugal life is one based on respecting individual needs and wants, and not living according to what some marketer puts into an ad.

I can already see one or two reasons why the previous owner upgraded. A few items still had dirt after the first cycle. The inside has a patina thanks to twelve years of use with well water that has lots of minerals. I can also see why I’m happy and relieved to yet again be able to do something as simple as delegate one more task to one more machine. It’s one reason I’ve been able to write this post. Ah, to dream of putting the next messy roasting pan into the magic box and letting it deal with my style of long, slow cooking. 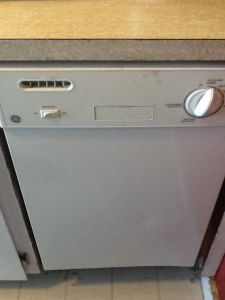