As if Whidbey’s reality isn’t virtual enough, virtual reality has come to Whidbey. Virtual reality rigs are slowly making their way into homes, offices, and classrooms; but sometimes it takes a champion (who wouldn’t give themself such a label) to make a new idea available to everyone, not just early adopters and uber-geeks. For the last several months, I’ve been informally and casually working with Ethan Bishop (in other words, we kicked around a lot of ideas when we had the time), someone who understands this new world, understands its software, its hardware, and what’s coming next. In a classic case of great ideas trying to find enough money, or least an opportunity, to turn thoughts into actions, Ethan’s managed to create a uncommon experience in a place as uncommon as Whidbey. We’re both wondering where his new initiative will lead him. From what I’ve seen, this is a moment that reminds me of the introduction of the Macintosh, and the moment when America Online opened itself to the Internet. I wonder what it will me for me, too.

Trying to explain virtual reality is like trying to explain the personal computer when everyone thought a computer had to be the size of a room and dedicated to scientists. Personal computers seem obvious now. They didn’t thirty years ago. Any yet, a bit of patience then and now means many people will become familiar with the experience very soon. The concept is potentially that pervasive.

I’ll skip the long list of examples and stick to one that I’ve mentioned before. Imagine a blending of the virtual world called Second life and the social media world of Facebook. Now, you log in to see little icons of your friends, read a few words from some, see a photo or an album from someone else, and check out their very polite and never political posts. It can still seem silly, and yet billions use it. Welcome to a larger community that can simultaneously be superficial and deep. Facebook is already considering a VR version of the experience. Put your headset on, and see your friends (or at least their avatars), talk to them, dance, play games, go places. Be in a place with them, and instead of being a spectator, stand in a panoramic view and point out things together.

I get ahead of myself. But, that’s also what I do. I watch trends, see which ones can run the farthest, and hopefully benefit from the knowledge and insight. With the Mac and AOL, I was able to do that by buying stock. (Want details? I wrote a book about that, and more. Dream. Invest. Live.

) This time, I’m not sure how to engage with the momentum.

If you get the chance to try out any VR rig, go for it. Keep in mind though that many of them are like the first computer screens, low resolution and a bit jittery. Keep in mind that many of them are like dialing into the Internet for the first time, odd protocols, slow connections, and bizarre interruptions. Google Cardboard is a good intro, so are the units from Oculus (Facebook bought them). Ethan’s rig is a Vive system good enough for him to use it for games, but also for designing parts that he then prints in 3-D. 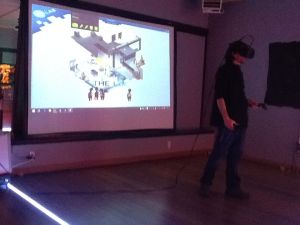 We tried a variety of venues where we (largely he) could set up his rig and demonstrate it. The goal wasn’t exclusively altruistic. This is an opportunity to provide a benefit in return for compensation. The industry is so new that an obvious business model has yet to emerge. Some of our venues may succeed, or not. In the meantime, Ethan independently arranged to create an arcade in a very retro and very cool pinball arcade. (Dozens of original pinball machines carefully renovated by Tim Leonard and lit up in an arcade two block from “downtown” Langley, are worth a visit on their own.) It’s a good match, it made the front page of the local paper, and I was glad to see it and get a chance to visit.

People may line up for games. I watched a kid have a blast simply throwing a virtual stick to a virtual dog on top of a very realistic local mountain. No need for anything more exotic than that. When I tried that experience a few months ago my brain knew I was in a room, but my senses convinced me I could fall a long way.

Watch an artist get the chance to paint in 3-D, and to walk inside the artwork, then scale it down to the size of jewelry.

For me, I want to use it for design, invention, and would thoroughly enjoy wading through datasets and computer visualizations of physical phenomena.

When I first used a Mac I knew it would succeed, and that I had to have one. When AOL finally added a button for the World Wide Web, I remember telling someone in the room that this will be as big as AT&T. I had the same reaction this time.

And yet, I haven’t gone into debt so I could buy stock in the various companies. The Mac had no real competitor. The sea of PCs that swirled around it made more money, for a while, but picking a winner was difficult. AOL stood alone and was a simpler choice, but it went through years of unprofitability before succeeding as a stock and a company. I don’t know if Vive will be the ultimate victor, and suspect the industry has yet to find the key hardware, software, and marketing that will succeed. Wireless is an obvious upgrade. Resolution and response times will improve, and are almost good enough, but not quite. Hand controllers (because there are no keyboards) continue to evolve. I suspect a major benefit will be a headset that can be made opaque, translucent, or transparent with a switch. (I think MicroVision has great potential here, but then I think that about them in many industries and applications.)

This is VR’s training phase. Computers and the internet both went through phases when early adopters were paid to help others adopt and adapt to the new technologies. Ethan’s already doing that. (He also builds and sells rigs for others.) I look forward to helping. Yet again, technology creates a Wild West frontier where there are lots of opportunities, a great uncertainty about the rules, and a lot of pioneers who may get lost along the trail.

My frugal self looks forward to this because of the opportunities for creating things in 3-D and then printing them. The part of me that is passionate about people and ideas looks forward to learning about the technology and introducing others to it. The investor in me is watching for the companies that have stock that are engaged in the trend, not just watching and wondering about it.

If you get the chance to drop in on Tim Leonard’s Machine Shop (630 Second Street, Langley, WA 98260), check to see if Ethan and his equipment are there. It’s worth the trip. If Ethan isn’t there, bring a bunch of quarters. The rest of the arcade is awesome. Of course, I’m assuming they still take quarters. I had a pocketful but had so much fun talking to Ethan and using his rig that I never got around to playing pinball. 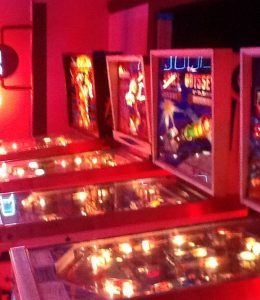 1 Response to Virtual Reality On Whidbey