I admit it. I am worried. I’m familiar with the ways that big systems work. When a system is big enough, it makes more sense to trust the data more than the rhetoric. When key measures depart from the norm and show no sign of changing direction, there’s a good chance the system is unstable. Oxfam released their annual update on wealth inequality. Since 2010, the number of people who own half the world’s wealth has dropped from 388 to 62. A key resource to the world’s economy, wealth, is accumulating and concentrating, and showing no signs of stopping. If wealth inequality isn’t destabilizing the economy, it is a visible symptom of an economy that is unstable for other reasons. Both possibilities are probably true.

Within the last hundred years, the super rich have been able to extend their reach around the planet. As civilization has monetized and urbanized, the poor are increasingly under the control of landowners and employers. People complained, and fortunes rose and fell, but the impact remained limited by country borders. Much of the wealth was sovereign wealth, wealth held by royalty and partly represented by the wealth of their realms.

Within the last few decades, wealth has extended its reach through globalization, and globalization has been amplified by technological advancements in transportation and information. Now, non-governmental institutions have accumulated enough wealth and influence that lenders can dictate government policy, forcing austerity and diminishing nations’ support of their citizens. Much of the wealth now effectively exists outside the reach of realms, countries, and governments.

Those trends are largely rhetoric, which means they can be argued and debated without resolution. (Though, if someone has the data, please share it.) 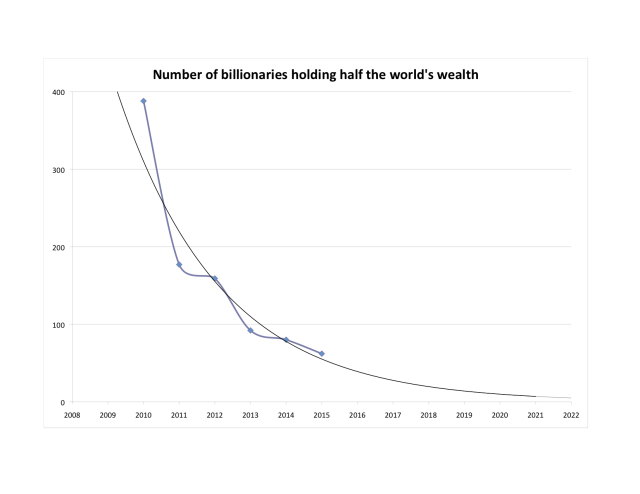 When a system is exhibiting such a trend, the only thing that limits it is a change in the system or a failure in the system which creates a change uncontrollably. Either people decide to make improvements, or the system fails and people have to respond to a messy situation.

At this point, I am hearing rhetoric about change, but finance reform remains rhetoric, not action. That leaves me with the expectation that the system will fail, and possibly soon.

The trouble with our understanding of our economy is that we may not have calculated the critical number at which wealth concentration creates the instability that fails the system. Some think we’re already past it, and that the failure is in progress. Others think that wealth inequality is a natural consequence of the system, is not inherently worrisome, and will self-correct if necessary. I think that the critical point of failure is passed when some percentage (x%) of the population holds half the wealth (though it could also be something like 25% or 75%). We don’t know the number, and may only know the number in retrospect. In the meantime, we’ve passed from a time when the number of people holding half the wealth could easily be expressed as a percentage and now can be expressed as an integer, and that the integer is a number smaller than the capacity of many restaurants. Within six years, half the world’s wealth may fit on one motorcycle.

I’ve been tracking wealth inequality for years. (It is common thread on my other blog; PretendingNotToPanic.com) Last year I posted to this blog as a result of Oxfam’s report. This year, wealth inequality, commodity crashes, private wealth bubbles, cash being stored as uncommon assets, and negative interest rates convinced me to convene a salon of interested individuals – and I was going to get to that right after my birthday. If you read the previous post, you know I’ve been busy. In the meantime, the stock markets are ailing and joining other asset classes in a global retreat. Holding a salon to consider actions in 2016 is becoming moot.