My key chain just got lighter. The two keys that got me into the coworks were turned in because the coworks closed down. For almost two years The Langley Coworks has been my office, really just a bit of wide counter space beside a window, but it was my base of operations through some of the most difficult times of my life. It was also the opportunity to work in Langley without having to spend hundreds per month on rent, or subject myself to ergonomic and auditory contortions trying to work from a coffee shop. For whatever reason, it couldn’t survive, at least in this incarnation. The idea is sound, though, and is indicative of the new world of work. 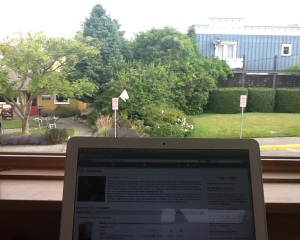 A coworks is a simple idea, yet was probably too simple for people to consider it seriously at the start. Just like many people who thought Starbucks’ high-priced coffee seemed like a ludicrous idea, coworks tap into a trend for a redefinition of space. Coffee isn’t something to get for the lowest cost and the greatest convenience. There’s a value to quality, and the right environment. I saw that, drink tea instead of coffee, and still bought into SBUX as soon as possible. It was the third place that mattered as much as the beans. No particular coworks company may command such a broad appeal, but there’s a demand for places to work that aren’t the traditional office or working from the kitchen table. Conventional corporations are encouraging employees to work elsewhere. It may be sold as freedom, but it is also a cost savings to the company.

Ideally, a coworks does more than provide a desk and some wi-fi. That’s the essence of why they work; but the additional draw has more to do with the sharing economy. A community sharing a resource can become more than just a collection of individuals. Coworks bring people together, and mix them up creating connections that are random and that can also reveal unexpected opportunities. Coworks in Seattle and other large cities gather crowds of hundreds. A coworks in Langley gathered, well, many times there weren’t even enough to finish off a six-pack. And yet, collaborations happened. It is the only reason I came across my second substantial client: Curbed Seattle.

Working from home works, as long as everything is handled over the internet. I don’t have to share bandwidth. I can wear what I want, and can swap into a good shirt if there’s an online meeting. During my rare breaks, I can do some chores or get in some exercise. It’s nice to be able to match my works schedule to the tide charts and sneak in a low tide walk. It’s definitely cheaper to work at home. Skip the commute costs. Lunches are more economical. There’s no extra rent, or need for double sets of office supplies. Phone calls can go on without interrupting anyone. And, all of my stuff is here, not divided by ten miles.

I’ll miss the bicycle commute (which was put on hold after my computer developed a glitch), the sound of the lunch crowd and the smell of bacon coming up from The Braeburn downstairs, the baristas calling out the orders and the smell of coffee roasting at Useless Bay Coffee Company, the crowds hanging out while a band cranks up at South Whidbey Commons, and the Second Street Market that closes the street and fills it with people and art and food in season. I’ll miss taking advantage of knowing the timing of the sales in the Star Store grocery. I’ll miss being able to take a break by visiting friends who work their businesses in town. 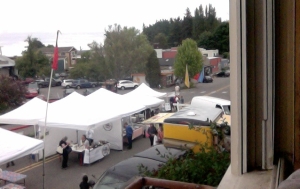 Coworks are a recent innovation, and some implementations will succeed, and some won’t. Innovation is like that. One of the most important things was that someone was willing to try. The folks at Fusion Spark Media ran the coworks, and also knew when to stop running it. For some reason it didn’t quite become self-sustaining, or at least wasn’t as strategically aligned with the rest of their business.

Society succeeds when it tries things, learns, and then adapts the concept before trying again.

Take a look at most coffee shops. The people are are likely to be spending time with their devices as with each other. The mobile workers are either positioning themselves for a good wi-fi signal and maybe a power outlet, or are paying for cell-phone data transmissions and hoping their device’s batteries last. If they want privacy, they have to rely on lots of background noise, or expert whispering. But, at least the coffee is good. Just make sure to time conversations to miss the hiss of the espresso machine.

While I’m dreaming, I’ll add a bicycle garage, a locker room, and a shower, but that’s because I prefer to exercise on my commute, and to not impose the olfactory results on my neighbors.

Society is changing, including the nature of work. Spaces where we can share resources, opportunities, and support may become as ubiquitous as coffee shops because the era when everything, including a life-long string of paychecks, was paid for by an employer is passing.

The coworks is closing. Long live the coworks.

3 Responses to Long Live The Coworks