Walking Into A Frugal Spring

Spring is here. It is knocking on the frugal storm window in the bedroom. The sheet of plastic is popping as winds from the south blow in the new season. March’s lions and lambs are secondary to getting me, my house, and my yard ready for growth. The potatoes, apples, and raspberries are looking healthy. So are the caterpillars, the slugs, and the hopeful deer.

Silly human. I scoff at your fencing.

The shift in the season is happening whether I do anything or not, so I guess I should spend some time tending my home, my base. I’m doing so as frugally as ever, by necessity as much as by choice. That’s true for this spring, and true for this recovery.

Here’s a measure of my frugality. Yes, I’ll try to squeeze every last bit of toothpaste from the tube. No, I won’t slice it open and scrape down the insides. 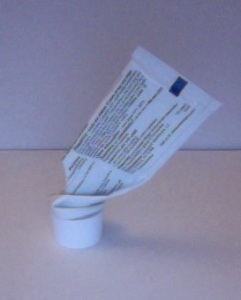 I’ll finish my plate, but won’t lick it clean (unless we’re talking batter in a bowl after baking.) Frugality taken to an extreme can save money but cost too much time, and time is too precious to waste. When frugality was from choice instead of necessity, I’d spend more money to save more time. When frugality is from necessity instead of choice, I’m more likely to decide not to do something than I am to try to squeak in some activity by barely clearing its hurdles. That level of tightness costs too much in emotional energy.

The fence fell down – again. Of the twenty sections, eight have fallen. I can take a hint. After I’ve saved up some money after paying my taxes (wince and groan) I hope to buy some simple metal wire fencing to replace the appealing yet faltering wood slat fence. In the meantime, the gaps are filled with a bit of chicken wire, some deer fencing, an old pallet, and some 2x4s propping up a few sections. The necessity is keeping the deer out, so that this year I get more than two apples and a handful of figs. Chicken wire will have to guard against rabbits. Vigilance and acceptance will have to guard against the caterpillars and the slugs.

Almost everything I’m growing is either a perennial, a volunteer, or a start from a friend. I hope to grow a few things most people skip: ginger, mushrooms, and maybe some gourds. My friends are better at the veggies, and my neighborhood doesn’t allow the tall nut trees I’d prefer. But, I’ll grow what I can, how I can, even if it means growing some of them indoors.

My community of friends are a frugal bunch, though I suspect few would give themselves the title. We live in a semi-rural area. The rural comes from the low population density, reasonable soil, plenty of rainfall, and relative lack of development. The semi- part comes from the proximity to Seattle, which makes the south part of Whidbey Island a commuter’s community too. The people working in ‘Merika may be the biggest source of income for the island. Tourists are obvious, but commuters are here throughout the year. The frugal folk, however, frequently are the ones trying to earn a living on the island, and fill in their resource gaps with impressive gardens, arts, crafts, and services. They may also be the ones best prepared for a shift in the financial climate.

The gardens may look a lot alike, but the motivations differ. Some grow their own to get the best food possible, without having to spend a lot of money on ‘organic’ or spend a lot of time making sure the food deserves the label. Some grow their own food because they can’t afford to buy it, organic or not. Some, of course, grow their own for the joy of gardening – or in at least one case, as a way of spending less time in the house with the spouse. Almost all are aware that, if some disaster was to hit the island or our greater civilization, what they grow will become vital and much more valuable. Enough people here are globally aware to be concerned. It is sobering to see the diversity of topics that all lead to the conclusion that growing your own is a good idea. We also live in an earthquake and tsunami zone and realize that emergency responses will probably start in downtown Seattle and only eventually reach the island. Some wind storms have knocked out power for days. A disaster that damaged the ferry terminal would mean an even longer recovery time. The response times for Katrina and Sandy were educational.

Our economy is coming out of a winter as well. The data are so confused that it is hard to say whether things are better or worse; which is probably an indication that both are correct but for different people. Unemployment is down. Yay! Employment is also down. Huh? There are fewer people in the workforce now than there were in 2007, before the Great Recession. Spring can feel like winter in the morning and summer in the afternoon, and maybe what we’re witnessing is a bit of that economically.

Interest rates are low, but so are the rates on savings accounts. Inflation is low, but only when measured against an artificial standard of living. For some, inflation is much higher. For some deflation happens. For most, it is a mix.

The worry is that, while physics enforces the return of summer, economics does not ensure the return of prosperity. If the consensus was that happy days will be here again, then there’d be less emphasis on fences, bug defenses, and viable seed supplies.

I fantasize about winning the lottery jackpot, and make sure I have a ticket. A persistent realization is that, my intuitive response to winning the lottery would be to switch my frugality from necessity to choice. I see mansions for sale, and find nothing that appeals to me. Maybe if I won I’d change, but I’ve had the big house and watched how much of my time it cost. I see acreage for sale, and appreciate the land that is workable, and am not drawn to great expanses of lawn. A view would still be nice. I see new cars drive by, and realize I’d rather fix the truck, and maybe get a smartcar, scooter, or better bicycle. The best use I see for the money is to undam my plans, regain my health, have fun more often, and provide some real security – the type of security that matters when the infrastructure isn’t secure.

I return to the totally unofficial movement I’m witnessing: the Walk Away Movement. As power, water, sanitation, food, and communications become more decentralized, people are incorporating that potential into their household. The counter-movement, which is gaining far more attention, is the extreme urbanization in evidence in places like Seattle. As our society bifurcates along so many lines, yet another division is along self-reliance versus complete dependence. If we know we’re heading to a summer where everything is warm and growing, the complete and mutual dependence may be the better bet. If, however, economics isn’t as reliable as physics, then I’ll be glad for good deer fencing, homegrown mushrooms, and a lot of practice at frugality.

I wonder if I could brush my teeth with a slice of ginger?