Why? Why Like, Follow, Plus, Connect, or Subscribe to someone? Why not? It’s free, isn’t it? It’s worthless, isn’t it? Skip the pleas from Facebook, Pinterest, Twitter, Google+, LinkedIn, and WordPress and Blogger. They aren’t free, really. They aren’t worthless, really. Concentrate on the first word, social. That’s as free and as worthless as it ever was or wasn’t. If can find a reason to be social, you’ve got a reason to use social media, probably.

Social media has become such a part of most people’s lives that it has fallen into the category of “things we can all complain about everyday”. There are enough topics to avoid in polite conversation, but letting loose about what’s wrong with Facebook is fashionable; and no one comments on the paradox of then passing along a bit of news from your network of friends. We are social creatures and this is just another way we’ve invented to connect with each other.

The difference with each of these inventions is that someone, some corporation, owns it. We’ve probably been social since before we invented language, but the majority of those social interactions were free, or only cost the price of shared meal.

Shared meals, parties, festivals, and rituals were all things that brought us together. They also became opportunities to do more than share stories. People bartered, collaborated, debated and tried to extend their group of friends. Within the last few centuries that spawned country clubs, secret societies, even chambers of commerce – places where people gathered to indirectly encourage each other’s business. There was a lot more going on, but a lot of socializing was driven by the need to make a living.

Just like socializing, social media isn’t limited to business and money. Every topic is available. I imagine that there are even online discussions about how there shouldn’t be online discussions. Social media on the Internet is amazingly empowering because any topic can be raised, if the right venue is found, and the audience isn’t limited to only those people within walking distance of the pub. The advantage for entrepreneurs and advocates is that audiences and markets can be built by pulling together even small percentages of what has become a very large population.

Social media is, however, very different from socializing. This invention called social media is a tool owned and operated by corporations that want to make billions of dollars. Their paradox is that they can’t make any money unless we use their sites, post bits from our lives, and interact with what other people post. They’re driven to a business model based on offering free services, because otherwise a competitor could underprice them, while then trying to find some way to make money by selling information about our habits, or from businesses that want to advertise more cheaply and more directly than any other venue.

There’s enough reason for distrust that the offer of “Free” usually raises doubts and questions. We know we’re paying for it somehow. Each of these sites asks us to post private information, and then asks us to trust them as they sell that information to others for whom we have even less basis of trust. As if that wasn’t unsettling enough, many of the sites are now encouraging us to pay for premium services, or pay for apps like games or archives.

So why use social media?

The biggest reason I use social media is social. People, communities, and discussions are worth what any conversation can be worth. Finding a good deal, maybe a free exchange, may save a few dollars, maybe a few hundred. Businesses and non-profits know that to reach customers and funders means reaching as many as possible because success rates are small. Multiply a small chance by a big enough set of chances and chances are something good can happen. Investors gather to compare notes, analyses, and sometimes to commiserate; and those conversations can be worth – well – millions, honestly. (Check out my semi-annual portfolio review of a list of links to forums.)

I use social media to keep track of my friends and let them keep track of me at their convenience. Within my neighborhood we’ve used it to track construction progress 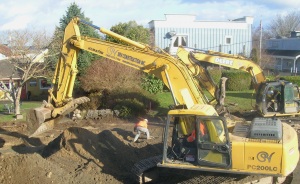 , map power outages, rally support for someone in sudden need, organize parties, and sometimes just to check how long the ferry line is today. For my clients I use social media to get their message to their advocates, and beyond, establish collaborations, and find new sources of funding. For my business I use it like any other business, to announce my goods and services to as broad an audience as possible, while also making deeper connections with those that like what I do.

I don’t have accounts on everything. That’s an inefficient use of time. Social media is maturing, so some sites get abandoned while others get added, tentatively. I also don’t say the exact same thing on every site. Never changing your tone or talk is boring in any social scene. Within the last week I shared the fact that a photo had gained prominence as the new “most viewed” photo on one of my galleries. 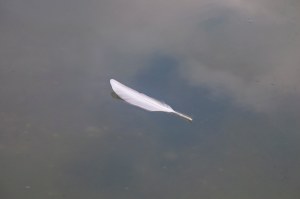 On my business’ Facebook page the announcement was more open and casual. On LinkedIn my target audience were the people who buy art for decorating businesses. On Google+ I knew I was targeting Google’s search engine, rather than any individuals, so that post had more tags. On Twitter the photo would take up some of the 140 character count, so I kept the rest very short. I’ll do something similar with this post. I also like that sites like Klout let me see where my messages reach, and suggest ways to make them reach further.

And there are cautions. Social media is so changeable that I don’t rely on any one site, only post what I’m willing to show the world, only post lower-resolution images or watermark the higher quality versions, use lots of pronouns instead of individuals’ names unless they are actively interested in getting their name spread wide, and step away from the glorious time sinks of viral videos, games, and quizzes – except when I need a break.

Of course, we are all individuals. I like that about us. I especially like those of us who make up our own minds, use tools as appropriate to benefit ourselves and each other, and who know that – just like in socializing, a bit of maturity is very welcome even in places as immature as social media.

PS Want to hear more? Thursday night at the old Bayview School on Whidbey, I’ll be part of a duo (Dan Pedersen is the other half) talking about Social Media, particularly for writers. $5 if you’re not a member.