I am number 1! Yes! That hasn’t been the case lately. Lately I’ve been #2 at best, and in job searches coming in second is the same as coming in last. But this year, just like last year, I am number 1 on the map for the Whidbey Island Open Studio Tour. Geography helps. I live near the southern tip of Whidbey and the Tour organizers had to start somewhere. They started with me. Excellent. The Tour exists so art enthusiasts can visit artists in their studios, and so artists can interact with the enthusiasts where the art can be described, exhibited, explained, and demonstrated. Oh yeah, and sold. The Tour is also an opportunity to see the wide range of lifestyles, types of success, and challenges that keep artists from being easily stereotyped. The Tour is populated by fascinating people and can’t be dull. But it is free! (October 6th & 7th See link for details – in case you didn’t plan to read the rest of this post.)

The world is becoming more artistic. People are expressing themselves more. Part of the reason for the wealth of expression is the ease with which people can create things now. The growth is easiest to see in publishing words, pictures and music as the digital revolution sweeps through books, movies, and music. Fill a computer with lots of bits, spend a lot of time (though maybe not much money) rearranging them, and then reformat them for paperbacks, e-books, YouTube, or iTunes. I’m glad to watch it happen as I teach classes in self-publishing, or consult with creatives who are producing stories in a variety of formats. I think the Tour has become more engaging because the art enthusiasts are more engaged, and more appreciative of other artists now they’ve created something of their own. Oil painters, sculptors, weavers, ceramicists, et al have not been replaced with reordered electrons. Their creations, efforts, and perspectives are necessarily unique and interesting, and why I enjoyed taking the Tour when I could.

My story, and my stop on the Tour, are unique too. My studio is really just my living room reconfigured to accommodate 100 to 200 visitors over the weekend. My real studio is the waterline along Whidbey Island. For five years I’ve photographed the overlooked nature, as one person put it, “the everyday beauty that the locals see through the rest of the year.” I’ve produced twelve month photo essays at five places that encompass the island: Cultus Bay at the southern tip, Deception Pass at the northern tip, and three places inbetween: Double Bluff, Admiralty Head, and Penn Cove. 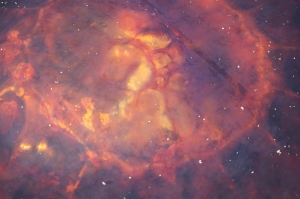 That is a lot of work and no gallery has the space to show all of it, but for two days people can see all of it. The Tour is one of the best chances to see my work as a complete story. Maybe someday I’ll rent a space like the Whidbey Institute and produce a very large exhibit with shows and music, but I’ll have to sell a lot of photos before I can afford a venue that nice.

Money wasn’t the main motivation when I started the series. I suspect that is true of most artists. Money was enough of a motivation that I wouldn’t have proceeded without it, but at that time I thought my stocks would suffice and that I could produce something no one else had produced: a large, organized body of work devoted to Whidbey Island. I had just completed something similar for the Washington Cascades (Twelve Months at Barclay Lake, Lake Valhalla, and Merritt Lake) though that was primarily narrative – and the inspiration to pursue my photography. 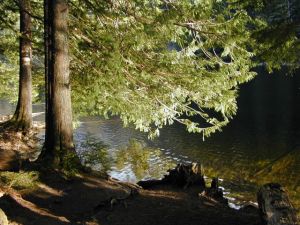 In both cases I saw that I could chronicle more than a sunny Saturday in August and show from one perspective one of Nature’s cycles across a variety of environments. No one else had done that in the Cascades or on Whidbey. I thought Nature deserved a broader voice. I could use mine, so I did. Then the economic turmoil hit, my net worth crashed, and the money motivation rose.

Despite my need for money (yep, it’s getting tight here folks) I didn’t abandon the effort. I continued taking the pictures, paying to have them processed and printed, and publishing the gift books – oh yeah, and paying for my space on the Open Studio Tour. Any scrimping happened after the story was collected in camera. I’m not printing as much or as large. Like I said above, I’m not renting a space for a grand gala (though the premiere of Twelve Months at Double Bluff was nicely hosted by the folks at Raven Rocks Gallery, where the exhibit is up until October 3rd.) I’ve even had to hold back on the main goal, which was to produce a book of Whidbey photos, printed on Whidbey, and handbuilt on Whidbey by Whidbey book artists (a few are on the tour).

The other artists’ stories are as unique and varied. Some have international acclaim. Some seek only to express themself or a message and are on the Tour to show others how to unleash expression too. I’ve seen studios that are larger than my house, and small spaces shared by trios that must work in shifts. Each has different motivations, histories, and goals.

One reason I write is because much of the public discourse uses stereotypes and generalizations. That’s true about Nature and it’s true about people. Debates – Oops that’s the wrong word. True debates don’t happen anymore. Commentaries and conclusions are based on abstractions. Are all artists starving? Of course, not; though I know some whose life savings are the dollars in their wallets. Are all artists eccentric? No more than the rest of the population, though many in more corporate environments cover eccentricity with facade. Artist is a word and therefore has a definition, or at least suggests a distinction. It seems to me that artists are just like anyone except they are more willing to compromise the conventional aspects of an expected life to express something they think needs to be expressed. The expression and the need usually aren’t monetary, and frequently aren’t narcissistic. Many artists feel they are expressing something undefinable that wants to be expressed, and the artist feels humbled and honored to be part of the process.

Ah, such noble goals, but we all live in a reality as well, and in this society within this reality money is important. So is food and so are bills, and even the fanciest studio may not have had many sales these last few troubled years. Don’t forget to bring your checkbook. Most of us can’t afford credit card machines, or at least don’t have them in our living rooms or spare rooms.

I enjoy the Tour. Check out my posts from last year when I chronicled both days (Saturday, Sunday), a much easier task than producing Twelve Month essays. (Can you believe it? I’ve done these for eight years in a row!) Of course I enjoy sales. My mortgage company appreciates them more. But my passion is neither photography nor writing. My passions are for people and ideas. For two days I play host to dozens or hundreds of people who drop by to share ideas. As they ask me about me and my art, I ask them about them and their lives. I may be number 1 on the map, but that’s true for each of us, and I enjoy finding that map within each person. While you enjoy meeting my art, I enjoy meeting you. Come on by.

Oh yes, and returning visitors know to look for other large piece of art. I painted my deck again.

And don’t forget, there’s a piece of art with a large price tag out front. My home is for sale. Buy that piece of art and I can make a lot more art, or at least pay a lot of bills.

1 Response to I Am Number 1