If only I could match the list of my scariest things to Julie Andrews singing My Favorite Things from The Sound of Music. Irony: The Sound of Music was about a family fleeing a government that shifted from a constitutional republic, to nationalistic, to being part of a regime so terrible that the world had to go to war to stop it. But it is such a sweet song. I digress. Kids are in costume and searching for candy. Sorry, kids. Can’t find an easy way to hand out that much sugar. Instead, it is a night to turn the lights to low, open the computer, and consider what is really scary. Going to need a cup of tea to type this. You may want something stronger to read it. Hang in there. Knowledge is power, and eventually I’ll get to the good stuff.

Note: Many of these are what I track on one of my other blogs: PretendingNotToPanic.com – news for people who are eager and anxious about the future.

As if climate change isn’t had enough, take a look at the longer list: 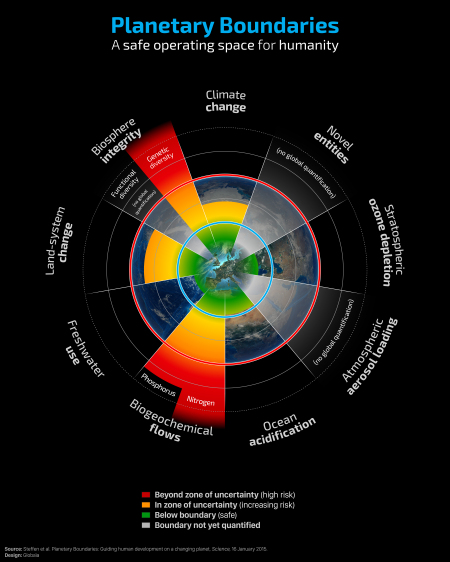 Of the items on that list, climate change is the easiest to describe, but not the greatest threat. Yet, even it is denied. Even without climate change, the land, soil, water, and air needed to grow crops are all under assault.

I’m putting it second. These aren’t in any special order, but I want to get politics out of the way. Governments have always had factions. Governments that suppressed them eventually imploded sharply. Think USSR/CCCP. Governments that institutionalized them eventually fractured. Think Civil War/War Between the States. Those wounds are frequently reopened with “we will never forget”, regional or tribal pride that anchors governments to the troubled past and gets in the way of a positive future. A century ago, such a squabble had to work hard to accidentally stumble into a world war. Today, a tweet kills thousands and displaces a hundred times that within a week. Serving the citizens and respecting the neighbors by following the laws seems to be secondary to power, wealth, and that pride.

Wrongs are being righted, but we’re wading through revelations that cost lives to get there: Hong Kong, France, Indonesia, Peru, Haiti, Lebanon, Syria et al, Israel, Chile; and then the non-nations like the Kurds, Tibetans, over a dozen conflicts in Africa; and then the people who have chosen lifestyles that are counter to convention. The good news is that we’re all more aware of the situations because of the internet; but it also means a veneer has been removed revealing how poorly people can treat people. Whether it is access to safety, or food, or water, or freedom, or equality there’s a battle ongoing to resolve it.

Once upon a time, conservative governments advocated for balanced budgets. Once upon a time, investments were controlled by people instead of machines. Once upon a time working harder helped people get ahead, and if they couldn’t get ahead where they were, they could move to where they had a better chance. Deflation was academic and we developed tools to counter inflation, monopolies, and corruption. Now, too many financial instruments are returning negative rates, wealth and income inequality are increasing, tax avoidance is increasing, and the fundamental basis of trust in currencies is disappearing. But no worries because the economy is booming, or at least the markets, or at least the mega-corps.

Guns and other weapons are too readily available. Disinformation is too easily distributed. It is hard for an army to defend against a scattered group of radical or passionate people who don’t care about anyone else, and don’t have to protect a fortress or a city. Borders are anachronisms that fewer people are paying attention to, except where reactive governments are trying to hold back tides of refugees and ideas. Oddly enough in terms of deaths and life expectancy, terrorism is ineffective (at least so far); but very effective in terms of encouraging nations to bankrupt themselves using old techniques to fight new threats.

Without technology, modern life would be impossible, and billions of people wouldn’t be alive. Whether that has been too much of a good thing or not, at least until about seventy years ago, we knew what we were building and had a good idea of what it would do. There were plenty of unintended consequences, but they were understandable in retrospect. Now, programs we don’t understand are writing programs we can’t understand. Privacy is basically eliminated simply by offering a slice of convenience for giving up fundamental rights. They know who you are, where you are, and can guess what you’ve done, are doing, and will do. But at least you no longer have to remember how to read a map or sign your name, eh? Facial recognition, so innocuous. Oops.

Nature has become synonymous with climate change. Look back a few paragraphs and see it is more than that. And then consider weather, quakes, tsunamis, volcanoes, pandemics, solar storms, and oh yes, rocks falling from the sky. Nature can be sweet, but it can also be nasty – naturally. The world frequently changed dramatically before our species was here to notice. Those causes didn’t go away. They’re just on a different, and somewhat chaotic, schedule. Now, we get to watch the magnetic poles shift without really knowing what that will do to climate and technology and mutations and extinctions.

We’re aware of so much more, and more people are picking their favorite issue to handle.

Fifty years after the first Earth Day, environmentalism has expanded from a few advocates to the basis of corporations that realize that green is good, even profitable. Get rid of the waste, decrease costs, increase profits. People aren’t laughing (as much) at non-animal ‘meats’, electric cars and bicycles, and are drawn to local instead of corporate sources for necessities and luxuries.

People are witnessing the bizarre culture of conventional politics and are rising to make changes by changing the system, running for office, or doing rather than complaining. Upheavals will happen, and may even be encouraged.

“I hold it that a little rebellion now and then is a good thing, and as necessary in the political world as storms in the physical.” – Thomas Jefferson

They still do what, where, and to whom? Balance that against respecting cultural diversity. One person’s injustice is another’s norm. Social media has become a confused and inefficient debate platform; but at least people are talking. OK. They’re shouting, but until recently it was hard to know how extreme some injustices have been, and how non-homogeneous communities can be. Extremists in America? Sure. But someone can confess to a crime and have no repercussions for years, or ever? That is who we are and how our society has run. We’re aware. That’s powerful.

Everyone’s finance in personal, but now we see celebrities being upset about not getting paid an extra million while finally realizing realizing how many people are driven to bankruptcy by, ironically, a health care system with the oath to “do no harm.” Where’s the upside, the good news? Challenges to convention like Bitcoin, the Gig Economy, and DIY are creating avenues for change that weren’t possible a few years ago.

“We have nothing to fear but fear itself.” – Franklin Delano Roosevelt

And that is a powerful weapon. Terrorists wield terror and fear. Terrorists are terrible, but they’re also inefficient. The greatest hope is that they’ll eventually lose their emotional and financial support, which is something that can be accomplished – especially if we quit creating allies for them by over-reacting to their acts.

There are a series of races in progress within technology. Uncontrolled automation can be a threat. Advances in renewable energy, more sustainable products, new materials like graphene, and greater efficiencies may mean that many of the problems above are solvable. That’s what we as a species are good at, identifying problems then identifying solutions and implementing them. That’s how we got here, and now we have over seven billion minds to launch at any task.

Nature trumps all. We’re learning that we have to live with nature, not command it. We are learning humility, which is one of the toughest steps in maturing. Our species is old, but our societies, civilizations, and realizations are young. We are adolescents who found the key to the car, but there’s no owner’s manual, and there never was a repair manual. We might have to learn a lot more then write a few chapters, but we’re capable of that as long as we listen to logic and facts. Hopefully they are coming back into style, just in time.

Kids dressed up as witches and wizards don’t frighten me. We could use a bit of their magic.