Sounds weird, but it is true, and has been for a while. Bonds and mortgages are being sold that have negative interest rates. Ready for that on your credit card? Probably won’t happen, but I’ve been squinting at articles and scratching my head about this twist in personal finance possibilities. One consequence, a reminder to not physically scratch my head while wearing a dark shirt. Pesky dandruff. As if politics and the planet weren’t going through weird enough phases, welcome to yet another bit of weirdness in finance.

So, let’s see. Many mortgage rates in the US are about 3% to 4%, far higher than Denmark, but even lower than the double digit rates the US saw in the early 80s. I wonder how many online mortgage calculators will break because they assume mortgage rates must be positive. I think about negative rates now so my brain doesn’t break if they show up.

Basically, a negative mortgage rate means your remaining debt decreases by more than the principal you pay. For details check out the Guardian’s article or Investopedia or your favorite financial professional. I’m not a financial professional, but I can at least tell you what I think about how it might affect me.

For right now, it won’t affect me directly. I don’t live in Denmark (though I would like to bicycle through the countryside.) It might indicate, however, that mortgage rates have downward pressure as well as upwards pressure. They’ve risen into double digits in the past. Can they fall by double digits in the future? Can they? Academically, possibly, I guess. But we at least have proof that in some countries they’ve already gone negative. 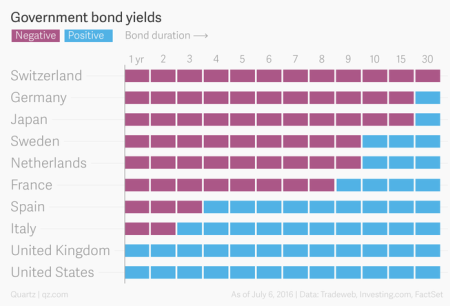 Mortgage rates aren’t the only interest rates that have gone negative. About three years ago I posted a series of instances where national central banks were already imposing negative rates on major lenders and depositors. The negative mortgage rates are possibly tapping into those financial instruments, allowing this mind-twisting scenario.

While some argue about wealth inequality and the rights for some to optimize tax havens, some governments have been noticing a tendency for assets to accumulate rather than circulate. As money piles up, there’s less money to move around. The economy relies on money moving between people. That’s how people earn and spend to make their lives livable, not just in luxuries, but in necessities as well. The current economy encourages accumulation. The more you have, the more you can get, which means you can have more. Those who play the game the best end up with the most, leaving less for everyone else. Wealth taxes can be difficult for politicians to pass, but interest rates can be set by bankers who may have some autonomy. Impose a negative savings interest rate and putting money in the bank comes at a cost. Better to move it than lose it, so goes the thought. 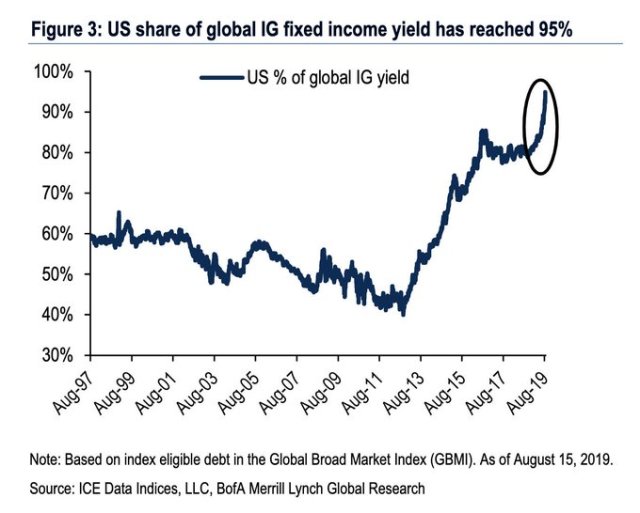 There’s so much concern about where to buy into fixed income financing that over 90% of such debt is being managed in America, where rates have yet to go negative.

A second response can be fear. Despite a reputation for finances to be run by mathematics and logic, fear and greed continue to rule. Where do you want to put your money for the long term? Cash under the mattress, or the equivalent, holds its value if inflation doesn’t exist – but mattresses, or their equivalent, can burn. Various assets can hopefully appreciate, but investing is based on some risk, which means there are no guarantees. Layer enough negative options and some investors and depositors are willing to make sure they only lose a little rather than a lot.

Corporations historically spent discretionary case on research and development, but megalithic companies seem more secure buying back stock than inventing new products that will compete against their existing money makers. As they become monopolies, there’s less pressure to compete; so, why spend when your money can make money?

Other assets aren’t as attractive. Despite political posturing, investing in oil and gas and coal is being challenged by those who want to invest in solar and wind. Oil prices are back down below $60/barrel. As solar and wind become more popular, the economy of scale drives down their prices making them more competitive; while the fixed costs of oil, gas, and coal are spread over fewer customers raising their prices and making them less competitive. It was easy to invest in physical commodities like a tanker of any of those things, but there is no tanker of solar or wind. (Except batteries, but that’s a digression too intriguing to follow, now.)

This may be one reason for the flight to real estate. Certain hot markets are attracting buyers of ghost houses, houses that are bought to appreciate. Renting them can generate income, but that income comes at a risk. Renters might damage a property, even accidentally. Also, selling the property is quicker if it’s vacant. Hence, housing shortages for those who actually want to live in a house.

It may also be why gold is reaching new highs.

There are two long term worries that seem unlikely, but then so did the Great Recession and now negative interest rates: currency (in)stability and deflation.

Currency (in)stability may be why Bitcoin refuses to collapse. Bitcoin and other cryptocurrencies are gaining acceptance. To some they are appealing precisely because they aren’t tied to a country, its politicians, or its banks. If currencies were to lose credibility and hence some value, it can be a reason to be satisfied with a small definable loss. This takes some more pondering, but currency collapses are common throughout history. When people fundamentally lose trust in government, currencies lose their value. (Though then, wouldn’t a negative interest rate be paid in a shrinking currency? More dandruff material.)

Deflation is a big worry. If it was tough to get people to spend money in today’s economy, imagine how much more difficult it would be in a deflationary economy. Why buy today when you can get it cheaper tomorrow? I see this almost daily as people try to guess about the real estate trends, holding off on a purchase because they’re hoping for a fall like we saw in the Great Recession. Maybe they’re right. Maybe while waiting for a 25% drop there will be a 40% rise. Take that to a global scale and imposing negative interest and savings rates on accumulated wealth seems like a relatively benign method.

Professionally, negative interest rates will make my job as a real estate broker very educational. I’ve frequently held jobs in dramatically shifting environments. At least I know how I deal with change. Learn. Learn. Learn. Adapt. Adapt. Adapt. Of course, people who buy or sell because they know what they want to do with their lives can get on with those lives sooner than those who are waiting for the right market moment.

Personally, I don’t expect any immediate change. I doubt my mortgage servicer is going to give up a forty-year commitment, even at a relatively low cap of 4%. Of course, I’d be more likely to refinance, but that will be a while. That will be a while partly because I need to pay down a credit card that is charging over 15%. That’s temporary. Pay that down, get back to a good credit score (oh, 824, I knew you so well – until my mortgage issues), and then see what’s happened to credit card companies that have to deal with dramatically lower long-term rates from the competition (not just sweet introductory offers.)

Negative interest and savings rates aren’t aimed at me. I’m not rich enough. I’m not hoarding cash. Definitely am not hoarding cash. If negative rates gain greater acceptance, the fundamental shifts may be in the corporations and coffers and havens that have been out of reach of courts. If that releases money to flow back into the real economy, that may be a very welcome and pervasive consequence that’s more important than my mortgage or credit card rates. Negative rates may not be aimed at me, but I may benefit from them – even if they don’t change my bills.

(Disclosure: I am a licensed real estate broker (with Coldwell Banker Tara Properties on Whidbey Island.)