Trade wars. For many people they are abstract news items, reasons to cheer or complain. They’re real, and sail past my house and cruise through my portfolio. Global news can affect personal finances, even if isn’t your job that’s affected. What to do? I’m pondering that.

My little house looks out across Puget Sound to the Olympic Mountains. Nice. I like it. That also means it looks my view includes the shipping lanes that lead to the harbors of Seattle, Tacoma, and Everett. It is more like an interstate than a backroad, but instead of long-haul trucks the traffic is dominated by container ships. Container ships work best when their holds and decks are full. Since the trade wars began, the ships are floating a bit higher as they leave the US and head to Asia. 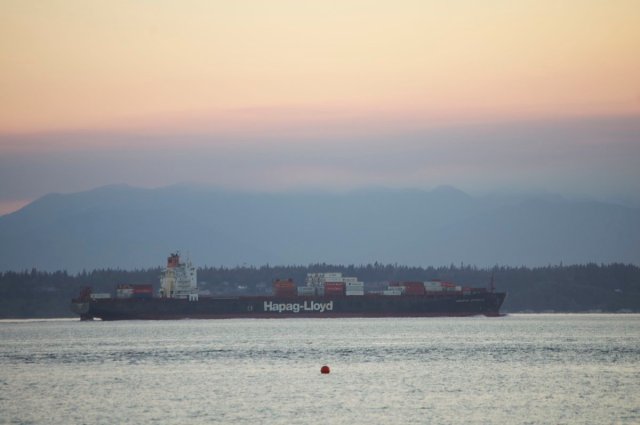 Maybe they were going to add more containers somewhere else along the way. I doubt it.

One weird result from similar trade imbalances created unexpected opportunities in other regions. Lots of containers coming in with few going out means lots of containers piling up. The price of the excess containers goes down. Resourceful people buy them up. Hello, affordable housing. But, I digress. (If you want more about innovative housing on Whidbey Island check out my post on one of my other blogs, AboutWhidbey.com).

Watching the fairly empty ships burn fuel to cross the ocean has a direct effect, but only emotionally. Indirectly, it hurts the economy and the environment; but those effects admittedly aren’t perceptible in my life. For others, the effects are direct.

And then came yet another mis-informed tweet about tariffs, as if they somehow make money rather than penalizing people. I try to steer clear of politics because it is too easy to get too distracted. But, tweets from the last few days imploded one of the stocks I was considering selling to pay some bills.

NPTN, the stock for Neophotonics, dropped as much as 44%. They have business relationships with Chinese businesses, and investors ran away from the risk. Assuming everything eventually comes back to normal, a 44% drop is a buying opportunity and a lousy situation from which to sell. The direct effect for me may be a greater reliance on my credit card for some truck maintenance. The indirect effect may be greater because Neophotonics builds the switches that helps the internet stream without buffering.

This is an echo, for me.

AMSC’s fall is part of my Triple Whammy that I’ve mentioned before. About eight years ago, one of AMSC’s prime customers decided to become a competitor – using AMSC’s technology without permission. Hundreds of millions of dollars of revenue vanished. The stock dropped from over $70 to under $4, and stayed there for years. It’s only within the last year or two that it has climbed back up to over $10. It’s fall wasn’t the result of a trade war, but the pursuit of justice was curtailed by diplomatic concerns over trade policies. Why upset an economy the size of China’s over damages measured in less than a billion?

Now, my concern extends to MicroVision (MVIS). They, too, are heavily dependent on Asia and China for customers and producers. The MVIS stockholders’ meeting is Wednesday. There’s been too little news to prop up the promises, pardon me, ‘forward-looking statements’, from previous calls and meetings. I wonder if there’s yet another event that will impact their projections (pardon the pun, fellow shareholders.)

We live in a connected world. We are interdependent as a species and as a series of economies. Personal finance requires at least some awareness of the impersonal influences that are beyond our control. Predicting those influences isn’t easy. If it was, all economists and investors would act in unison prior to politicians making proclamations.

In the short term, international trade disruptions mean shifting my personal choices about which stocks to sell. With enough cash, it would also mean possibilities of pursuing opportunities. I won’t say I am happy about the situation, but the situation is a good example of the value of a diverse portfolio and a frugal lifestyle.

Let’s just hope my truck gets me to the MVIS ASM without requiring me to sell some AMSC while waiting for NPTN to recover.