How old are you? Do you remember when stores were built around the idea of nickles and dimes, or is being nickled and dimed something that sounds dealing with insignificant details? Change the wording from pennies to dollars and the story hasn’t changed much.

I remember five and ten cent stores, both local stores whose names I forgot and national names like Woolworth’s that are mainly remembered as historical references. With a pocket of change a person could go shopping for enough stuff to warrant a bag (paper, of course.) It was a time of save a few pennies and work up to a nickle, and actually get something for it. Leave a nickle as a tip now; and find you delivered an insult.

The modern equivalent is the dollar store. Very much the same idea, but my imperfect memories remember stores that were nicer than the Dollar Store. They also seemed to be much bigger, but I was much smaller. Perspective matters. The name represents a ten or twenty multiple, but the basis was the same: they buy in bulk from a cheap manufacturer (first Japan, then China, then…), we buy a few items knowing we’re paying based on price, not quality. If that’s all you can afford, then price becomes more important. Even if quality provides lower costs over all, that’s a luxury to someone who only has that dollar.

One lesson is inflation. As much as we can fear or complain about inflation, inflation is relatively calm in recent US history. We worry about inflation exceeding a few percent. Americans who were adults forty years ago lived through a short period of 13% inflation. A dollar in 2019 buys as much as $0.07 did a hundred years ago. We use cents so infrequently that the symbol is no longer standard on a keyboard. (Feel free to play with the notion that “We use sense so infrequently…”, but that’s another story.) The US currently has 1.9% inflation, which is below the Fed target of 2%-2.5%. 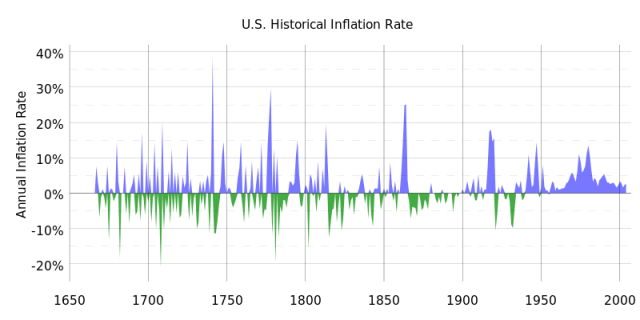 A little inflation is seen as a good thing because a little deflation is a very bad thing. A couple of percent keeps us on the less unhealthy side of a major economic worry. Check Japan’s worries about deflation (and their potential for a deflationary spiral) or Zimbabwe’s worries about hyper-inflation (which is so ridiculous that it was aiming at 1,000,000% recently.)

Saving those pennies made sense when they could accumulate to something. They still can, but one measure of how little we value them is how readily some shoppers leave their change at the counter, or dump nickels and dimes and maybe quarters into the save-a-penny/take-a-penny cup. At least some non-profits benefit from valuing the multitude of discarded coins donated to them at the cash register (that’s assuming there’s any real cash to register as more transactions slide over to plastic or an app on a phone.)

I’m not one of those people who say everyone should count every cent. My bank accounts must balance to that measure, but I’m not going to spend that much time worrying about such small amounts of money. I do save my change, and rarely spend it; but it rarely amounts to much. About two or three times a year I collect all of my change, load it into a rattling retail coin counter (Yay for not having to fill little paper tubes and smelling like copper!), and find that the total amounts to less than a tank of gas. Hit the Donate button, get the receipt, and it doesn’t even make a difference to my taxes. Hopefully it makes a difference to the charity. I don’t do it for me because I’ve quantified how little it adds up to relative to my expenses.

Money is value. Time is more valuable than money. Don’t spend too much of the precious resource trying to save more of the other one. Time is more than money. Decide for yourself where that line is. Don’t worry about whether it makes sense for Bill Gates to take the time to pick up a $100 bill. What will you walk past? A penny? A nickle? A dime? A quarter? A dollar bill? If all you have is $1, then pick it all up. I’ll stop to pick up any of it because of the Lucky Penny superstition, and the possibility that anything higher may be claimed by who dropped it. In reality, a Lucky Penny sits on the shelf for a while before getting dropped in to the coin sorter. The other coins sit on display a shorter time, even though they all end up in the same place.

The more practical application of the nickle and dime concept is electronic. The value of a dollar is more apparent when you have to pull one out of your wallet for every purchase. Go online. Sign up for a subscription that is ‘only’ a few dollars a month. It may be worth more than that, in which case you made a deal. But it is too easy to sign up for several subscriptions, and to sign up for more than you can remember. Debit and credit charges can drain accounts without involving wallets or checkbooks. It is true in personal finance. It is true for businesses. My streaming device readily tries to entice me with subscriptions throughout the day. Most of them have a price of a few dollars a month. Sure, they all have value. But I can only enjoy one at a time, and may not be able to get to all of them in a month. One at a time. One at a time. I turned off Netflix, switched to Hulu, and may try another one soon.

The more important and powerful but boring adage is “A penny saved is a penny earned.” Being creative and resourceful enough to realize you don’t have to buy this thing or that service is much more powerful than saving 20% or even 50%. Don’t buy it and save 100%; assuming that was for a want, not a need. Necessities are more valuable than luxuries regardless of the luxury or its price.

Now, I am curious. I wonder what a pack of gum costs. I rarely chew it, so I don’t know; but I do know it isn’t a nickle or a dime, and may be more than a dollar. Sounds like an excuse to visit the store, check some prices, and save all of the money I won’t spend on such things. Of course if there’s a sale on tea, well, that’s another story…