If Only The Money Was There

I got my hair cut today. I’d show it off, but Google auto-updated my Chromebook in a way that disabled the camera (something we now assume should be part of a normal computer.) Trust me. Diana at Chops did a fine job steering my image towards respectability in time for my affordability and real estate presentation 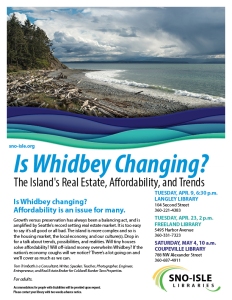 next week at Langley Library. I’d just come from a talk with writers and entrepreneurs, where looking scruffy is acceptable. In those two conversations and a few others in the last week the same refrain was heard; “If only the money was there.”

The money is there. That’s the issue. For each of those conversations the money was there, not here. There’s enough money out there; but out there doesn’t move businesses, projects, and ideas here – wherever here may be.

This is a story that includes the poor and the rich, two four letter words that overly simplify the world because every issue is about individuals, but simplifications must be made to make conversations happen.

Whidbey Island is not alone. Plenty of people are trying to pay their bills by starting businesses.

Services are common because their expenses are low, at least compared to goods that require materials, tools, labor, storage, shipping, and maybe handling returns. The profits and the profit margins from services are high, too. Potentially. Goods, however, especially goods that can be mass-produced, can scale wonderfully. Patent an idea, get someone else to make lots of whatever it is, and enjoy royalties without further work. (See AlanBeckley.com for one friend’s success story.)

Ideally, starting a business is a very American idea. The majority of wealthy people got their money from inheritances or working in finance; but many of the minority built their wealth by working. They succeeded in clearing the realistic hurdle that blocks many idealistic plans.

Getting a business started isn’t easy. It takes money to make money and the poor don’t have money, by definition. It is possible to build up from only a few hundred dollars, but those stories seem about as common as hearing about lottery ticket winners. The next most logical step is to borrow money. The rich have money, by definition, and many will make it available at a price. So, one way to become less poor is to make someone else more rich. Granted, that price reflects the potential losses from failed loans, and that price doesn’t always cover those losses.

As a consultant, one of the most common conversations I have is how someone is going to fund their idea. Now, here I have to show some discretion because appearances are important and I don’t want to reveal the reality behind confident facades. But then, I suspect we all know people wearing a bold front that’s propped up by hope, faith, or debt. That facade may be worn far past the establishment of the business because sole-proprietorships are fragile and not protected like corporations. Their owners know how easy it is to fall back down there.

The island is a good place to see the process in action. Anonymity is harder to maintain. Storefronts opening and closing are associated with people instead of businesses. If a store opens, folks know who is running it. If it closes, we lament the loss for the person more than the loss of the business. Conventional wisdom claims that the main reason young businesses don’t survive is because they didn’t have enough money at the start. They were under-capitalized, just as the poor are under-funded.

The same is true with advocacies and non-profits. Great ideas, but insufficient funds for the work that needs to be done.

One of the topics that may come up at next week’s real estate talk is similar. Affordability is directly a function of assets, debts, income, and expenses. Finding safe, clean, and sustainable housing is much easier with more money. A home means a more stable life, a chance to become part of a non-transient community, and legitimacy. With a fixed address a person can be more reliable, more likely to get a job, more likely to be healthier and have lower health care costs, and potentially have lower stress levels. Without the house, there may not be the job, there may be a wide variety of health issues, and there’s less money available for prevention or treatment.

So, it sounds simple. Get people into houses, any kind of houses. There are several people and organizations working to help, but the very fact that housing is expensive means the solution requires money. The money, and to some extent the houses, are there; but it’s not where it is needed.

Thanks to crowdsourcing and social media, there are probably more sources of funds that ever. Whidbey Island is also populated with charitable people.

“On an island with fewer than 100,000 people, there are over 264 charitable organizations listed with the IRS.” – AboutWhidbey.com

Each source has its own set of rules, guidelines, goals, procedures, and limitations. To some extent, they exist because the traditional source of borrowing money from a bank is less popular than before. Banks are more cautious because of recent losses. Faith in banks has also diminished for several reasons, including scandals like the one at Wells Fargo, and personal experiences during the foreclosure crisis. I can’t compare to the situation before the Great Recession (the Second Great Depression), but I do know many people who have an aversion to being beholden to a bank, or any debt. If they can’t buy it for cash, they won’t buy it; and that includes houses.

“Wealth inequality continues. Now, 0.7% of the people control 46% of the wealth.” – Pretending Not To Panic

That 46% of the wealth could do a lot more work, but much of it is held in financial instruments like stocks. Billionaires rarely make billions from paychecks. Billionaires are created by stock appreciation. As wealth inequality grows, more money flows out of the economy and into tax havens. The rich get richer and the poor have less available to help them become less poor – unless they borrow from the rich making the rich richer.

I’m one of the lucky ones. I live in a supportive community, and have received generosity beyond what I imagined. I’m in a much better situation than I was even two years ago. And yet, a few months of delayed projects and compensations could mean I’d have to sell my house and move – somewhere more affordable. I doubt that will happen, but I notice it and then look around at how many others are in less comfortable situations.

A few decades ago and relative to today, banks were seen as a source of affordable funds, government provided more services, social mobility was greater, wealth and income inequality was much lower. From what I witness, the new sources don’t compensate for the loss of the old supports. If you find that “It should be easier” you’re probably right. But, until something changes, this is the new normal – and be thankful for those who decide that generosity isn’t measured by profit and loss.