The mysterious box is opened. The kettle is warming up, heading to “A full rolling boil”. A friendly tea provider has been consulted. A typo has been found. Just another episode in my not-so-boring life. Thanks, Twitter, I guess. And thanks, Rakkasan Tea Company for a pleasant and probably aromatic surprise.

Ah, I hear the water boiling.

Put my nose in the rising mist as I pour the hot water onto the leaves and into a tea pot for steeping. So, there’s the aroma. It wasn’t as pronounced when I opened the tin.

Tea poured, most of which goes into a thermos for tomorrow because it is too late in the day to drink too much tea – if I want to sleep.

And, before I take a sip, notice an email from a client in Japan. (Real estate, it’s not constrained by time, time zones, or continents. So glad to be able to work electronically; but I digress.)

At least this means the tea isn’t scalding when I finally take a sip. Ah. Nice. Definitely a good mid-morning to mid-afternoon tea.

How did this all happen? I don’t know, but I can guess.

When I got home from work I was surprised to find a cardboard cube of a box in the mailbox. It barely fit, just right. I hadn’t ordered anything, but my neighbors do. Just last week, one of their packages ended up in my box. No problem. Check the label and hand the package to them. But, just like the surprise gift from Lands End, there was my name, correctly spelled to the correct address on the label. A very nice departure from bills and election rhetoric. Check the return address. Rakkasan Tea Company. Never heard of them. While most folks would Google it, (there’s that noun becoming a verb) I have better sources. Five, yes, at least five of my friends have owned tea shops or sell high-end tea. Maybe one of them know about the company and can tell me what’s happening.

“a Natural Apothecary since 1996“. Go check out their site, or even better, visit the store that has now become a bit of a tourist attraction for its selection, ambiance, expertise, and personalities. OK, folks. Ever heard of Rakkasan Tea Company? Nope. And yet, it’s just the sort of tea that Dandelion would sell. Rakkasan is a young company (2017) that will “import solely from carefully selected estates in post-conflict countries as a way to promote peace and economic growth“. Sounds good. I might have to share a bit with Brian and Kachi, as well as some of my more local tea aficionados. (Though, it may be cheaper to ship them some. The gas mileage of my pickup is not exactly eco-friendly.)

The gift, which I’m assuming is a gift because there was no receipt or note, is nicely packaged: a good tight tin that holds about two ounces of tea and could probably hold more. Black Jasmine, which as they point out “is traditionally made with green tea” is therefore distinctive. 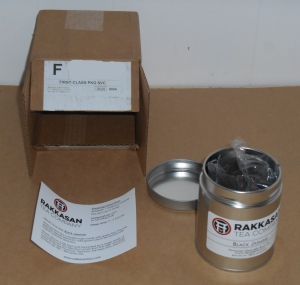 The greater distinction is the company, the possible reason I received the tea, and the fascinating collision of coincidences this day has produced.

Skip past organic. This tea is: harvested by a single family, from 300-400 year old wild trees, is ethically and sustainably produced, and sold by U.S. Army veterans who want to promote peace in post-conflict countries. That’s a lot to keep track of.

By the way, this tea is so drinkable that I’m halfway through the cup that I said I wouldn’t finish this late in the day I guess I’ll be up late watching a movie or something.

Here’s how the business world works now. U.S. Army vets, selling Vietnamese tea, under a Japanese name, with a Japanese Torii gate for an icon

(and trust me I noticed the Japanese theme today, particularly getting to work with my real estate clients), all from a company that’s based in Texas. Blended teas are common, but this is a cultural blend, too.

Here’s how the electronic world works now. I use social media. I’ve been using Facebook for almost a decade. (I’d check but Facebook is so slow now that I only visit occasionally, or from a faster computer.) I spend more time on Twitter (@tetrimbath), with some time on LinkedIn (Thomas Trimbath), and Tumblr. (Bye bye, Google+.) In the midst of my posts about personal finance, real estate, community, and news that has me “Pretending Not To Panic”, I also post the same sort of innocuous comments that more real people do.

Just for fun, I started posting about the teas I was drinking. A tough morning? Something stout to power through, like one of the breakfast teas that mix Assam and Keemun. A tough afternoon? Probably something herbal, maybe with chamomile if I’ve been wound up too long. Green fits nicely into an afternoon, though I wouldn’t want a thermos of it. And then there are those herbal infusions (but we call them teas, anyways) that were inspired by Brian and Kachi’s blends. My typical blend is nettles (provided a friend whose property has more than enough), lemon balm (from my front yard), lavender (from my yard), mint (from my yard and some from Dandelion Botanical), and honeybush (from Dandelion). Thanks to too much time working in the steel mill to get through college I don’t have the refined taste buds of other friends who operate tea businesses, like Dori Hallberg

; but I enjoy a variety. So, I share little notes about my cups of tea often enough that someone suggested a hashtag, #TomTea.

I don’t know, but I realize it is possible, that Rakkasan stumbled across my tea posts, and decided to subtly introduce themselves to me through tea. That’s my story, for now.

The world no longer works from conventional business models or communication channels. Klout.com, which just went out of business, tried disrupting Google the way Google disrupted Yahoo the way Yahoo disrupted newspaper ads. Ads are pushed and broadcast and spread across populations, hoping to find enough sales. Yahoo collected the market niches into categories that made it easier to target. Google found a way to target people who searched for a term rather than joined a group. Klout tried what’s called the Reputation Economy, where it’s cheaper to contact certain individuals hoping to encourage them to spread the word. Rakkasan sent me a tin of tea. Tea = $17.99. Shipping probably < $10. Labor cost for noticing the tweet and deciding to send me something = I don’t know. But, I do know that $100 doesn’t buy much of an ad in the paper; and that only runs once. Advertising is always a risk, and depending on how many and which people they contact, the reward could be far greater. 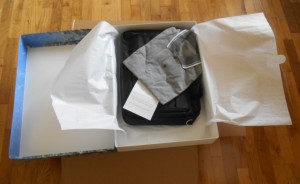 Look back a few weeks to the package I received from Lands End. Since then, I blogged about it, tweeted about it, told dozens of my friends the story, and equally importantly I’ve returned to their site to line up my next purchase. (For every successful real estate transaction I tend to buy one or two more pieces for my aging and fading wardrobe. A necessary and welcome treat.) I’ll tell this story, too. And I won’t be surprised to find that I got it wrong, which will prolong our conversation. Maybe that’s why they didn’t send me a note: suspense.

Rather than caffeinate myself into insomnia, I’m nibbling on another appropriate synchronicity. These zucchini slices may not be cucumber slices, a traditional tea accompaniment, but they’ll suffice to make me grin with the way so many things came together, today.

Thanks to Rakkasan Tea Company, I’ll try to tag them on Twitter and Linkedin. (They’re welcome to tag me or Trimbath Creative Enterprises.) Thanks for the story. Now, I just have to figure out the best way to point out a typo on their tin. See, that’s what happens when a writer gets involved.