Small towns rejoice! The data are in. Living in a small town correlates well with happiness. The farther someone is from a city, the happier they tend to be.
Cities rejoice! The data are in. Living in a city makes it easier to make money. The closer someone is to a city center, the easier it is to find a good job at good wages.
Suburbs can rejoice because they have a bit of the best of both, and can mourn because they have a bit of the worst of both.
If you want data, you’re welcome to start with my post on PretendingNotToPanic.com and follow the links. (Which some have done and reached their own conclusions.)
This post is here to skip the data. I gripe about my economic life being tough, but I can pass along an anecdote or two that make me glad I moved to a small town. 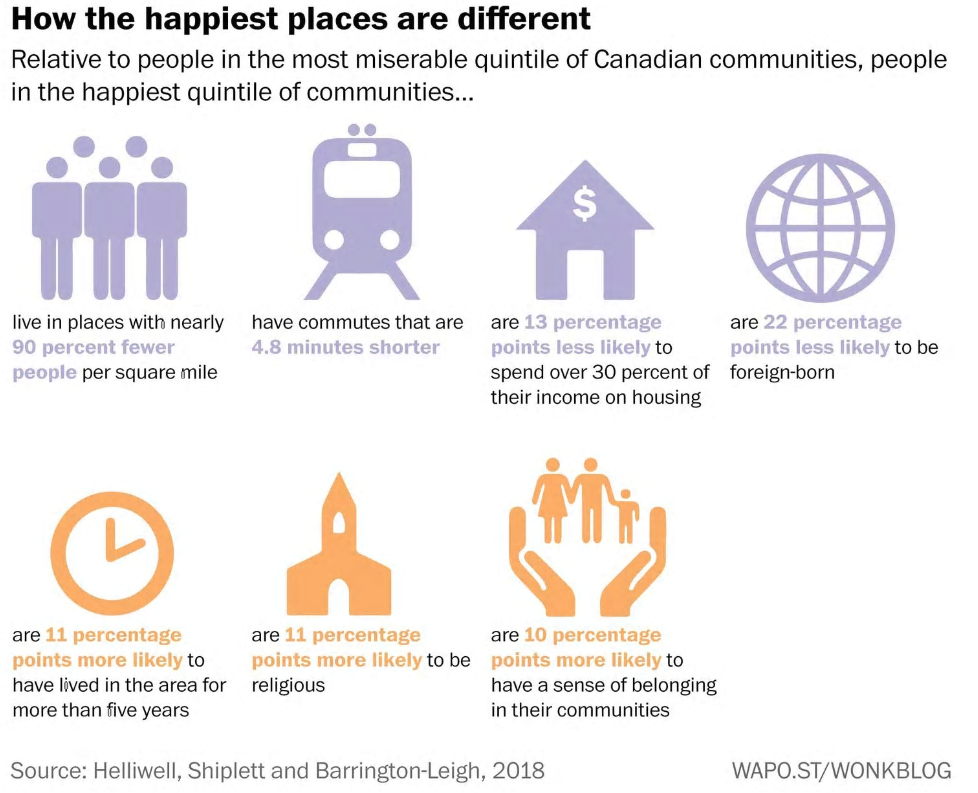 Everything is relative.
I live on Whidbey Island, a long island with its southern tip a little less than a 30 mile crow-flight, plane ride, or boat ride from Seattle. That’s close. But, it is also far enough away and un-urban enough that some Seattle-ites couldn’t find it on a map. I know people in Seattle who are proud that they’ve never traveled to the other cities in their county. Whidbey? That’s the wilderness to them.
I live on the south part of Whidbey Island, a place known world-wide for its tourist destination town of Langley, a place that considers itself a city when it comes to naming their building city hall, but brands itself as the Village by the Sea for the tourists.

I live in Clinton, a place that is unincorporated, is a census-designated place, that is best known for the ferry terminal that leads to the mainland. Clinton is known for being a drive-through, a place along the “highway” (really a state route), the connects the southern ferry to the rest of the island. (Check out the Rural Characters having fun with Clinton.)
I may have a Clinton address, but I live so far south on the island that people who’ve lived here for decades don’t drive here on purpose. We aren’t on the way to anything, anything except peace and quiet for most of the year. Summer is a different story. My house is part of a small neighborhood that looks suburban, but it is a bit of suburbia with shoreline, views of the Olympic Mountains, easy access to the Puget Sound and the rest of the world’s oceans (for those intrepid souls), and even a marina. We may be closer to Seattle than the rest of the island, but we’re part of another world.

For over 20 years I lived in various urban and suburban parts of Seattle’s metropolis. Each had its virtues. Each made fun of some other part of the area. There were more than enough people, more than enough things to do, enough jobs that meant I frequently had to move, and more than I could see, visit, or do in a lifetime. Seattle is not a dull place. (Flashback irony: One reason Boeing said that hired me was because they had a tough time attracting young people in 1980. The city was seen as too quiet, too dull, and too wet. So much for that image.)

It was only after I moved off the mainland that I learned what my life and world lacked: community.

It isn’t that I didn’t have community. I did. I had a wide range of friends, people that Facebook helps me keep track of. We did a lot together. I didn’t realize, however, how much anonymity I had.

Within a year of moving to the island I ran into the fish bowl effect that small towns are known for. I moved to the center of the fish bowl, Langley. Yes, Langley is a tourist town, but it has residents, otherwise it wouldn’t be a town, or city, or village, or whatever. I was newly single. A single guy in his forties who was retired, active, had parties, liked to dance and cook, and was a writer – well, word got around. Word got around so much that if someone parked a car somewhere near my house overnight, I’d hear stories the next day about who I was with – even if it was just a parked car owned by a stranger visiting someone else. The rumor mill was active, and that’s an understatement.

The gossip was also common enough that it was a worry for the mayor. He sat me down to talk about it. Okay. He sat me down to cut my hair because he was my barber, but he was also the mayor. He asked me what I thought he should do about it. The city’s culture mattered to him and he saw it as detrimental. I agreed, and told him to leave it be. I’d just been through a divorce and retired early because of stress-related health issues (and because I had enough money). While living on the mainland, my immediate circle of friends and family knew some of what was going on, but most of it was hidden. We lived in different neighborhoods, worked and shopped in different places, and had other friends who weren’t part of the circle, the network. When it came to emotional support I had what my counselor (the mental health kind) called “a very thin support network.” They were people who cared, but they also had to care about a lot of other things, too. Within my neighborhood only one neighbor took the time to listen.

On the island, it isn’t true that everyone knows everyone, but if they don’t know you they know someone who does. They gossiped because they cared. If they knew what was going on, they’d cheer or sympathize as appropriate. Gossip happened when they cared but hadn’t heard enough of what was really happening. It was the other end of the spectrum, and could benefit from some moderation (especially those folks who purposely spread hurtful rumors because they thought it was fun). Its benefit, though, far outweighed its cost, usually. I’ve never seen so many instances of spontaneous generosity for people in trouble. They don’t help everyone, no person and no community can, but they don’t wait for the mayor or the preacher to gather and point them towards helping someone. In the best cases (usually in the worst circumstances) help can arrive before someone gets home from an accident or the hospital.

In the city, anonymity is the norm. Want to be rude? You’ll probably never see that person again. Go on a never-ending series of overnight stands? Same thing. Be polite? That’s great, but what goes around takes a lot longer to come around.

In a small town, everyone knows your name, or maybe your face, or they’ve heard of you, or at least you have something in common. Want to be rude? People do, but those are the people who have to avoid people. Want to date around? That’s natural, but there are few secrets. Be polite? Be polite. Be helpful. The local paper regularly runs their Hometown Hero section where someone is profiled for decades of simply being themself in extraordinary ways. Will there be massively inaccurate gossip? Of course. And that’s true for everyone, and everyone knows it. Just don’t expect juicy and wrong gossip to die quickly. There’s not as much to do as in the big city, and a good story can be worth a lot of social capital.

It is an interesting environment to live in. Imagine getting stopped in the grocery store (yes, they weren’t all replaced by supermarkets) by someone with congratulations or condolences. They heard the story, recognized a face, and may have offer a handshake or a hug.

I moved to this neighborhood in Clinton to enjoy the view and the quiet, but also to distance myself from the fish bowl of Langley. Enough can be enough, eh? I make fun of Langley. It’s a tourist town that is proud of itself; but it also may have the best example of community. From Langley Library to Good Cheer Thrift is about a 4 minute walk, according to Google. It can take two hours in reality. Traffic is not the issue, except that it is. Traffic in terms of meeting friends, dropping into shops, enjoying the gardens, and generally moving at an islander’s pace. Within a block or two, nothing may happen; or, folks may want to know about a dance, or have an idea for a business, of have a cause that needs support, or generally are just being friendly. Want a reason to rejoice? There’s one.

Now, excuse me as I skip editing this post. It has been a long day (real estate gets busy this time of year, evidently) and I have a party to prepare. It will be my first in years, and I’m looking forward to celebrating a bit of financial relief thanks to friends, clients, and my perpetually extended exercise in frugality. Step one, clear some room in the fridge. Party fixings are coming in. Oh well, I guess someone has to finish this box of wine. Can’t have my friends drinking the dregs. Cheers!