Hello, clients. Pardon me as I take a break to type during a busy work day in the Gig Economy. There’s plenty of work to do, but the Sun and the horizon are closing on each other, it has been a long day, and somehow dinner is going to happen. Frozen pizzas or nachos are answers, but I like to cook from scratch. Making a pizza crust is going to take too long. Making chips from tortillas would take longer. Decades of experimentation (and a tolerance for culinary excursions) has brought me back around to basics done simply and well – or at least well enough. It is an approach frugal folks recognize; respect time, money, priorities, and basic necessities and pleasures. The approach applies to tonight’s dinner, but it also applies to the work that led to it.

I am not a chef. I was brought up on truck stop food because my Dad drove trucks (and eventually managed the operation), and packaged foods because my Mom was the daughter of immigrants and it seemed that labels and brands were American. In their quick defense, my Dad was also a fan of fresh fruit farm stands before they were popular, and my Mom innovated with cheap cuts of meat in ways I thought were sophisticated. Still, I can be more comfortable around a buffet than ordering from waiters with their priceless menus.

I am a cook, and I enjoy it. My Mom started me with simple recipes, steered me towards cookbooks that relied on Cream of Mushroom soup, and showed me how far she could go with Rice Krispies, Heinz ketchup (and it had to Heinz because we lived just outside Pittsburgh), and bacon grease – not all together. Now, my meals are far from what she cooked (fresh veggies!) and more likely to fit my lifestyle. She had to make our breakfast, prepare jello molds for bridge club and the women’s club, then come home to cook for the two of them, plus three boys, feed us all, then watch my Dad head off to his second job. My dinner table requires far fewer seats, and only has to accommodate one set of tastes (but probably with more dietary restrictions than my entire family.)

I am surprised that more college students don’t learn to cook when they leave home. It is understandable that life in the dorms can also mean prepared meals in the dining hall; but eventually, moving off campus (or getting kicked off, but that’s another story) on a limited budget meant the steepest learning curve of my collegiate career. The first meal couldn’t wait days or weeks. Maybe it was a pizza delivered by another student. I can’t recall. But, I do remember that, of the three of us, the one who labeled himself a gourmet chef only liked to cook one meal a week, my other roommate had a mother who supplied us with groceries which were appreciated and fulfilled his obligation, which left me standing in the kitchen trying to decipher the Betty Crocker Cookbook. Yes. Smoke alarms are exercised by bachelor cooks.

After college, the Joy of Cooking began educating me. Cooking was cheap entertainment, and I entertained myself enough to gain twenty or thirty pounds. More sophisticated cookbooks were distractions that didn’t lead to how I wanted to live. Then, the Food Network came through the cable and I began to learn from Alton Brown. His show, Good Eats, focused on the basics. Why stock makes food taste richer, and how to make stock at home. Why the same energy delivered slow and low cooks differently than fast and hot, and when to use each. One of his themes resonated with my Mom’s cooking and my Dad’s appreciation of it. Recipes that others have turned into sophisticated procedures and elegant presentations frequently started as ways to use cheap ingredients to feed exhausted workers. Roasts, casseroles, and stews didn’t rely on the best ingredients. They relied on slow and low to break down tough tissues and to blend flavors. Fast and hot had their place with quick meals that were enabled by slicing ingredients into smaller or thinner pieces. Hello, stir fry and minute steaks.

Those meals were built around the Industrial Revolution, the nuclear family, and the Baby Boom. My meals are built around the Gig Economy, cooking for myself, and saving the inevitable leftovers. Maybe my college grades would’ve been better if I was able to spend more time studying and less time cooking.

Then, there was one extra lesson I learned that made my life easier, and just as tasty. Make the recipes match my life, rather than making time in my life for recipes. 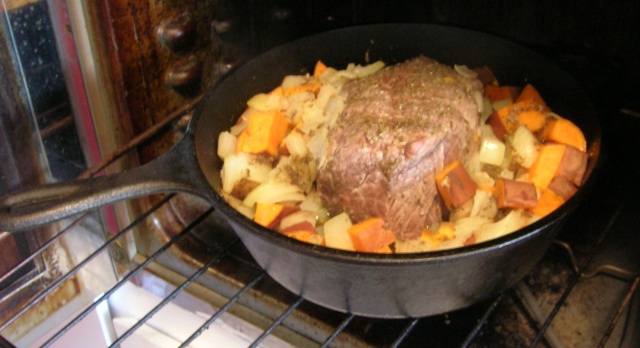 Photo from an earlier dinner

Read most recipes and they do what they are supposed to do: tell the cook how to gather ingredients, measure, season, prepare, cook, tend as necessary, wait for the timer, portion, plate, present, and eat. It looks like clockwork, and can intimidate those who believe perfectly following the recipe is the only way to succeed at making a meal.

Thanks for the suggestions. Welcome to reality.

Cooking frozen foods. I’m not talking about frozen dinners. I’m talking about ice-hard chunks of meats and vegetables. Sure, thawing them properly is preferred. But, many meals work out fine if cooked a lot slower and a little cooler. Tonight’s dinner is a frozen chunk of chuck steak surrounded by frozen veggies with a huge carrot broken into thirds. Drop it all into a roasting pan, season with whatever seems reasonable, cover, set in the oven at something over 250F and under 300F, and let it cook as I type. The aroma will tell me when it is done. One extra hour is usually enough. No need for a timer (though I set one anyway, just in case.)

Cooking beans and grains. Ah, they are supposed to be soaked. Yeah. But again, I give them more time, keep them moist, and create chilis and casseroles that I enjoy. I even take time with oatmeal. Rather than pay attention to it as it cooks or nukes, I cook it earlier than I need it, set it aside, and let the rehydration commence. Need some heat? Mr. Microwave can add some energy at the end. I had a tough time timing rice because it would burn while simmering. Now, I cook it for a minute, lid it, and take it off the heat. I don’t try to start it fifteen minutes before I need it. Perfection and perfect timing is tiring. I make it up to an hour earlier and let it set.

There’s probably a cookbook that already covers all of this; but experience has steered me away from recipes and directed me to techniques.

The same lesson applies to work. In the work world, the recipes are the checklists and procedures that must be followed, frequently because of tradition. Much of the urgency and drama is created by “we’ve always done it that way” and “because they said so.” Preparing tasks early when time allows, then setting them aside, lets some things simmer. Sometimes, while things sit, better ideas and alterations arrive. Rushing to a boil can create messes and occasional alarms. If a diner is paying for a gourmet meal, then give them one; but they may only be hunting for quick something. Don’t make them Eggs Benedict when all they want is a hard-boiled egg and a piece of cheese.