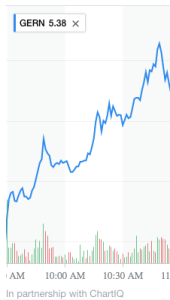 Here’s a happy chart for a long term investor. In less than an hour and a half, stock in one of my oldest positions rose from ~$5 to over $6.60. Over 30% rise in under 90 minutes. Extrapolate that out for an entire year and re-retirement is obvious. Pull back for the broader view and notice that it was under $2.50 within the last month. This is the way biotechs work, and don’t. Geron had good news (that someone may have gotten early, but that wouldn’t happen because that wouldn’t be right) so the stock climbed, and then climbed more as the data was made public, and then the investors kicked up up when the price went over $5. In the meantime, I bought another biotech instead, AST. It promptly went down, which was fine with me.

Buying biotech stocks is one of the riskier investment strategies. Biotechs are like startups, but amplified. They have to be because they involve humans and health. An electronics startup can invent an idea, fund it, build it, and sell it in a year or so. (Someone tell MicroVision that.) A biotech has to step carefully, openly, and slowly to make sure the public, the patients, the doctors, and the federal regulators can keep up. Theory, then research, then lab tests, animal tests, and watch years of cash burn and consternation go by. Then, human trials. First comes safety, then efficacy, then dosage (not exactly, but that gives an idea of the process.) Each phase takes years to plan, conduct, and understand. If all goes well enough, then the treatment gets reviewed for months or years by the FDA. Sometimes the FDA approves the treatment. Sometimes they tell the company to go back for more data. Sometimes they say stop. Those are years of expenses with little income, lots of risk to the company and the patients, and too many opportunities for chaos or competitors to challenge the company. But if they succeed, if they succeed…

Geron is working on Imetelstat, a name so convoluted that I always have to check the spelling and never feel that I got it right. The data is specifically for a blood disorder but the implications are far grander. Geron has sold off almost all of their technologies to keep the company alive. Their remaining prominent treatment is based on managing telomeres, the molecules that tell cells to die or not. If cells don’t die properly, they can threaten the patient with cancer. If cells die too easily, it is more like autoimmune diseases. (All of this is my amateur understanding. Want the real data? Check with the company, the SEC, and the FDA.) If the treatment works, then the technology may be extended. If the technology can be extended beyond blood disorders and into other cancers, then the company may finally live up to its potential. Hence, the spike after a long wait.

My wait has been long. GERN is the only stock I bought as a tip from a friend. That was in 1999. Within three months the stock went from $14 to over $71. I felt brilliant for what little I knew about biotechnology, and grateful for my friend. Then, the Internet Bubble burst and so did irrational exuberance. Years of delays and trials have now stretched into decades. Phase 2 trials are good, but in the normal process, Geron still has to conduct Phase 3 trials and hope for a quick FDA approval. Those who follow this blog are aware that I’ve sold almost all of my portfolio as I continue to work at recovering from my Triple Whammy. Only a few stocks remain, most of which are disruptive companies that I think are under-appreciated. Each has the potential to rise as GERN did. And then it didn’t.

By the end of the day, that $1.60 rise dropped back to a $0.14 rise. The activity of the last two weeks could be a case study in the various factions within the investment community: long term shareholders, shorts, day traders, institutions, insiders, and possibly nefarious individuals and organizations. I buy stocks for the long term precisely because fundamentals and patience free me from the noise of fluctuations. $0.14 sounds small after watching $1.60 go away, but doubling in less than a month is very welcome.

I bought AST instead.

My consulting and real estate businesses haven’t suddenly exploded, but a gift of a monetary buffer from a friend freed up a much smaller pocket buffer I was holding in emergency reserve. At that point, GERN had begun its early rise, but without public data. Investing in biotechs is risky enough; buying stocks on rumors is even riskier. I looked at both of my biotech holdings and realized I preferred to have a better balance between the two. I bought some AST to even up the number of shares.

Welcome to irony. AST is the stock for Asterias, a company I am invested in because they are developing a treatment for severe nerve damage. There are few successful treatments for damaged nerves. Accident victims have few options. By applying stem cells to the affected area, Asterias has managed to help patients regain some use of their limbs. They, too, are in Phase 2 trials; but the size of the unmet need, the cost of living with damaged limbs, and the possible outcry for solutions may convince the FDA to speed the approval process. The irony is that Asterias bought the technology from Geron, and that transaction is one of the sources that has kept Geron alive.

I admit to an experience that has also cautioned me about innovative cancer treatments. Few work. Very few receive FDA approval. FDA approval would seem to be enough, yet Dendreon received FDA approval for a cancer vaccine and then went bankrupt. To me, Dendreon seemed aimed to reach profitability within a year or so, and could easily treat the prostate cancer patient population for about a billion dollars. That’s a lot, and that expense was one of the reasons claimed for its failure. If they succeeded, they would’ve out-competed companies that weren’t as effective but were making many billions more. Dendreon was actually cheap in comparison. The industry’s immune response could afford to challenge a sub-billion dollar startup with the industry’s phenomenal resources. Geron may encounter the same resistance. Asterias probably won’t. While they are both in clinical trials, however, everything is speculation – including the investments.

GERN’s spike was fun to watch. I set up my iPad just so I could see the chart action as I worked. It’s daily bubble popped, but I wasn’t dismayed. This is normal for biotechs with good news. A 30% rise in 90 minutes is small compared to what I’ve seen GERN and DNDN do. They and several of my stocks have risen 130% in a day. I recall one rising 230% in a day. Those were good days, and those days were inspired by good news. 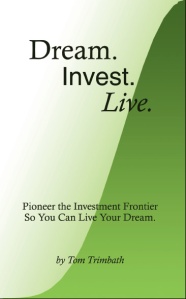