Adapting To A New Year

This year feels new, and old, too. Scrap that. Nothing is the same, anymore. Sure, human nature hasn’t changed much. We’re just getting to see the extremes of positive and negative that were hidden before the Internet gave everyone a megaphone (should we now have a gigaphone?). Other things have changed at every level from global, to national, to regional, to personal. Here we sit, two weeks into 2018, and people are adjusting to the fact that some things from 2017 haven’t evaporated while trying to make personal adaptations to major shifts in the world and society. If you feel flustered, look around. You’re not the only one. Look around again, and maybe find examples of how things may improve.

I’ll mention politics and social injustice to get them out of the way. The topics are too big and boisterous for one blog to handle. Congratulations to writers who aspire to such grandiose articles. This blog is about personal finance with an emphasis on the personal. Before I set those two top topics aside, I’ll refer again to a book that strongly influenced my perspective on technology enabled societal shifts. Powershift was written by the author of Future Shock, Alvin Toffler. Basically, old institutions were based on physical power and geography. Kings had armies to protect borders, and maybe to go beat up the neighbors. Power didn’t reach far because information was slower. Technology changed that. As information spread, so did reach. For a short period, empires expanded beyond continents and hemispheres. Now, information is effectively instantaneous making the world one community. Armies aren’t as important because borders aren’t as important. People who control information control power. As the power shifts, the old regimes may exercise their physical power to prove their power, but they’re really just proving they are anachronisms. Unfortunately, the transition won’t be easy or painless. In the meantime, duck-and-cover may be a real response. In that case, flustered is an understatement. Fortunately, patience can eventually pay off for the species and maybe society. Financial markets may be booming and busting for a bit.

See how long that paragraph was? And that’s reducing the situation to one reference and one set of consequences.

Ironically, the global shifts are emphasizing regional identities. Like many regions, the Pacific Northwest, and particularly the Salish Sea , are entrenching around values. I’m glad I’m in the midst of folks that want to treat people as if they are people, and the planet as if it is our sole source of sustenance. The consequence is a wary eye from the powers above, and an increased cost of living that is fine for folks with sufficient discretionary income. Seattle’s unaffordability persists because many people who hold those values also hold jobs that provide them with $5,000-$6,000 a month after paying their basic bills. Of course, raise the taxes, the parking fees, and the cost of doing business. What’s an extra $10 or $100 out of this month’s spare $5,000? It goes to a good cause. Unfortunately, Seattle and other parts of the region effectively become unaffordable to the other half. Go to Seattle to see a show? That one trip is a major portion of my monthly budget. It is a good thing there’s so much talent on the island that I can find entertainment here, instead. Maybe dissatisfaction with the larger identity may prompt a more official recognition of a regional identity, like Cascadia. I continue to be surprised that Puerto Rico hasn’t taken their recent budget and disaster experience as inspirations to declare independence. Would the sanctuary cities of the Puget Sound region get sufficient federal assistance after an earthquake? I use that as inspiration to maintain my earthquake kit and strive to support my local community. 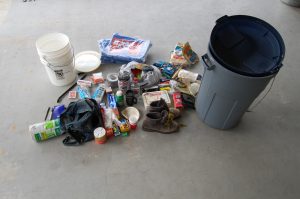 Personally, I’m adapting to circumstances that could seem personal but are more common than I expected. Health insurance swings are weird, but aren’t surprising considering the political influence. Health care is a separate issue, and one I tend to with diet and exercise and I suspect an exasperated naturopath who’d prefer I try a few more tests and treatments. I do what resources allow, and am getting better because of her more basic suggestions. (Though I am having a rare martini as I type.) Managing a business based in the Gig Economy was uncommon several years ago, but is increasingly common. Evidently, of the millions of jobs created since the Great Recession (the Second Great Depression), at least 95%, and maybe all, of the jobs were created within the Gig Economy. Full time jobs came back, but an equal number were eliminated. The result is higher corporate profits and higher personal expenses. I didn’t appreciate a steady paycheck, regular work space, and benefits fully until I tried mimicking them myself. I have yet to succeed, but I’m getting closer thanks to adding real estate to my already eclectic portfolio of positions. (Looking forward to helping people move by helping them buy and sell houses.) As I type, there’s a meeting with a fun publishing client tomorrow, a nascent long-term part-time writing gig, a nascent intense short-term writing gig, a nascent workshop, and a speech to prepare for. If the nascents become actives, I may have to reprioritize my other gigs – and celebrate the fact that I could pay all of my bills, including taxes, some health exams, and pay down debt. For now, nascent. For now, patience.

As I wonder how my 2018 will develop, I marvel at the millions that are in similar situations, and wonder what will happen if those personal issues collectively decide to impact the regional and national influences.

This was a slapstick morning. I’m taking an 11 week real estate class where I can only miss three classes. Thanks to scheduling and computer issues, I’ve already missed three. Their webinar thinks my Mac is too old and my Chromebook is too new. The office computer was down. So, I swing by my nearest library – to find that they opened an hour after the class started. Jump in the truck and drive to the next library which is open! And has computers available! To find that the class software is incompatible with public computers. Luckily, a friend has a business around the corner. They had a spare laptop and voila! I got into the class only 20 minutes late – to find that the instructor didn’t make it either and the (excellent) substitute was talking to a class that was only one-third full. As weird as it was, that can be a recognizable day to people in the Gig Economy.

After such a personal effort for a class that tried to teach me what I already knew, my friend and I sat and chatted for a while.

We’ve both been supporters of social justice and environmental stewardship, and we’ve both working hard to live in an increasingly unaffordable region. We applauded those who run non-profits for those issues, but also realized how many people are like us, caring about the issues, but in survival mode to some extent. We watch the country struggle with catharsis and watch the climate probably pass the point of no return. Then we realized that some of the best examples to follow are those who recognize that we can’t go back a hundred or even ten years. We all do what we can. That’s part of being human. There are impressive people who are running for office, designing lives around inevitable climate change and resource depletion, generally finding new ways to live that respect a new world, or at least a new year.

Stay tuned. You know it is going to be a bumpy ride.