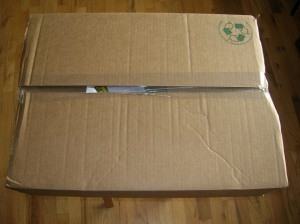 What better gift is there than the big brown box? Sure, the advertisers will tell you that what’s inside is what matters. And, there’s always that fond memory of that gifts that surprised and delighted as if they were the epitome of gift giving; but measure them all against the fun found in playing with the boxes and there’s really no competition. Even cats know this – and cats are experts at indulgence. What’s on your wish list that will be as much fun as a big brown box? Who would have the courage to give one as a gift?

I’d like to include a picture of a Transmorgifier from Calvin & Hobbes. Oops. Spell and fact check time. Make that a Transmogrifier. (There’s actually a Calvin and Hobbes wiki. Imagine that.) Flip the box upside down, stick a dial on the side, climb in as a small kid, come back out as – something only a kid could imagine. It’s also a multi-tasker. Flip it back, right side up, and it’s a time machine. Face one way to go forward in time. Face another way to go backwards in time. Or, ignore all that and use it to fly to an alien planet. Remember to pack the tuna fish sandwiches.

I’d like to include a picture from one of my copies of the books, but I just realized I gave them away for Christmas. A few weeks ago I cleared out some space in my spare bedroom, aka the rarely used office, aka rarely visited storage for my official papers and such. I was making room for my new career as a real estate broker and dropped into my minimalist mode. What was sitting around gathering dust that could live a more active life somewhere else? Cartoon books, DVDs, and a few other things looked like they’d make nice Christmas presents for someone shopping at Good Cheer, one of the local thrift stores. In addition to Calvin cartoons, someone gets a chance at the boxed set of Lord of the Rings movies. They may not come in a big brown box, but they may be appreciated even more.

I used big brown boxes as a kid. We put on shows, made a backyard fair, flattened them into stupidly fast ways to slide down wet grass in the spring, and generally used them as canvases on which we drew our childhoods.

I use big brown boxes as a grown-up, or at least as someone who has a few decades between now and childhood. A Transmogrifier, time machine, or space ship sounds awesome, but I restrict my playing with cardboard to more practical uses like drip cloths, a cleaner way to slide under the truck, or as a cover for my fireplace doors on cold, windy nights. (My fireplace is nice to have, but the damper is rusted open. Ventilation in every season! – whether I want it or not.)

Occasionally I challenge myself to take a big piece of cardboard, or even a big piece of butcher paper, and play. Just play. Draw, scribble, doodle, fold, spindle, and whatever else comes to mind. I admit it isn’t the same. Too many “shoulds” get in the way. I shouldn’t waste the cardboard or the paper. I should spend the time getting more work done. I should, …

There are regular reminders that adults forget how to play. Play is valuable. It relieves stress. It generates ideas. And most importantly, it’s fun.

One Christmas I went home with a slightly different set of gifts. Most of them were the usual things from the mall, but one was for my Dad. It was a Nerf ball. Not one of the fancy ones shaped like a football, not a gun, not a sword – just a ball. It was one of those Christmases after my parents had become empty-nesters but before they had many grandkids to play with. My Dad unwrapped his gift, smiled, and chuckled. My Mom (who could out-Martha Stewart Martha Stewart) wasn’t happy at all. “Why would you give your father a gift like that?” At which point my Dad bopped me in the head with the ball, and I tossed it back at him. We laughed. She shook her head. I can’t remember anything else from that Christmas, but I remember that Nerf ball and my parents’ reactions.

I’m due for another round of play. I look forward to more hiking, skiing, bicycling, and maybe even sailing; but those are all expensive. The toys I have sitting on my living room shelf are a bottle of Mr. Bubbles (for blowing bubbles), a yo-yo, water balloons (which are fun to fill and freeze as cheap and temporary outdoor ornaments), and a box of sidewalk chalk (definitely something for drier days.) Boots, skis, bicycles, and boats can be fun, can be practical, and are definitely expensive. Shop right, and twenty dollars can buy a lot of toys.

Christmas is only a few days away. The recycle station will be busy as soon as it reopens, and that dumpster for the cardboard will fill fast. Maybe hang onto some of those boxes just a little longer. Even if you don’t have kids and can’t remember how to act like one, leave one out for the pets, see what the local deer and bunnies do with one, try folding one into an enormous paper airplane. Need ideas? Isn’t that what egg nog is for?

Christmas is only a few days away. If the must-have gift is already gone from the stores, if you can’t think of what to get the person who has everything, maybe just find a big box. Throw in some crayons, magic markets, tape, and maybe some stickers. Whether it is a big brown box or something similarly silly, make something that helps them make something they can’t even imagine because it’s been so long since someone gave them a reason, an excuse, and an inspiration to simply play. It takes a bit of courage to do something different, but what are those memories worth?

I hope you all enjoy the season.

PS The forecast is for snow. Calvin and Hobbes fans know what that means: Deranged Mutant Killer Monster Snow Goons!