How many writers are there on Whidbey Island? The bookstores probably know because they’ve probably met most of the authors when they come in to try selling their books. Authors may not know. Authors like to meet authors. That’s odd considering most authors are introverts, and a club of introverts wanting to meet other introverts might have a small roster. Readers like to meet authors, too, which is why it was nice for one of the local bookstores to host a panel discussion of four local novelists. I’m glad I went. Novelists are good at telling stories, one of them is coordinating a workshop that I’ll be a part of on November 11th, and I enjoy listening to passionate people who’ve done more than talk about their passion. Authors actually get something into print. Besides, serendipity encouraged me to attend by cutting off power to my house for the day.

Langley may be a small town on the quiet southern half of a rural island, but it has an abundance of book stores. The South Whidbey Commons is unique. They have books, of course; encourage local authors, as do others; serve food and drink, a dangerous combination in the vicinity of books; and operate the business so students can learn how to operate a business. I’ve given several talks there, but on Saturday I got to sit in the audience as they welcomed a panel of Dave Anderson, Jo Meador, Dan Pedersen, and Michael Seraphinoff. Four novelists, one hour, and not enough time to hear all they have to tell. Want to know more? Read (and maybe even buy) their books.

It was a standing-room only crowd, a handy feature on a day when a snow storm was approaching. All of those warm bodies kept the room cozy. I took my typical seat in the back and tried to keep my mouth shut. I’ve been on similar panels, and enjoyed them. It was entertaining to hear others’ motivations, processes, and experiences. Story telling is part of being human. Writing is more recent, but most people write at least something thanks to email and the internet. Becoming an author, though, is obviously a lot more work, takes a bit of courage, and makes every author reveal vulnerabilities – especially in the age of the internet.

The unspoken messages are sometimes the loudest. At least three, and maybe all four, of the authors came from non-writing careers. Writing was involved, but the careers were in anthropology, politics, and database management. Not exactly the stereotypical path of first pursuing Master of Fine Arts degrees. I’ve seen it before. People who were forced to document their work were effectively forced to write – and write concisely to a deadline. The same thing happened to me. Frequently, I’d spend five days dealing with technical and engineering issues at NASA, and then reduce the experience to a few hundred words translated into management-speak within a couple of hours after getting back to my desk. Fear the blank page? There’s no time. Make the blank page fear you!

There was a pleasant surprise near the end. One of the members of the audience knew about Jo’s workshop, realized no one had mentioned it, and asked a leading question that she and I could answer. Thanks for the plug, Talia. On November 11th, Jo will spend the morning conducting a workshop about writing and editing (for details, check with Jo), and I’ll spend the afternoon describing how write for the internet and how to self-publish. Another way to look at it: Jo will handle the fundamentals that never change, and I’ll handle the environment that’s so fluid that every time I teach it I have to change it. 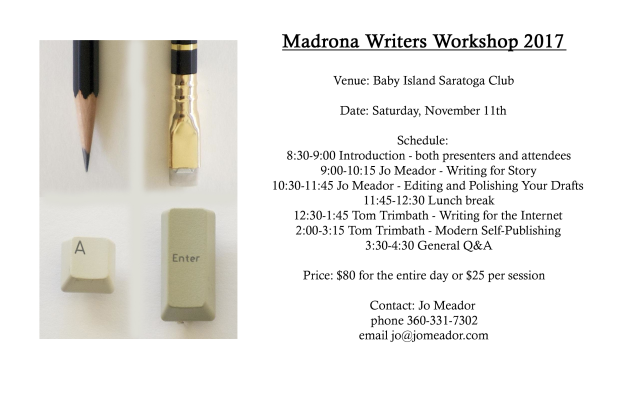 Writing for the Internet starts with the same goals of most writers and authors: gain exposure, read an audience and a community or a market, spread a message, and if the writer is lucky, maybe even make some money. That last one is tough, but that’s always been the case. Style has changed. Being concise is much more valuable thanks to shorter attention spans and the visual limitations of screen sizes. Adhering to various manuals of style isn’t as appreciated as producing something that can be searched, found, and shared. Book authors get to create tomes that are hundreds of thousands of pages long, but on the internet they can expect to find tl;dr (too long; didn’t read.) Get a slice of that message across in 2,000 words, or 500 words, or even 140 characters and more people will read it. Give up on the idea of controlling formatting. Elegant fonts, page layouts, and professional headers and footers are lost on devices where the reader can grow, shrink, and change the color of the text. What are you reading this on: a monitor, a laptop, a tablet, or a smartphone? I don’t care because I don’t try to optimize for any platform. The formats that matter are headlines, images, links, and hashtags; all things that lead to searching and sharing. Be too common, and the words get lost in the crowd. Be too uncommon, and never be found. Write about something others care about, make it easy to share, and reach farther than most authors did thirty years ago. Then, pull up the analytics and truly learn what resonated with readers, and what was there mostly for self-satisfaction.

Modern Self-Publishing has become so common that there’s less of a reason to make the distinction since I first used it in 2002. Print-on-demand is such a common way to print a book that it’s hard to distinguish from traditional printing. E-books are so ubiquitous that they’ve standardizing on prices, file formats, and delivery mechanisms. In the early years of the movement, I wrote a book about the technique, but the technology and the industry changed so quickly that the book had to be edited and re-released every six months. I gave up and simply reinvented the message every time I taught the class.

The title of one of my books (and the basis for this blog) is Dream. Invest. Live.

It is a self-published and due for a second edition. That first word, Dream, is something that many people put off until retirement. Authors are writers who finally gave up and quit waiting. They dreamed, or at least strongly considered, of something that should be told; invested amazing amounts of time, mental anguish, and sometimes money writing the story; and then get to live the life of an author – which usually means having some other source of income. As one of the authors mentioned, most books only sell a couple of hundred copies. I’ve seen the data. Very few succeed financially, though the few that do have basically written themselves a lottery ticket.

To fellow Whidbey authors, my curiosity encouraged me to start counting how many books have been written by authors who live on the island. Go to the Whidbey Authors Facebook group if you want your books to be counted. I suspect the total is in the hundreds. That’s a lot of gifting opportunities, and a lot of opportunities for authors to meet with authors. We can compare notes on how well our notes have sold.

To fellow Whidbey writers who haven’t published yet, well, by now you know about the workshop, and you probably suspect that plenty of us are happy to help outside of such structured environments. People everywhere have fascinating stories to tell, and people everywhere want to hear new stories. Welcome to a fundamental part of being human.

For now, the power is back on, the snow is getting closer, the house is up to 65F, and I’m probably done writing for the day. It’s time to sit back, share this post, stoke the fire just in case the power goes out again, and watch a movie I picked up from the library. Books are great, but I’ve been writing so much I need to take a break from reading for the evening. Of course, if the power goes out, then out come the books and even more stories.

2 Responses to Commons And Whidbey Authors