A Little Bit Of Help

“It only took me a couple of minutes.” It would’ve taken me about half a day. Dropping my bicycle off at Bayview Bicycles was an excellent example of the value of expertise. I rode across America

, so some know me as a cyclist, but my bicycle would cringe. Just because I ride it doesn’t mean I know how to take care of it, at least not efficiently. I appreciated his work and his attitude so I did the modern thing and Liked his Facebook page, and posted a short testimonial on my Timeline. (I would’ve done the same on Twitter, but the business doesn’t have an account.) It was a small gesture, but hopefully helpful. Then I saw what someone posted about me. Wow.

It can take courage to ask for help. There’s a vulnerability and an admission of being human. Being human runs counter to some people’s facades. They must project perfection because they don’t want to expose any chinks in their emotional armor. I get that way sometimes, too. But, I have finally become more comfortable acknowledging some of my ignorances and inefficiencies. That awareness saves me a lot of time. Asking for help also saves me money, eventually. It’s cost incurred in that time between now and eventually that makes me hesitate.

I can fix my bicycle. Give me enough time, the right tools, the right videos, and the right attitude, and I can eventually fix this, grease that, adjust those. I’m not efficient. I may be trained as engineer, but my expertise is in aerospace, not mechanical. I work well with orbits and airflows. My brain can understand getting gears to mesh, but my fingers and hands aren’t trained for those fine maneuverings of parts and tools. The rear rim was old enough that it was cracking. The only way to fix it was to replace it, and the bicycle is so old that any replacement wouldn’t quite fit. I took the old wheel in and let Bayview Bicycles build a new wheel and put on a new tire. I should’ve taken the rest of the bicycle, too.

When I got the new wheel (at a reasonable price and in a reasonable time), I took it home for its inaugural ride – and found that the wheel wouldn’t spin. The wheel was fine. The bicycle was fine. They just weren’t fine together. New parts on an old bicycle meant adjusting the brakes, the gears, the derailleurs, and I didn’t know what else. A while back I sold my bike work stand, which meant propping it up in the carport and trying to balance everything. A quick review of the steps involved made me realize that 1) I could do it, 2) the setup, training, adjusting, and testing would add up to a few hours, and 3) there was great opportunity for frustration. I had other ways to spend my time, and maybe even get paid for my other efforts. I took the bike and the wheel back to the shop.

One convenient thing about the shop is its location, right beside one of my frequent co-work/coffeeshop stops – Flower House Cafe beside Bayview Farm and Garden. No surprise, their landscaping is excellent. (Also the setting for one of my more popular photos. 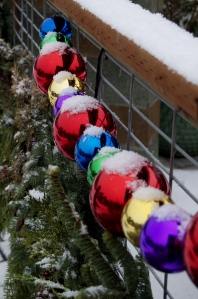 ) The aromas are nice, too. It just happened that a friend asked for some help with publishing his book, so I suggested we meet there while my bike was worked on. A nice way to spend a morning.

If all works well and computers don’t crash (again) an entertaining cookbook could hit the market in time for the holidays. Stay tuned.

After the meeting I went over to check on the bicycle. It was already fixed. It was already fixed, tested, and improved. Evidently, the real work was probably done before my tea had cooled. The work was so quick that even charged by the minute it would’ve been cheap. I mentioned that I’d post a quick testimonial as thanks, and was thanked.

A few chores later I got home, booted the computer, and dropped in a few lines about my experience. Not much, but every bit helps.

Then I saw a notification. Someone had posted about me.

What goes around, comes around. Nice. And then I read and read and had to hit “See More…” because he’d written more. I wrote two lines for Bayview Bicycle. Don Scobie (Whidbey Island Baking Company) wrote 24 about how I’d helped him. I paused. I blushed. I typed Ah, shucks. And I meant it. It was an overwhelming response and greatly appreciated. A super quick update? Wow.

I help people publish their books. As a consultant, I help people pursue their projects, which means helping lots of writers on Whidbey. The island does attract artistic type and talents. It’s one reason Jo Meador and I are conducting a writers workshop

on November 11. (Details) There is a joy in helping people, especially in showing them how to simplify complex tasks, and how to mutually benefit from matching talents and skills with needs. Got a question? Ask friends. Facebook and Twitter are good for that. Need more help? Ask someone with at least some experience. As it says on my web site; “A hour or a day invested well can pay in that most valuable commodity: time – and probably save some money too.”

The pleasant surprise comes from hearing how much the help is appreciated. Thank yous aren’t common enough. Some doubt their sincerity, as if thanks are followed by asks. I say thank you anyway because it makes me feel better. I forget how much they can be appreciated. We can never know the impact we have on others, but having the experience reflected back is powerful.

Someone passed along a simple insight. Librarians can truly enjoy people who ask them for help. It takes training to efficiently retrieve just the right amount and type of information. Google provides a fire hose. They provide a finely decanted glass of clear water. I enjoy helping people with their projects, and enjoy listening long enough to hear how best to help, and then seeing that help truly help. Evidently, I helped today. And, I received help today. Instead of frustration, I experienced a freedom. A working bicycle is more than a couple of wheels. It is transportation, recreation, a stout backup in emergency situations – and in my case – a reminder of a life-changing event. My bicycle is fixed. Thank you.

1 Response to A Little Bit Of Help