It’s been a busy weekend, here in the Gig Economy. The good news is that I’ve had enough work to fill the days. The other good news is that I’ve had enough work to fill a good part of Labor Day. That could also be seen as bad news. One reply on Twitter pointed out that I should maintain balance by not working on the holiday. Ah, I look forward to the days when I can afford such luxuries. In the meantime, I work when work is available (with an occasional day off). I’m also about to get much busier finding other ways to fund the funds to finance my life. Life in the Gig Economy works to a different calendar, a different schedule, and with different holidays.

Labor history was a bigger part of my education than most, I expect. I was raised outside Pittsburgh just a few miles from several mills. My Dad’s career developed from his life as a trucker. His Dad was a miner. I worked in a steel mill, and was required to be a member of the United Steelworkers of America (though they may have changed their name by now.) My Dad was a shop steward in the Teamsters. His Dad could’ve been in the United Mine Workers, but by he died by the time I got old enough to ask about such things. It wasn’t until I was an adult that I realized the songs I learned in grade school were union songs about solidarity and the struggle against power. So much for Mary Had a Little Lamb. How about Sixteen Tons and being trapped by debt in a dangerous job? Great songs for kids.

I saw both sides of the union versus corporation battle.

The site of the Homestead Massacre was only a few miles from our home. Knowing my Dad’s work schedule was proof of how hard some people had to work. Visits to my Granddad’s hometown were proof that good, hard work wasn’t a guarantee of an eventual good and easy retirement.

I was also threatened in the mill by other workers because I worked too hard. My Dad told a story about trying to deliver home heating oil during a deep-freeze, but had to talk his way past a fellow union member who pointed a shotgun at his head when my Dad tried opening the gate to the depot. He delivered the fuel eventually. Just a few miles from my Granddad’s home, rival factions within the miner’s union killed one of the union officials and his family.

I thought I left all of that behind when I moved to Seattle to be an engineer at Boeing. There, the engineers’ union was active and trying to gain the respect of the corporation. When I hesitated to join the union, I was threatened. The threats convinced me to never join. (They said they’d slash my tires. That wasn’t much of a threat. I lived close enough that I walked to work. Maybe they’d slash my sneakers.)

Union versus corporation is one of those battles that I don’t engage in because I’ve seen too many sides of it to be fully in either philosophy. It seems to me that abuse of power is the issue, and that sometimes laborers have to organize to generate enough power to negotiate, which has resulted in some great social advances, but which has also resulted in some great abuses and injustices, too.

There is talk within the Gig Economy of the need to unionize. I can certainly see the benefit, but I can also see the difficulties. Previous unions were built around mill towns, ports, mining towns, farms, and other industry centers. Need to gather a crowd? They’re all in one place. The Gig Economy is decentralized. That is one of its strengths and freedoms, but it is also one of its weaknesses. A coal mine needed miners who lived by the mine. An online business needs workers who have access to a computer and the internet. Instead of having a few hundred people to pick from, modern businesses rely on millions of workers willing to do jobs for free or for very small fees. If a few stop work in one country, just as many are available in a few seconds from somewhere else.

One reality of the Gig Economy is that, when the work shows up, it needs workers who are ready now, not later. The work defines the schedule. The schedule defines peoples’ lives. Weekends and holidays are simply anachronisms on the calendar. To those who are practiced at it, the flexibility is natural. Expecting to only work on proscribed days is quaint.

The uncertain nature of the work is an incentive for some to organize. It is also an incentive for me to explore other options. Irregular work makes it hard to make regular payments. This weekend’s work included some rough patches. People are stressed. Some of the stress is financial. Some is based on overload. Put the two together and don’t be surprised if people aren’t relaxed and the work stumbles instead of flows.

After a particularly tough bit of news today, I decided to get more proactive. Thanks to my network, several appealing opportunities have been suggested, but none have made a commitment. It was time to check their status. Some other jobs have opened on the island. Time to refresh and customize the resume, yet again. If that’s not enough, I’ve decided to start taking classes again, though I haven’t decided which ones, yet. Programming, to leverage my geezer geek skills from my FORTRAN days? Math, because it is a comfort zone and also a possible entry into finance? I joke about embarrassing myself in German, Japanese, and Russian; but I think those hurdles are too high to jump. And then there are the conventional careers that have always had some elements of the Gig Economy: real estate, appraiser, etc. Training is required there, too. Pragmatically, I have to balance time and money more than interest and familiarity.

There’s a rush order due tomorrow. I don’t know if they need my help. I hope so. I could use the money, and it is work I am comfortable with. If not, it might be a good day to take advantage of the fact that I don’t have any other commitments scheduled. Maybe I’ll take the day off to consider my options, to consult with myself for myself. I could use the day off. Maybe I’ll call it a holiday.

In the meantime, at least I got to watch a fiery sunset because I worked from home. 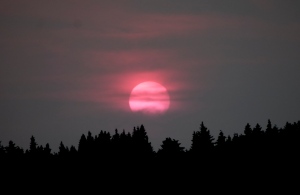 1 Response to Laboring on Labor Day