Celebrate! My first week of taking one day off each week. That’s why I spent so much time this weekend working without getting paid. That may not sound right, but it was a good idea. Give me some free time and I spend some of it working for free, volunteering. Yesterday there were a few hundred of us doing the same thing, and I helped a bit. They inspired me to do some solo volunteering today, and that felt good, too. There’s an infinity of ways to practice self-indulgence. Sometimes that includes helping others.

Small towns are known for barn-raisings. That’s a nice image, though barns are more likely to be made from metal and built by work crews, now. Locally, there’s an organization that does something similar, but in ways that make more sense in today’s world. Hearts and Hammers pulls together a few hundred volunteers to help a few dozen homeowners for free. It is a smart organization. If someone wants to volunteer, their answer is usually, yes. I don’t know the details of their selection process, logistics, and organization; but I do know that they found work for people whose greatest strength was enthusiasm, plenty of work for professional contractors, and even work for cooks. They served breakfast and dinner for those hundreds, and then someone organized entertainment, too. It is an all-day, sweaty party that leaves dozens of households better off for the price of a lot of sore muscles – and smiles. 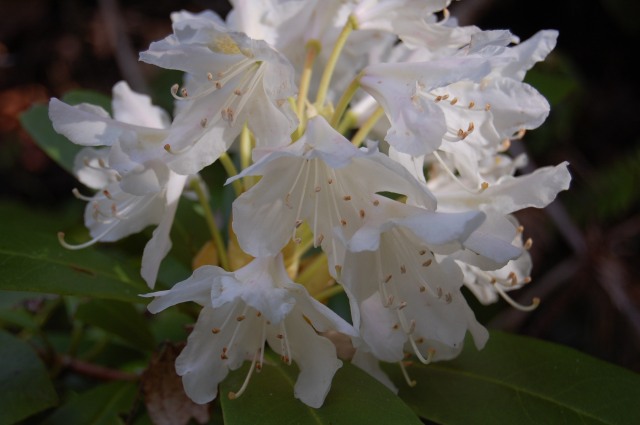 I was lucky. They only asked me to take photos at five of the sites. The only time I had to sweat was when I hopped into my sun-warmed truck. I was also lucky because I got a mini-tour of the work they did. One crew helped someone resurrect a natural and native garden that was getting out of control now that a spouse had passed. Another site had a dozen trees felled for safety, rails, and probably some sunshine and firewood. Want to attack blackberries? One group easily filled a truck. I saw two kitchens getting rebuilt, plus a bathroom, a porch, and a wheelchair ramp.

It was fascinating watching the energy and activity. Professionals’ trucks were open displays of amazing tools and equipment. Parked beside them were econo-cars and luxury sedans. Carhartts, jeans, sweats, and whatever happened to be handy made for a fashion show that will never see the bright lights, but should.

It was also a display of humility and courage. It isn’t easy to ask for help. The most common cause was simple bad luck. One, two, then three upsets overlapping can drain most people’s rainy day funds. If a medical condition is involved, it may also mean that the work can’t get done by DIY. That’s when a community impresses.

I enjoy photography. Most of my photos are of nature or abstracts, or both. I didn’t expect the photo coordinator to contact me, but I’ve always been impressed by Hearts and Hammers, so it was a good introduction. Besides, there are some long-delayed projects around my house that I can’t afford to fix. Friends have suggested I nominate some of my chores. Maybe next year, but no, because by next year I’ll be able to afford to get the work done – a rationalization I’ve used for several years.

I enjoyed taking photos of people at work. There’s no time for posturing and posing. People are less likely to complain about a hair being out of place, or having a smudge on their face. Taking pictures of people volunteering is also fun because there are lots of smiles.

It felt odd staying behind the camera. There were a few times when I lent a hand, but I wanted to be more active. So, on my first regularly scheduled day off, I indulged myself by getting sweaty, muddy, dirty, and scratched. It wasn’t an official work party, but as Site Steward for a Land Trust property (Hammon’s Preserve, Whidbey Camano Land Trust), I knew where there was lots of work waiting for me, and tasks that were literally growing in the meantime. I decided to tackle a tangle of thorns and barbs, a blackberry patch that was overgrowing a barbed wire fence.

Until about a decade ago, the property was a nine acre farm. Some livestock lived there, too; so their pastures are fertile. The herbivores are gone. The weeds are happy.

Thanks to dozens of work parties, we’ve made progress against Scotch broom, holly, English ivy, thistles – and blackberries always blackberries.

Whacking blackberries is gratifying. Sure, there are scratches; but cutting back dozens of feet of thorny branches from new and old barbed wire leaves an open corridor of accomplishments.

About halfway through, I had a welcome break. The neighbor came out to thank me. They’ve lived there for forty years, so he had stories to tell about the farm, the farmer, and the history of the farm buildings. Evidently, the one we consider a tool shed was originally a tiny schoolhouse. I wondered why it had a spot for a woodstove and a lot of empty space. We put a new roof on it without realizing it was historic. 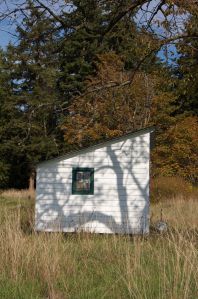 Whether it was Hearts and Hammers, or Whidbey Camano Land Trust, or any other organization that hopes to help, it is hard to know how far the effort reaches. We put a roof on a tool shed, and saved a bit of history. A few dozen people have better homes now, which may free them up to accomplish something greater or at least live with less worry.

I admit that some of my volunteering is indulgent. I do it because it makes me feel good. I’m probably not the only one. But, when I think about the ways I could’ve spent these days, that sounds like a pretty good trade. I hope it helped. I know it helped me.

Now, after I post this, I have some laundry to do.

3 Responses to Indulging In Volunteering