Random acts of kindness are greatly appreciated. For a week or so this month I had the luxury of using an empty desk in the heart of Langley, our small tourist town. Two people have been watching the development of coworks on the south half of Whidbey Island, know that I’m an advocate for working spaces for Gig Economy workers, and knew that I have yet to find a place that meets my requirements. They offered, I accepted, it was good; and it isn’t the only option in town. Coworks have hit a series of quiet milestones in the Village by the Sea, so I wanted to celebrate their accomplishments and help chronicle the new way of working as it works its way into a historic place.

Ross Chapin is an architect known around the world for designing Pocket Neighborhoods, intentional communities that emphasize shared spaces, fine detail, and consequentially more sustainable living. Ann Medlock’s work extends around the world as her position as Founder and Executive Director of Giraffe Project, an organization that supports “compassionate risk-takers who are largely unknown, people who have the courage to stick their necks out for the common good“. Quaint little Langley, home to two of many similarly impactful people. It shouldn’t be a surprise that Ross has nice offices. He also has a few empty desks. Ann works from one, and they’re hunting for a couple of other people to work from the other two (the sweet window seats.) Thanks to their generosity and a cooperative schedule, I was treated to trying out one of the window desks for a while. (Great people watching in a tourist town.) 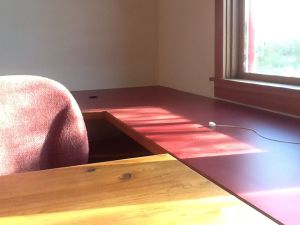 Workers in the Gig Economy frequently try to fit themselves and their laptops into coffeeshop and library furnishings and schedules. Quiet and privacy are traded for access to food, drink, Internet access, with a bit of accidental social networking. These aren’t casual workers, though. Their schedules can spread across time zones, coordinating with clients and colleagues can require quiet backgrounds, and a cafe table or the arm of a chair can be a bit limiting when the work requires spreading out papers and other devices.

To me, what Ross is offering is the higher-end of a coworking environment. A few desks with a lot of room and a professional environment. One of the biggest benefits for me was being able to have a key. 24/7 access better reflects the Gig Economy’s schedule. It was also nice to be able to run errands without having to shut everything down and cart it around.

Not all solutions are the same. Three other coworks have passed major hurdles.

created a two section coworks. The outer section is more open, has several desks, access to the kitchen amenities, and a professional and fine art printing and supply business. Need a copy or something scanned? Do you want one or 10,000 copies? Need a pen NOW? They got that. The other section is behind a door, creating a combination conference room, web conference site, and room for spreading out those papers. It has been a handy place for private client calls.

is relocating their coworks (I believe) from the attic (which I reported from earlier) to the much more accessible and roomier backroom. There’s enough of a separation that the pesky espresso machine sounds can’t make it around the corner and down the hall; but food and drink are still available. Some of my clients prefer meeting there for the coffee, sometimes because it is familiar, and sometimes because it is a non-profit that teaches teenagers how to run a business.

The third place is the showcase of what is making this surge of coworks more possible (besides the tantalizing profit margins of running a coworks), The Big GiG

. The Big Gig Center is one of Whidbey Telecom’s demonstration sites for one of their initiatives that should be making national news. They’ve brought 10G Internet access to the island. Like with any such infrastructure project, it starts from a hub and works its way out. (My house is probably years away, but that’s okay.) The download speeds are impressive, but the upload speeds are incredible. Uploads that take an hour at home take minutes or seconds at the Big GiG. Sometimes they go by so quickly that I miss the notification, think it didn’t do anything, and then find that it was done about the time my finger lifted from the keyboard. One of their demonstration areas holds three desks, each with large monitors, power stands, task lighting, ergonomic chairs, and (temporary) storage. There’s also a conference table, massive whiteboard, and maybe VR some day. My clients who want the quietest environment ask to meet there.

So, why aren’t these all considered to be open for business and spreading the word? Thank small town politeness and considerations. Rather than try to outcompete each other, the various principals are trying to find a way to work as a consortium. Very impressive. Pay the consortium and work wherever works best. That’s an effort I encourage. In the meantime, it also means that some of the spaces are available for free, or at least for the price of a cup of coffee. (Good thing that I drink tea, which is even cheaper.)

I have no favorite, and that isn’t just me being diplomatic. I seem to be attracting a different set of clients recently, but I don’t know if this is temporary or the entrance to a new phase of my business. At this point, no one solution meets all of my requirements, though as a consortium they get very close.

For me, coworks emphasize the co-. The more people the better. 24/7 is important to me because, even though Langley works on tourist time, I frequently work from 8 to 8. Being able to leave my computer at the site would mean better health (a recent issue) because it makes it easier to commute by bicycle. Being able to bring my own food and drink keeps the cost of working out of the house down. There are hints of these various things happening, but not yet.

Coworks in small towns aren’t limited to Langley, of course. Even on the island I enjoyed using a space at Whidbey Tel’s Freeland office, and I hear there may be a coworks in my even smaller town of Clinton (though the commute’s about the same distance.)

The old economy of paychecks and W-2s is being replaced by the Gig Economy and its 1099s. In ten years, the number of Americans working as contractors rose by 60% with no signs of stopping. The economy is changing. My business is changing. And, I’m glad to see that the towns on South Whidbey are changing, too. Now, what do I have to pay to join the consortium, please?

(Check the “coworks” tag for more of the history including previous coworks.)