Listen to three friends and one news story and hear a thread that’s permeating society with cautions and clues about our future. 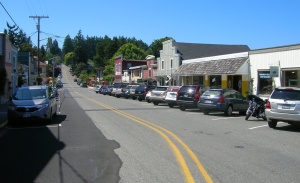 Good luck trying to be the first in line with new news in a small town. Everyone knows everyone, or so it seems. A friend and I were talking about the nature of small towns. The stereotype is slightly flawed. Unless the town is only a few hundred people, there are inevitable fractures and factions, or at least groups with different interests. It is easy to sit within one group with common interests and see them as normal and the rest as the eccentrics. My friend and I were commenting on what’s it’s like to be the bridge between the groups, seeing more diversity than most suspect. In a small enough town, it doesn’t take many bridges to connect the community. That can be a blessing in a crisis, and a cause for caution when seeking privacy. For me, I’ve lived within the anonymity of the big city and suburban life. There’s greater diversity, but it is also easier to be disconnected. Sit inside a big enough group and you can’t see the edge of it. That also means strangers are more impersonal, people can be treated without regard to whether they’ll ever be met again. Honk your horn in a small town and you better mean it because you’re doing it in a places with echoes.

Another friend made a comment today about my style of writing. I listen because they’re a writer, too. You can see it in this post. I frequently use pronouns, and am less likely than most to mention names unless it is as a compliment. Ironically, the style is vague, ambiguous, and somewhat impersonal. That contrasts with the way I talk in person, but words on the Internet are relatively permanent and can be taken out of context. For someone who wants to do a bit of sleuthing, they can reveal connections, or think they have. The fewer hints, the safer. Unfortunately, that also means that in a business like mine, news is muffled within a fog. I try to treat my consulting clients with discretion and leave it to them to talk about their use of my services. Some people, especially in small communities, would rather not let it known that they needed or paid for advice. I hear very nice compliments, but muffled news is also muffled word-of-mouth advertising. I apologize, but don’t expect to change because those basic values haven’t changed.

New legislation means that what each of us does on the Internet is no longer as private as it was. Most people won’t notice. The details can be confusing, so many won’t worry about it. (That’s also a measure of blithely we accept yet another loss of liberty.) The idea of a person’s browser history being for sale sounds silly, except that there is great value in such data. Marketers get a better idea of who will buy what and when and where. Various agencies are already using such data to predict things the government may be more interested in: who is doing what, when, and where. One measure I have of the importance of the issue is that, the more a person understands the issue, the more likely they are to be careful and cautious online; and that my friends and clients who’ve worked in such agencies are more likely to have computers that purposely don’t have the hardware to connect to the Internet. I can think of two (arguably both geniuses) that would resort to only transferring information from their “air-gapped” computer to a “normal” computer by paper and typing. Personally, I’ve seen slices of Facebook’s data of my activity and know that I can discern patterns. As I displayed one set of a data in one of my “Getting Started With Facebook” classes, a friend in the audience was able to figure out when I visited yet another friend. For a while I was helping someone recover from an ailment, and their house didn’t have cell phone coverage or wi-fi. A gap was born.

These anecdotes all reveal different aspects of anonymity and privacy; but they can sound abstract. That was until two versions of one question came up today: what do I think it will be like in 5-10 years, and what do you tell a 13 year old about how to act now to be ready for then? Abstractions and adults make for interesting conversations. The future of a thirteen year old child felt more real.

Let’s go back to the basis for this blog, personal finance. Even without Internet privacy concerns, broad databases are already being connected to affect our lives in ways not possible before. Applying for a job thirty years ago involved a nicely typed and printed resume on good paper, showing up on time and nicely dressed for the interview, and having good eye contact and a firm handshake. Now, some companies are asking for access to social media accounts, and are using credit scores as a hiring criterion. Taking it a step further, correlations are being drawn between the timing of online activities and credit risk. People who post late tend to have higher credit risks, regardless of why they’re online. Income, jobs, and the ability to get a loan are less in a person’s control; which is why it is more important to exercise proper control whenever possible.

One of my clients had two names. Don’t be surprised. That happens with writers frequently. One name was their real name, which was associated with their business, job, and resume. The other was a pen name, which was necessary because they were writing an expose about real people. We worked hard at creating the appropriate social media accounts and pages. Everything looked fine and distinct. Something, probably only one thing, went wrong. LinkedIn proudly stated that the two identities were connected and LinkedIn was happy to solidify the connection by cross-posting information between the profiles. My client had to abandon the expose. Sadly, probably just coincidentally, they were laid off within a few weeks.

The Internet connects computers. There are now more computers than people. As people use computers, and especially as people carry mobile, communicating computers, privacy is reduced, anonymity fades. Life in the modern world becomes more like life in a small town where what you say and do (including how you make and spend your money) and how you treat others becomes much more important. Within a small town, that creates community and intimacy. The person who buys and hires local has a stronger network than the person who heads for the big box stores. Within the wider population, that may be too much of a shock, especially when some of the neighbors are massive organizations. It might just mean that, when that thirteen year old turns twenty-three, they’ll have to assume to entire world is a small town, but without the face-to-face connection and the hugs and handshakes – and they should start acting that way, now.

As for anyone that want’s to sleuth through my social media accounts, well, I’ve published over a million words in books and blogs. You might be at it for a very long time.