Tonight there’s a full moon. Lately, every day has felt like a full moon, unexpected, uncertain, uncomfortable times as a world redefines itself. That’s what’s been happening in my life for the last several years. I’m getting very practiced at reciting my Litany of Optimism. It helps, but if I used a real rosary, the beads would be worn to grains of sand by now. A litany of ideas doesn’t wear out. My litany works for me. Perhaps one can work for you. Perhaps one can work for all of us.

The world’s been weird enough for the last month that the news media are confused. That  little revolution can be a good thing. I listed some of my optimisms for the world in my Thanksgiving post. I’m making so few assumptions about what’s happening politically and socially that I’ll leave those topics aside for now. I have enough to think about.

Without going into details, some of which are necessarily discreet, three of my largest clients are redefining their projects. The best scenario is an expansion that includes expanding my pay. The most likely scenario is that things don’t change. The worst scenario is that the work moves on. Each of the three has three scenarios. Trying to understand all of the implications and permutations kicks off moments of ease and moments of anxiety. When the anxiety arises, the litany gets recited.

Employment
I’m glad to hear that various aspects of my work is being recognized. Several independent sources have commented on my program management skills, publications, and consultations. Compliments are encouraging. Proper compensation would greatly ease issues. It can all improve with one phone call or email.

Housing
According to Zillow and Redfin, the market value of my house is rising about 12% per year, and is now building equity. Rising real estate creates a buffer than is difficult to use, but 12% applied to hundreds of thousands of dollars is powerful arithmetic; and I have reason to believe it is only just beginning on the island.

Community
Whidbey Island isn’t one community. Neither is South Whidbey. Neither is the southern tip of South Whidbey; but, I’m pleased to see the community building safety nets. In some cases, people fell before the nets were built, and now have to get lifted back above the net, but the trend is encouraging. People are caring about people. I volunteer, and am amazed at the efforts of others. Housing, healthcare, food, and havens are being provided. This is a good place to be.

Stocks
The value of my stocks is flat, but the value of the companies are increasing. Aside from my investment in solar energy (Real Goods, RGSE), each of the companies is making progress. That progress isn’t be recognized by the investment community; but when it is, the recovery can be swift. I’ve seen it in individual stocks before. This is the first time I’ve witnessed so many deflated positions with such potential. There are good reasons for me to look forward to 2017. (I’ll dive into details with my end of year report at the end of the year.)

Health
I got my teeth cleaned today, and they didn’t need to fix anything else. (Thank me for not including a close-up photo of my teeth.) I’m old enough that I always have health concerns (the major one being trying to afford health insurance, and eventually health care). I’ve gained weight because I’ve been working more than working out; but I also feel stronger. (A bit of arithmetic explains it. Adding ten pounds may be bad, but at 30% body fat, that’s still seven pounds of added muscle and bone. Looking forward to bicycling again, but that’s another story.)

Networking
This is a catch-all that includes employment and community, but I must admit that I’m happy to be included in so many conversations about disparate initiatives, projects, new businesses, and various ideas. Land projects, dances, coworks, art projects, welcoming new residents, interviewing old residents – the list continues. To get quantitative about it, my Klout score hangs around 59, and my Facebook connections are about as broad at the CEO’s even though I have far fewer Facebook friends. The ones I have are evidently very well connected. Glad to be part of their networks.

I could dive into minutia, and I do, but that happens inside my head as I walk. My details aren’t as important as yours.

Too many of us are having tough times, whether financially, emotionally, or existentially. The worries can overwhelm. Worries can especially overwhelm if they attract all of the attention. So, deny them. Pay attention to optimism, not just pessimism. The solutions are positive, not negative. Recognize the negative, and then look to the positive to negate the negative. 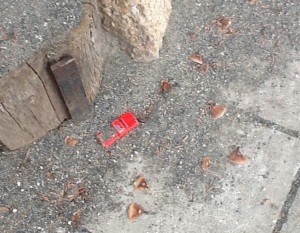 I can’t say that my litany has solved anything, except that it has. Realizing the near reality of optimism is one of the most powerful tools and exercises I have available. We can each build such a tool and use it ourselves.

It’s a full moon tonight. That means a low tide in the dark. It’s cold (freezing, actualy), clear, and relatively calm out there. After I publish this post I intend to walk the tide flats in the dark (and in my boots.) Ironically, in the darkness is when I am most likely to be looking for the brightest thoughts.

1 Response to Litany Of Optimism