If I started listing everything I’m thankful for, I could write chapters, books, series, volumes, shelves of material. An intriguing thought comes to mind, if I could live long and prosper as long as I wrote about gratitude every day, I’d probably happily do so. (I add the ‘probably’ because absolutes never happen, almost.) Recent political, environmental, and societal events prove that’s it is easy to write about the worrisome. Let’s flip that. Here is a short list of things I am thankful for, especially in today’s world.

Everything That Works
Here’s an overwhelming experiment. List everything that worked today. I look around my house and am grateful that the oven and stove can make things hot, the furnace is keeping things warm, and the refrigerator and freezer are keeping things cool and cold. Each of those are complicated systems that rely on an infrastructure that extends for dozens or hundreds of miles. Include the Internet and the infrastructure wraps around the planet.  Chuck the Truck continues to truck on whenever I need it. My 52 year old house keeps out the weather, keeps in the warmth, and keeps me safe. My body keeps living as the decades go by. All of that contributes to me continuing to be me, even though I don’t know what the Real Me is. The planet, the Sun, the Universe continue. Thank you, gravity, air, water, the laws of physics, and the rest.

People
People are becoming more compassionate, even when it doesn’t look that way. Fewer people are dying from violence. People are recognizing the value of community. Diversity is increasing, simply because more people are creating families that care less about boundaries. People are beginning to understand their power, and some of the disruption we’re witnessing is the maturation of that understanding. People are expressing themselves because they’ve learned that they can. Gradually, we’re learning a new set of manners.

Society
Shocks in the “system” are evidence of an awareness of a new world that has learned the conventions that should be left in the past. Equal and opposite reactions happen in physics, but in psychology and sociology, a negative event can create an overwhelmingly positive response. There’s a lot of work to do, and I am amazed at how many are doing the work, even when they don’t know how or have the resources to begin.

Information
The Internet is connecting people into communities that ignore borders. One reason a negative event can generate such a large positive response is because injustices are harder to hide. People in remote and stressful situations can find themselves the recipients of a far greater population of supporters from around the planet. For those who are courageous enough, they can learn the multiple sides of any issue, and use their own critical judgment on unfiltered information. I’m also thankful for the ability of curiosity to dive into fun explorations of trivia, history, any information that comes to mind instead of having to wait for authority figures to provide access after proof of need.

Technology
Alternative energy, artificial intelligence, 3D printing, virtual reality, new materials, more efficient systems, all mean a higher standard of living with an easier impact on the planet. We are awakening an amazing potential just as we need it, and that potential is decentralized, more likely to be in the control of the people who can use it, and frequently cheaper than the old systems. Ironically, one of the consequences of technology has been to prove the validity of natural systems. Both solutions apply.

Culture
One of the benefits of the free flow of information has been the awareness of other cultures, not simply as a label for other “peoples” but in terms of story, song, dance, perspectives, and lessons. Thousands of years of human life scattered around the planet reveal generations of experience. Some old ideas should remain as history, but many new problems may have old solutions, though the problem and the solution may be in different places. Now, they’re more likely to connect. We have created an amazing repository, and can use it for each other.

Knowledge
An awareness of the value of objective reality has been incredibly powerful. That’s why we know the Earth isn’t the center of – anything, which has unlocked a perspective that influences everything. Logic, reason, and data have made it possible for us to establish truths from which to build everything listed above. Aside from what it has taught us about our place in the Universe, objectivity has also taught us and proved that we are all one species, that we all have much in common – and that life has a common connection as well. I think the greatest lesson from detecting extraterrestrial life, intelligent or otherwise, will be that our differences are minuscule. Imagine having to explain our conflicts to another civilization. After we prove that someone else is out there, a lot of our assertions and assumptions will be proved invalid or insignificant. I trust that we’ll think it through, and improve our culture and society because we’ve done so before on a local level.

Keeping all of that in mind is difficult because the reality of the news can’t be denied. The negative pieces suggest what we should work on, though frequently lack perspective for proper prioritization. The positive pieces provide an opportunity to celebrate, which I think we shouldn’t ignore. With any large job, work takes more time and energy than the eventual celebration; but that’s why I am glad that America has designated one day when we make sure to give thanks.

I thank you for reading my blog, being part of my community, and being nice to each other. Thank you. 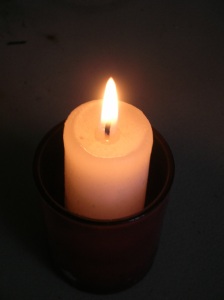