Listen To The Quiet Ones

This week has been a series of fascinating meetings. Only some of them are billable, but every meeting has been interesting. Keep in mind I am easily entertained. Gregarious is good because it is energizing, to a point. Interactive is good because otherwise a meeting becomes a lecture instead of a conversation. Bombasts seem to think they’re in style, though considering what the media covers I can understand why they might think so. And yet, a trend persists. The quiet ones, the people who are economical with their words, and frequently their way of living, are also frequently the ones who heard the most, thought the most, and made the deepest insights. As in meetings, so in the rest of life. The quiet ones are getting a lot done.

Anyone who has been to one of my classes or presentations know that I am happy to talk. My fear of public speaking was obliterated by teaching kids class in karate. They’re a tough audience that you don’t want to turn your back on. When I’m hired as a consultant, I switch from speaking to listening. That comes as a surprise to many, but it is the most effective tool I have for understanding what someone wants to do – and not just what they say they want.

One of my favorite listeners was an expert aerospace engineer at Boeing. He had decades of experience. Sat in the back of the meeting. And listened. He answered if he was called on, but he didn’t seek the stage. He was excellent at the concise summary. He also had a sense of humor. After absorbing a variety of insights, he’d find the core, and in about three sentences state the situation, the assumptions, identify any that were influential but only as nice ideas and wishes, and then describe the most pragmatic solution and action that met most of the needs. He deflated lots of management’s ideological bubbles, and softened it with humor. They didn’t like that, but he was right so often that they had to listen to him.

He’s not the only one. At a meeting a few days ago, several of us were discussing the economic sustainability of communities like Whidbey Island: part-retirement community, part-bedroom community, part-artist community, part-alternative lifestyle community. As we’re seeing throughout the US, housing is becoming less affordable. No state has a minimum wage that supports rent of a reasonable two bedroom apartment. In some places like Seattle, even studio apartments don’t meet the 30% of revenue criterion. Communities are only sustainable if the people who work there can live there. I mentioned tiny houses because I am a fan, but also because I write about them for Curbed Seattle.

It was interesting hearing the conventional perception of tiny start with 800 square feet and the meet resistance when I pointed out that the norm for tiny houses is 128 square feet. The concept that anyone could raise a family in one was dismissed, even though people have been doing that for years. I didn’t press the point because resistance to new ideas can become entrenched when the departure from the norm exceeds a paradigm – regardless of reality.

And then the quiet one spoke.

Amongst a table of impressive people, one with more authority than others quietly interjected that they’d been homeless two years ago. Being homeless resets one’s expectations. Quibbles of square footage are details. A roof, any roof, is a major improvement. That takes care of the rain. Walls provide protection from the wind. A door provides protection from other people. Heat is greatly appreciated, and puts death at a distance. Water from a faucet can feel like a luxury when compared to collecting whatever you can. Being able to piss and poop is something we all must do or die. Add some electricity, and almost all of the comforts of home are available. Square footage is a consequence. All of that can fit in under 128 square feet, but that’s a convenient place to draw the line for reasons too detailed to get into here.

There are more than enough things for us to work on, on Whidbey, in the US, in the world. The bombasts grab the attention; but don’t get nearly as much done as the people who are too busy doing things to get around to telling anyone about it. A group of people on Whidbey already addressed affordable housing, at least for them, by creating a neighborhood of tiny-ish houses. Others are collecting fruit and distributing it to food banks and people in need. Others improve the communication within the community by starting email lists, Facebook groups, and informal gatherings. I’m a peripheral member of at least two member-less unorganized organizations that see something to do with bicycling or dancing and somehow hold classes, memorials, 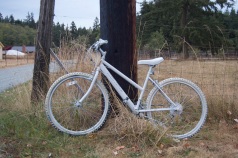 dances, and support sessions simply by deciding to do it, regardless of publicity.

Advocacy is necessary; but for people trying to get something done now, immediately, I suggest finding someone who’s already working on the issue, someone in a similar situation, someone everyone else may be overlooking. They’ll be the quiet ones, and they probably have the most to say – even if it only takes a few sentences.

1 Response to Listen To The Quiet Ones