Knees. My body is reminding me that I have two of them, they aren’t happy, and I shouldn’t be surprised. I have a confession to make. It has been about a year since my last backpacking trip. Please forgive me. I’m asking forgiveness from my self, because I know how much better I feel when I am hiking regularly. Once a year is regular, but too infrequent. As my finances improve, I intend to spend more time past the end of the road. As frugal as hiking is, it is not cheap; but the benefits far outweigh the costs – as long as I can pay my bills.

For those who missed part of my writing career, I wrote a series of three books about Washington’s Cascade Mountains. Each was about what Nature around the lake was like for twelve months. I visited once or twice a month, as conditions permitted, to basically compare wintry Wednesdays with summer Saturdays. Twelve Months at Barclay Lake was about an unofficial temperate rain forest. Twelve Months at Lake Valhalla was at the ridge crest where the lakes can be frozen more often than thawed. Twelve Months at Merritt Lake was past the pass and into the dry terrain where forest fires are too common. Three lakes along one highway create a cross section of nature.

Unfortunately, writing about and taking photographs of nature aren’t enough to pay for the hiking and skiing necessary to take the notes and collect the images. About seven years ago, finances suggested I hike and ski less. Through the Great Recession (or as I call it the Second Depression), I’ve managed about one overnight hike a year. Hiking seems cheap. Throw everything on your back and go for a walk. Sleep on the ground. Drink from a stream. How can that cost money? Permits. Gas. Food. Gear repair. And, the biggie, lost work time. Last year, I wrote about the cost of a two day hike. It was $86. The lost work hours equal about twice that.

And yet, I hiked.

You know it is time to take a break when more than one friend looks at you and says, “You REALLY need a vacation.” Like so many other pieces of advice: “Get a massage”, “See a doctor”, “Treat yourself to something nice”, the advice comes with a frequently forgotten caveat and suffix, “As long as you can pay your bills.” Thanks to an inheritance and an occasional extra gig, I have enough saved up to give myself a day or two off every month through the Autumn.

To my friends who patiently listened to me rescheduling my normal routine and planning the trip, thanks. That went on for more time than it took to pack. Fortunately, oddly, two of my three major clients had hiatuses, and the third was very negotiable. The universe was giving me a hint. I’m learning how to take them.

The trip started off with a dark reminder of the daily grind I left behind. My route took me past Boeing’s plant for the big airplanes, just as the shifts changed. Ugh. Nasty traffic. People desperate to get somewhere else on a Friday afternoon. Bumper-to-bumper for miles. That’s when I smelled the burning plastic. My truck is 16 years old, but I only got it a few years ago. It has smells, sounds, and shakes that I can’t identify. I didn’t see any smoke, but the passenger window no longer would move. A mechanic had thrown an anxiety bone to me by talking about some extra work to do with the drive train or suspension – but they always do that. For miles I couldn’t find a place to pull off and back on to stop and check. I hoped the smell was from someone else’s vehicle. At least my tires were new.

The access road was long, but it had been serviced recently. The trail was only about two miles and less than a thousand foot elevation gain. If you think serviced recently means paved, Ha! They had done impressive work, but the potholes in the gravel road were big and deep enough that taking each slowly became a necessity. The 9.5 miles went slowly, eating into my remaining daylight. My fears of something burning were replaced with fears of something breaking.

When I got to the trailhead, I was relieved, hoped the truck wouldn’t get broken into (which they’d warned me about – more anxiety), and suited up for a hike that was a climb up a muddy and wet trail. My anxieties switched from worrying about truck breakdowns or breakins to Tom breakdowns or breakins. I was out of shape, and glad I hadn’t picked what I would’ve considered a moderate hike just a decade ago. 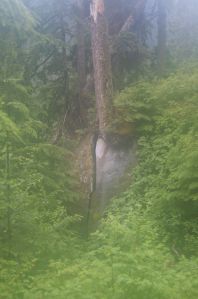 The trail was the transition. I’ve hiked it for decades. It was familiar. I was visiting an old acquaintance who hadn’t changed much, but who had been tended well. Instead of just mud and slick rocks, there were boardwalks and staircases. Many people had done a lot of work. After about an hour of wondering my heart and knees were going to make an ultimate complaint, I got to the lake. There were few photos because the misty air absorbed too much light, but I witnessed its primordial nature. In a bit of manifestation, I asked the world for the first campsite to be open, otherwise I might have to hike to the far end of the lake, another mile or so. There were 17 cars in the lot. The campsites could all be full. Marvelous. The first site was empty, and so were its neighbors. I had solitude on a busy weekend.

The next day was contentment and relaxation. No clocks. No obligations except the fundamentals of eating, drinking, reading, sleeping – and there was even a toilet nearby. Granted, getting to the toilet required climbing over a half dozen fallen trees, but at least it wasn’t over-used! The toilet, by the way, is a simple box over a hole; but, to anyone who has had to dig a trench latrine, it was luxury. I stayed in my tent most of the day because of the bugs. The site provided solitude, but it didn’t provide a breeze and the mosquitoes were hungry.

By the end of the day, I was physically aware of how tense I’ve been and still was, how my variety of gigs means continually evaluating my time, how distant I could be from the basics of life – even while I worked to attain, maintain, and sustain those basics.

Sunday morning I woke with the brightening of the sky. I couldn’t see the Sun, but the day was obviously beginning and I had work to do at home. I broke camp, packed up, and gingerly stepped down the staircases and along the rocks. A twisted ankle could be financially devastating. About 25 years ago I found myself helping a search and rescue squad because someone had stepped wrong, and he was a back country medic. Be careful out there.

Just like the relaxation of a vacation can be erased by passing through airport security, the drive home was done with a perceived wobble in the truck.

There’s probably nothing wrong with the truck or me, aside from our ages. As I said, I write this to chronicle what it is like to live through such economic times. Otherwise, selective amnesia rewrites history.

I know people who won’t hike because they tried it and found it didn’t match the Disney image so many portray. I spend a lot of time looking at my next step. In camp, there’s a lot of time spent providing the basics of shelter, food, water, and hygiene. Trips to the bathroom at midnight aren’t done without a lot of thought. Those are some of the costs.

The benefits far outweigh the costs, at least for me – as long as I can pay my bills. For the last several years, any small upset could’ve maxed out my credit card, effectively totaled my transportation, and had far worse impact than a trip to the shop. When I had more than enough discretionary income, an accident or incident would make me unhappy, but money would solve most problems. Now, I sit in the middle, able to hike, still vulnerable to realities and anxieties that aren’t easily swept away; but able to experience the benefits of being in Nature.

My camera was a bit dodgy and decided to limit how many photos I could take, but I pass along these few to show the large and the small things that made me smile, that took me out of the civilized world, that reminded me of the real world of Nature that civilization happens to sit on top of. 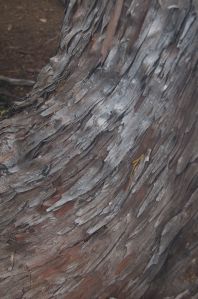 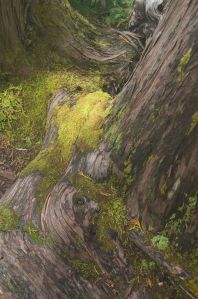 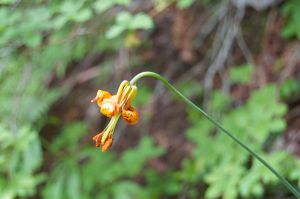 Seventeen thousand years ago, the Puget Sound area was under 3,000 feet of ice. The glaciers retreated, scoured mountains and created lakes. Eventually life filled in as it could; forests in many places, but bare rock persists. Throughout the forest, which started from a few seeds, a wide variety of life lives, even those pesky mosquitoes. Termites will eat the entire forest. Bear, deer, and various cats roam for miles while squirrels ad chipmunks guard far smaller territories. Birds wing throughout. To sit in its midst is a marvelous reminder of what’s important, what I can and can’t control, and what exists even when I am at home typing on the computer. Sure, that slides into the sappy narrative about nature that so many tune out. Maybe they’ll find value somewhere else. I’m simply glad I know where I can find something I value, and find silly when I forget how much it is worth. I look forward to doing more hiking – assuming I can pay my bills. If nothing else, my knees might appreciate some ibuprofen or turmeric.

For the curious, I also posted more practical trail notes over on NWhikers.net.