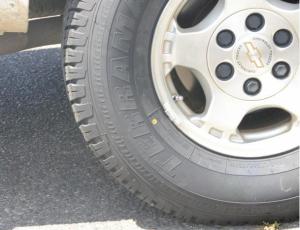 The truck has new tires. Whew. That’s a purchase I’ve delayed as long as possible, without knowing how long was possible. It wasn’t an easy decision to make, but driving around on twelve year old tires can be equally difficult. Some money came in, the swap was made, and now I get to move onto the next decision. Frugality may be about living simply, but it isn’t completely simple.

Gardeners wonder about (and wander about) when to harvest. When are the potatoes ready to pull out of the ground? Ripe berries can come off with a slight tug, but a bit too much of a pull on one may shake off six more that were ready to eat. The longer the figs stay on the tree, the softer and sweeter they get; but the more likely they’ll be found by birds and yellow jackets. Walk through the garden and tug, prod, squeeze, and sniff checking for ripeness. In general, later is sweeter; so, waiting is a good thing.

Mechanical things don’t work that way. The things we make tend to wear down. Even if they aren’t used, materials can degrade, leaks can form, corrosion can progress. One solution is to continually replace everything, but that’s unrealistic except for the uber-rich – and even they won’t be bothered because the rich don’t have any more time than the rest of us. At the other extreme, there’s a solution where everything is used until it is used up. That may make sense with dinner plates, batteries, and windows; but it doesn’t make sense with truck tires. Blowouts happen. Maybe they happen away from traffic along wide roads on sunny days when the spare or the tow truck is readily available; but, a catastrophic flat tire can do more an interrupt a day’s chores.

A few years ago, my Dad gave me an old truck he didn’t need anymore. There were, and are, several things that need repair; but, he was confident that at least the tires were in good shape. He was right. There was plenty of tread. He hadn’t driven the truck much because they had a van, too. It was only after I drove the truck home that I learned that the tires were more than ten years old.

Rubber is amazing stuff, but it wants to degrade. Even if rubber isn’t used, it will degrade from contact with things like ozone and salt. The tread was good enough for me, but webs of hairline cracks were developing on all four tires. The ride got a little wobbly, or at least it felt that way. I was glad to live in a rural area, which meant there were plenty of back roads I could drive slowly, out of the way of traffic. Guests got scenic, slow tours. Every time I had to drive I knew I was wearing more miles off the tires, growing those cracks, and getting closer to a flat or a blow-out.

Worry about every part of a vehicle like and go nuts. Everything may be decaying, but things are remarkably robust, tend to degrade slowly, and frequently outlive the worrier.

My Dad died last September. He had a fascinating life, but he wasn’t financially rich. The average inheritance in America is $177,000. My family’s reality is considerably less. I’ll be glad to pay off some taxes, donate to one of his charities, treat myself to one or some hikes – and buy new tires for the truck.

As soon as I decided to buy new tires I had buyer’s remorse. Surely, they’ll last longer. I have plenty of other things asking for repair or replacement. In the last twelve months, I’ve driven the truck about 300 miles a month. Thanks to my bicycle and the fact that I can work from home, maybe I could repair something else. And then, I would imagine what could happen when a 4,800 pound vehicle is suddenly trying to balance on three tires. I bought the new tires.

Frugality is not about not spending money. Spend a bit now, save a lot later; or don’t have to spend as much for a long time. Most of the choices are guesses. When money is readily available, the optimization suggests taking care of all repairs and maintenance sooner rather than later. When money isn’t readily available, the balancing act and guesswork begins. The tires have been replaced. The ride is smoother. I’m unwinding the anxiety that’s been winding up for months. Things like an alignment, a rear brake seal, the stuck radiator cap, the random fuel gauge, the loose roof console, and whatever else will have to wait. The dent I put in the truck the first time we (the truck and I) disembarked from the ferry, well, that stays. Humility is a useful lesson.

Now that I’m more confident with the truck maybe it’s time to take some of those remaining funds, head to the hardware and garden stores, and load up the bed with wood and dirt. With this year’s nice crop of apples and figs I’m encouraged to make the garden a bit bigger, a bit easier to maintain, and a bit better protected from the other harvesters like deer, bunnies, birds, and slugs. I look forward to anticipation rather than anxiety, to producing something rather than just repairing some thing.