Finally, I can tell yet another of the stories that must remain unspoken. Making less than expenses creates chapters of stories that are either too embarrassing or expensive to reveal. Today, I got my septic tanks pumped. That may sound icky or insignificant to you, but it relieves anxieties I’ve held in for years.

If you’re on a sewer system, congratulations. You enjoy one of the most overlooked luxuries of modern life. Flush at will, and almost always without worry. Whatever went in the bowl is soon flowing under the road and out of your thoughts. Which also explains why so much trash ends up in the treatment facilities; but hey, cleaning that stuff up only raises your taxes, so no big deal. Right?

Living outside the city where toilets typically flush to septic tanks and systems, and know that whatever went in the bowl will soon be beneath the yard. Septic tanks and fields can handle organic material, but they have an impossible time with condoms, handkerchiefs, and whatever falls in when a guest uses the commode during a party. Families must have entire Lego collections under the lawn.

I like being dutiful, sometimes to a fault. About the time of my financial upset, my Triple Whammy, was about the time for the septic’s regular inspection and cleaning. The optimist in me suggested waiting until the finances recovered. The company finances were improving, the economy was going to recover, surely I’d soon get either a better job or a resurgent portfolio. Instead, my finances proved the pessimists right; at least temporarily.

Since then my dirty secret (well, one of them) was that I avoided putting solids in my toilet. About that time, a professional checked the system he suggested I should “get it taken care of” within the next year or so. I was told I couldn’t get the tanks pumped until I had the system inspected, and having the system inspected could reveal repairs that might cost over ten thousand dollars. If you know that every flush brings you one inch closer to paying ten thousand dollars, then you begin to wonder how many inches are left? How full were the tanks? Would the system fail? Would I lose my house because a basic necessity was rendered inoperable?

For the last few years I was creative in my bathroom habits. I began to understand people who have been in worse situations for even longer. Shopping trips were directed to stores with public restrooms. A daily walk would be rerouted to include a rest stop, or at least an acceptable porta-potty. One of the unspoken benefits of coworks was at least a nominally functioning lavatory. I became much more aware of signs for “no public restrooms”, and understood why some people frequent the woods.

But, we don’t speak of those things. We have taboos that we must observe, even when they deal with biological necessities that every living human experiences. Feed the hungry – is only the first half of the process.

I am relieved. The roughly two thousand dollar bill was only possible to pay because of small life insurance policy carried by my recently deceased father. That bit of my inheritance went to pumping out a three-tank system, replacing an air pump, and installing a riser. As odd as that may be, spending the money on my septic system is appropriate because my dad was treasurer for his local sewage authority.

The impacts can be easily dismissed. I can flush. So what? What’s the big deal?

I am not officially poor or in poverty, and yet such a simple thing as a fixed or flawed septic system has unexpected implications. The list must be longer for people who are poorer.

My experiences may seem simultaneously icky and insignificant, but being aware of such basics that are common to every human is something that has made me more aware of the range of human experiences. Millions of people are defecating in fields that are beside their water supply. Around Seattle there are dozens of homes for sale, and therefore probably hundreds of occupied (and empty) homes that have five or more bathrooms; homes where flushing is taken for granted. The exact same processes are in place, yet may be one of the most dramatic examples of the range of wealth within our world.

(This is also why I am encouraged by advances in composting toilets, incinerating toilets (really), and the recycling systems developed for space missions.)

The frugal side of me appreciates the value of simple things. Sometimes those things are so simple that we don’t mention them. I will, however, be silly enough to write about something serious and overlooked (while applauding the Gates Foundation’s work). I will also, regardless of conventions and taboos, quietly celebrate a luxury that is a necessity that I can now employ. I won’t go so far as to say enjoy. 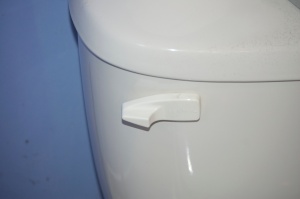 No longer a source of fear

I can flush without fear. Ah.