You are encouraged to consider the following declaration as eccentric. I like program planning. Okay, I’m not going to make it one of my hobbies, but I evidently have a tendency to enjoy hearing about a disparate collection of activities dancing around a goal, and then coming up with a way to line them up so they all head in the same direction. I’ve been told that this is not normal; but hey, it’s what I do. Finding, and accepting, our eccentricities is a great gift that can’t be wrapped, is difficult to deliver, but may be more valuable than anything under the tree. Program planning isn’t as appealing as some of the other things on my wish list, but I am glad to admit that I enjoy solving such puzzles that help people get things done. It may be eccentric, but it may also be a case study in discovering your valuable eccentricities.

I didn’t recognize it until recently. When I look back over decades, I can spot hints and suggestions, episodes and events, that I wished I’d recognized at the time. About ten years ago a friend pointed it out to me, and I thank her.

We were sitting around a kitchen table, a small group working on a new venture. It was fun. Ideas were bouncing around the table, escalating and flying off, then brought back again by more new ideas. Brainstorming (formal or chaotic) makes me think, dream, and smile. After an hour or two I had to leave and catch a ferry. Some schedules will not be ignored. After I got home, I collected my notes, sketched out the various ideas, connected the boxes, and then lined them up. Then, I sent them back to the group. My friend pointed out that it was impressive that I’d caught all of those ideas, and that it was bizarre that I’d sort them into something that made sense – because the meeting certainly hadn’t.

It turns out that I like playing with the little details and the big picture, that I enjoy putting a goal on paper and then figuring out the steps that can get to the goal. To me, that’s natural. To others, that’s bizarre. 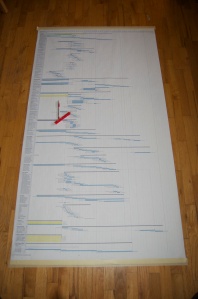 One of the gifts a client gave me was the managerial license to update the program plan for their project. (The History of Computing in Learning and Education Virtual Museum – a project that may appreciate a shorter name.) We built a plan a few years ago. I’ve kept it updated, but it was time for a major overhaul. The plan wasn’t a sketch on paper, but a file that contained dozens of tasks that were linked to each other in a program called TeamworkPM. I may have exceeded its designer’s expectations because the project is large. Preserving, studying, and exhibiting the history of how computers and computing changed the way we teach and learn is an enormous endeavour. Given the right funding it will take about 3 years and – I’m working on the cost estimate, but expect it to exceed one million dollars, maybe three. TeamworkPM is a program designed to manage tasks that fit on a computer screen. The museum’s plan is five feet tall and three feet long. Fortunately, I know a printer who helped me convert a dozen screen shots into one piece of paper that was ready for the red pen.

Pardon the digression into a bit of geeky management, but that’s the point. Some of the most valuable things a person can find are the things that their talents and skills that are uncommon. Evidently, few folks enjoy looking at dozens of tasks, keeping them mind, and then sorting them back out in a useful manner. But then, too few folks know how to engage dozens of five-year-olds and teach them something. Too few folks know how to sit and listen, and only offer advice when asked. Too few folks will step into the uncomfortable moments in life and find a way to comfort someone. And yet, we need kindergarden teachers, counselors, and hospice workers.

I envy counselors that get to spend the day listening to people who are dancing around the blind spot that hides their defining characteristic, and are able to introduce the person to that aspect of themself. I try to do a bit of that with my consulting; otherwise, the consultation isn’t nearly as effective. But, I am no psychoanalyst.

And, that’s the point. Especially, during this week of Christmas, it is easy to focus on things, stuff, boxes and wrapping paper and credit card slips. That’s the tradition (though it didn’t originally include credit cards.) I don’t want to deny some kid the joy of waking Mom and Dad up far before dawn (and only a few hours after Mom and Dad went to sleep.) I don’t want to deny that to the adults, either. But, if you find yourself secretly wanting to do something “nobody” considers fun, but that you enjoy, consider treating yourself and doing it (as long as it is legal and doesn’t hurt anyone, including yourself.)

There’s snow in the mountains, and it’s been years since I skied. I’d like to get back up there, and will. In the meantime, there’s a gratifaction in pulling blackberries at the local Land Trust property, a joy in helping someone with firewood or reaching the top kitchen shelf, fun in hearing some danceable music and dancing wherever – even if it is in the lobby of the bank (video recorded and locked down).

As for those plans, they’re a good idea because they tell you that there’s a least one path that will get you from your dreams to your goal, but the other trick is to remember that life laughs at plans – but you may not be able to take the right next step without them.