Christmas is not supposed to be about money. All that stuff with the money changers and the temple came much later. (Check the Bible for details.) Christmas has become what we’ve decided we want it to be – which means it is a wide variety of things to a very diverse set of people. For me, it is tradition, reflection, and a bit of indulgence. One indulgence is the list of movies I pick from every year. The thing that surprised me as I listed them was how many deal with money. I watch them for their silly, sappy, sweet nature. I like having reasons to smile, no analysis required. Money, however, drives the plot of many; which makes me go, hmm. What treasures are involved?

Christmas is not supposed to be about gifts, either; but those three wise men probably set the tone. Gold, frankincense, and myrrh were not cheap, which is why they were mentioned. A poor couple forced to travel in winter that couldn’t find lodging find shelter with the animals. That’s better than many homeless manage, but not an auspicious beginning. A few days later (as I recall from my readings), great gifts are bestowed upon them. It wasn’t until I reflected on the movies and the money that I began to wonder. What did Joseph and Mary do with the gold, frankincense, and myrrh? Were they treasured forever, or were they expected to exchange them for something they immediately needed, like food and shelter?

Christmas is also about more modern stories. Has any story generated more modern Christmas traditions and icons than A Christmas Carol by Charles Dickens? One of the reasons he wrote it was because his wife was pregnant, again. (They eventually had ten children.) Much of Dickens’ work was about the income and wealth inequalities of the time, much of which is mirrored today. It would be interesting to see which story has more movies associated with it, Joseph and Mary’s, or Scrooge’s.

My short list of holiday movies would probably be longer if I spent an hour browsing imdb.com, for the five that come to mind the easiest are;

There are other movies I traditionally watch: the entire Harry Potter series and the Lord of the Ring trilogy; but they are personal seasonal favorites for personal reasons.

Very few movies remove the influence of money, particularly for a season that is supposed to be about family, friends, emotions, charity, and generosity. The money is there, but that’s not why I watch. I enjoy the relationships, the humor, and of course the happy endings. (The goose may have a different opinion, naturally.)

This will be another very simple Christmas for me, and that’s fine. As I approach sixty, I understand why so many people approaching retirement don’t want more stuff and do want more connection. Hugs are treasures. My financial situation is about the same as this time last year, but the potential is greater; but potential doesn’t buy presents, so I’m doing what I can to make a few things for a few folks. (Gotta get to the Post Office soon.) As I’ve had less, I’ve had to view Christmas differently. What do I really care about? What do I really treasure? How much of what I’ve done in the past was by habit and expectation, but didn’t necessarily truly touch a person? 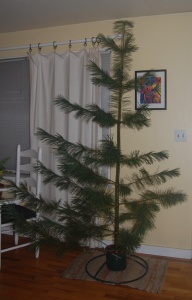 A few traditions remain. I enjoy cooking, so a feast of some sort will occur. I like the lights, and put up a few (and feel sorry for the outdoor tree that died and is simply acting as a scaffold for lights this year.) A few cards have gone out, but at least one less this year because my Dad died a few months ago. Cookies (gluten-free) have been baked, and some are being shipped, and some are definitely only to be consumed in Washington State because one particular ingredient isn’t supposed to cross state lines. The caroling has already commenced on my evening walks. With less than ten days to go, it will be interesting trying to get a tree again. Maybe I’ll do what I’ve done recently, help someone clear a bit of their property by picking a volunteered Charlie Brown tree that would be cut in the spring anyway.