Preparing To Live The Day With MVIS

I’ve witnessed a phenomenon I call, ‘Living the day’. Philosophers will jump in before hearing the rest and say, “Every day should be lived because every day is precious!” Yep. Agreed. A frugal lifestyle daily reinforces the value of every day, every moment. ‘Living the day’ for my investment career has come to describe the key moment when long anticipated news finally arrives, when months, years, or decades of ‘It could happen’ become ‘It’s happening!!!’. In almost forty years of investing (wow, it really is that long, whew) it has happened a few times. I know of a small cadre of investors who wake every morning knowing this could be the day, and who have been denied every day – so far. Is it simply a matter of patience, or will MVIS somehow manage to continue to disappoint?

Set the wayback machine to April 2009. DNDN had a ‘Living the day’ moment. Dendreon received FDA approval for a cancer vaccine. Yes. In case you missed it, the FDA approved a cancer vaccine in 2009. The reason it isn’t widely available for the variety of cancers it can possibly treat is a phenomenal story, one that deflated much of the trust I had in the FDA and the SEC, but that’s another story. For that one day, and for months afterwards, DNDN became a case study in patience and why Long Term Buy and Hold can beat market timing. I mention DNDN more because it was one of the few ‘Living the day’ moments that I chronicled in my first blog (though it was in an early incarnation that was abandoned because the site become so popular that I had to switch to wordpress.)

If you are interested in reliving the emotional ride of a fantastic day in investing, go to that old blog post: “Living The Day“. It is effectively archived (at considerable expense), so don’t be surprised if links don’t work.

For those who want the short version, I’ll summarize. Forget about getting any productive work done. The most I’ve seen a stock go up in one day is 600%, but I didn’t own that one. Frequently enough, I’ve seen 240% in my portfolio. It is common enough, however, that the stock goes up about 140%. DNDN went from $7 to $24 and settled at $17 within a day. That drama was preceded by a rise from about $3 over the previous days. But, rumors never leak ahead of official news, eh? Within a few months it would top out at $55 (at which my Triple Whammy happened, but that’s yet another story.) It was a heady time, and it was vital to have a support network. Success can create as much stress as failure – but stress reduction for good news is easier than when the news is bad.

I waited years for DNDN’s news. If you want to see how confident I was and wasn’t, scroll back through that old blog. Memories are easily edited, but the posts haven’t been changed.

I write about MVIS frequently because it is almost an archetype of a startup. They have an ingenious solution to a complicated and ubiquitous problem in a multi-billion dollar global market – but others and myself feel that the stock is vastly under-appreciated. The concept is simple. Build a mirror on a chip.

Oscillate the mirror. Bounce light off the mirror. Send light out, and create a display that is far lighter, simpler, and more efficient than any flat panel display. Look around your world. How many flat panel displays do you encounter in a day? MicroVision’s technology can’t replace them all, but even 10% of an enormous number is a really big number. Point the mirrors at sensors, and capture images instead of display them. Without getting into the details (many of which I’ve forgotten) the range of applications is smaller, but viable.

MicroVision has been around for about twenty years. I’ve owned MVIS since about 2000. It seemed like a good idea at the time. It has always seemed like it was six to eighteen months away from ‘Living the day’. Evidently, that hasn’t happened – yet.

The window of possibilities for MicroVision’s good news is narrowing. Based on company statements, though with a lot of latitude because of ambiguity, MicroVision is due for at least three major announcements by the end of the year: Sony’s launch of its mobile pico-projector, an innovative smartphone from a Fortune 500 company, and the next generation of products from Celluon. There is also the potential for additional Sony products, automobile head up displays, and as many as four to six companies that quietly displayed MicroVision-enabled products back at CES in January. 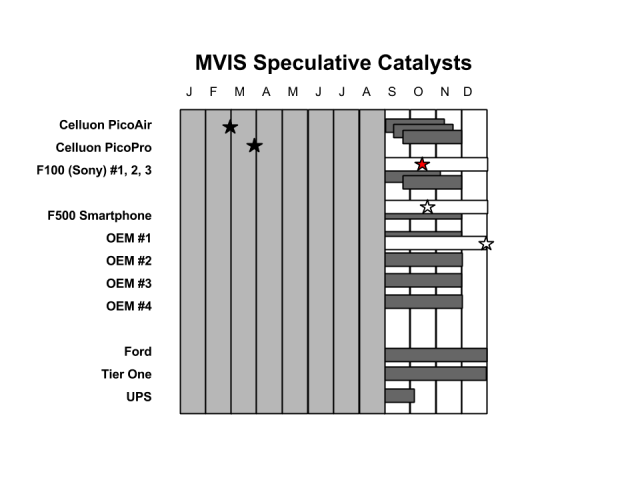 As I type, there is no news, but it could happen even as I post. (That’s the optimist taking control of the keyboard.)

This post isn’t about buying or selling. It is a bit about MVIS. It is more about that support network I mentioned before.

The lesson I want to pass along is more about being human than being an investor. I said it then, and decided it need to be said again.

“Be prepared for The Day. The celebration is easy to fantasize about, but there are more pragmatic aspects to manage. Emotions, trading strategies, and logistics are a few of the the real aspects of The Day. I knew that it was very unlikely that I would actually do anything with my stock. I had decided on my sell target and the size of the position. Part of that was simple personal finance. Part of that was recognition of my risk tolerance. Others sold. They made a profit. That’s a big part of what this is about.

The most important thing to have in place is a network of friends who are in a similar situation. It can be hard, and even impolite, to call up someone at work when your news is that you just made two years living expenses before lunch. They might not have the time and they may resent what sounds like a boast. You have to be able to celebrate with someone and talk over the possibilities and implications within your own life. They will help to ground you and may have insights that are blocked from you by emotion.” – Living The Day

I am fortunate. I have a several close friends who also happen to be invested in MVIS (and that’s been painful enough that other friends were pained by the experience.) I am also reasonably active on three discussion boards devoted to MVIS: The Motley Fool, Investor Village, and Silicon Investor. Knowing that you’re not alone is valuable. It is good to know others who are also going through emotional swings while trying to make potentially life changing decisions. It is just as important to have a support network when there’s good news as when there’s bad news. Whether it is for MVIS, or your lottery tickets, or accolades, it is good to have friends around.

I don’t know if MVIS will have as dramatic a day as DNDN. Consumer electronics don’t have decision dates as dramatic as FDA pronouncements. Even if MVIS gets good news, it may not involve trading halts, or headlines on CNBC. But, the time to prepare for events is before the event. The time to buy the umbrella is before you need it, even when it’s a beach umbrella to lounge under because the Sun is shining so brightly.

4 Responses to Preparing To Live The Day With MVIS