Who Is An Expert

Expert? Me? That’s not a term I use for myself, unless we’re talking about who is an expert at being Tom Trimbath

, and even there I have some suggestions for improvements. Expert is a title some claim for themselves, have the label affixed by other people, or just play with because the idea is so silly. Thanks to the Internet, the term now is applied by data, an automated assessment of reach and impact – or at least so they claim. In this case, ‘they’ are Klout, and their claim about my expertise has me pondering social media, the reputation economy, and the struggle between ego, self-esteem, and skepticism. Welcome to the world where the computer becomes the authority figure.

I’ll put the plug in now for my talk and class next month because it is a direct example of the new world. Allow me to copy and paste from a previous post.
On October 6th, I’ll teach a class in Social Media Marketing for Artists – which has that dreaded work ‘marketing’ in the title, but the topic will be to artists who have a bit more of a business mindset. That will be at the Oak Harbor campus of Skagit Valley College. On October 20th, I’ll give a much shorter (and cheaper) version of the talk at the Mill Creek Library; and that title is even more business-like; Social Media Marketing for Entrepreneurs and Small Businesses.

Do it simply and right and social media is free. Free is great, but you know someone has to pay for the service. Ads make billions of dollars for Facebook. Twitter, LinkedIn, and the rest have a number of ways to make money because you opened an account. Your account is valuable to them, particularly because your account is part of a network, the social aspect of social media. Understanding you, your network, and the entire community mathematically is valuable because the sites can sell the insights to advertisers and companies. Ads aren’t just broadcast like they were in Mad Men. Ads are targeted as niches and individuals. You’ve seen it. Do a search for something on Google, and an ad will show up beside your Facebook page – sometimes at embarrassing times. (One of the perils of consulting about social media is having a search done for one client kick off an ad seen by another client that makes me start backpedaling and explaining without violating client discretion. Oy.)

Want to see what they see? You can’t – usually. There is one feature that shows up occasionally. WolframAlpha.com, a site that is to numbers what Google is to words, will analyze your Facebook activities to a level of detail that is embarrassingly revealing. During one presentation I gave about social media at the local library, one chart showed up, a quick and astute member of the audience noted it, and later with discretion properly guessed what I tended to do at a particular time of day on a particular day every week. Yep. (Thanks for the discretion.) Go to WolframAplha.com. Type in ‘Facebook Report’ and be amazed (though not today because it seems to be broken. Are they having a disagreement?)

Another way to measure your reach is with sites like Klout.com. Instead of just adding up followers on the various sites, Klout measures the impact of your posts. Sure, you may have a lot of followers, but is anyone listening? Are they passing along your posts to their friends and networks? Maybe you have few followers, but what you say reaches far and is shared often. Klout collects the data from several sites. (My account is based on Facebook, Twitter, LinkedIn, Google+, YouTube after I fix the link, and possibly Pinterest.) The score is relative to everyone else. Get a 99 and you’re hanging out with Bill Gates and President Obama. Get a zero and – maybe it’s impossible to get a zero. The lowest I’ve seen was about 20, and that was from someone who just got started. Everyone’s scores bounce around depending on what they’ve posted lately. My score tends to hang out 60 +/- 2. The scale is logarithmic, sort of, so every extra ten points is a factor of ten higher impact. A 70 is ten times more influential than a 60. 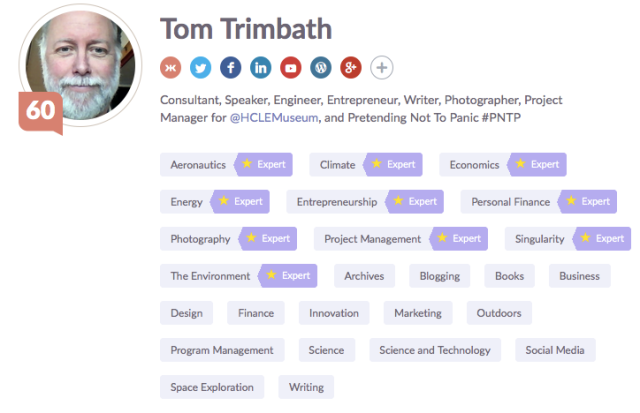 It is enlightening to see which sites have the most reach, which topics have the most impact, and which posts have the deepest engagement. For me, simple posts are best. My photos are appreciated and shared. There are Perks, but that’s another story.

Today, I paid more attention to one of their recent updates. Klout has been listing which topics I am best known for. Sure, this is a bit of nonsense fun to update my profile with some new acknowledgement. LinkedIn has something similar where people nominate other people for their skills and talents, a feature someone called resume whack-a-mole because of the way LinkedIn implemented it. Klout, however, is based on data – no human intervention. The part that intrigued me, and continues to intrigue me is that Klout now also provides the relative score within that topic. I find my results are incredible, as in in- as not and -credible as believable. Am I really within the top:

Then I remembered LinkedIn’s whack-a-mole exercise. Both there and in Klout, I’m listed in so many fields that I’ve maxed out their allowables. When I’m asked to add yet another skill, I have to remove one first. On LinkedIn the skills as ranked by others is:

Pardon me while I pause and reflect a bit, mostly because such an online reputation is encouraging, yet something that is only now being realized within my business.

My reflection, however, isn’t as important as your reflection. Self-doubt and self-proclamation have always warred with ego and self-esteem, especially when resumes and job applications are involved.

Prior to social media, any such claims were more subjective than objective. With social media, such claims are being made objectively – though without any assurance of accuracy. Regardless of your opinion of the accuracy, the reality is that, if you’re online, you’re being measured. That measurement isn’t just the NSA. That measurement is companies, advertisers, politicians, employers, employees, customers, and suppliers – and friends. The reputation economy is here, quietly. The measurements are being made, quietly. The impacts, however, are only now being realized. Sometimes, it may just be a label. Soon, it may mean much more than that.

(Hey, I just realized it had nothing to say about dancing, karate, hiking, … Oh yeah, that’s because there’s a life outside social media. Not everything important happens online.)