There isn’t just one number for the price of tea in China. The only number that matters to me is how much it costs when I buy some. A bunch of prices are bumping around in my head. They’re all connected because the world’s economies are all connected. The price of housing in San Jose, Seattle, and south Whidbey; the price of oil; and the price of the Yuan, China’s currency. For a frugal person who doesn’t need much to get by, I certainly think about money a lot.

Seattle’s housing market is – hmm – bizarre, gonzo, bubbly. Instead of a healthy six months of inventory, there’s 1.18 months. The median time to sell a house has dropped to about nine days. More than half the houses on the market are bought within two weeks. The median price is about a half a million dollars. In the pricier neighborhoods, the number is closer to three-quarters of a million. I’m sure there are some neighborhoods where it’s closer to a million. That’s not the most bizarre part. The Bay area is worse. Median home prices are about a million, and I suspect pricier neighborhoods make that number look small.

South Whidbey’s housing market, not quite the same. Zillow puts the median price at just under $300,000, which is a bit below their estimate for my house. My Make Me Move

price is $325,000. No one’s made an offer yet. I won’t dwell on the consequences until someone makes me the right offer. Houses are starting to sell. Two on my street sold within the last few weeks. Others pop up, but there’s still only about three months of inventory from what I last read. The greatest increase in my net worth has been in an appreciating house value, not from my portfolio and not from working almost every day. (Hey, I took about five days off this year – wait, make that four.)

The price of houses are a bit above and below a million dollars. The other price I’m watching is only a few dollars a gallon. 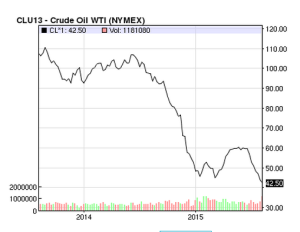 Fracking and the Saudis mean more oil is being produced that usual. Renewable energy is becoming cheaper and easier to use, so people are using less fossil fuels. Supply is up. Demand is down (or at least not growing as quickly.) Prices drop. The major players like OPEC are involved in a price war that is targeted at companies and countries that produce expensive oil like: Russia, Venezuela, even Canada and its oil shale. Recessions are occurring as oil revenues drop in regions that have little else to sell. I’m surprised the local gas price hasn’t dropped by the same proportion.

Even the price of money is changing.

Currencies always have shifting values, but most of us tend not to worry about it much. Retailers near borders or who export and import need to know about such things, but if you’re personal finances are all in one currency, the main thing to watch is inflation or deflation, not currency exchange rates. China, however, has many people worrying because it began adjusting its currency, the Yuan. Maybe it’s nothing. Maybe it’s something. One of the worries is that China’s phenomenal growth economy may have been a bubble instead of a stellar success story. Maybe they’re adjusting the currency to strengthen the economy because other mechanisms aren’t working well enough. A currency that is changed a few percent doesn’t sound as severe as a house price that doubled or an oil price that halved, but when the largest country and one of the largest economies shifts itself a bit, many people worry, and react.

Spend less than you make. Invest the rest. Keep ahead of inflation. Bubbles and busts interrupt those plans because the numbers change dramatically.

A friend passed along a comment made by someone in San Jose. If you want to visit the Bay area, sit still, it is coming to Seattle. The Bay area has become so expensive that people and businesses are moving out, and Seattle is one of the favored destinations. The atmospheric, demographic, geographic, technical, and financial environments are similar enough. The industries driving the growth are key to the Information Age which has proven itself to be much more than a fad. Seattle’s housing booms.

The price of energy, not just oil, is dropping. Falling prices are welcomed by consumers, especially frugal ones. Falling prices, however, worry economists. Inflation can be a threat, but there are many more tools for trying to control it. Maybe the US quantitative easing and the overall debt will eventually trigger high inflation, but the prices of many commodities are falling. Few expected oil to ever come down. After it exceeded $100/barrel, many expected it wouldn’t stop until it exceeded $1,000/barrel. Massive investments, like fracking and drilling in the Arctic, assumed that higher prices would produce higher profits that would pay off the investments. Now, as prices drop, oil industry bankruptcies are expected to rise. Falling prices are central to deflation, there are fewer tools to control it, and those tools work best when interest rates are high – which they aren’t.

China has been producing significant wealth, an interesting result from a communist country. Some of the wealth is looking to leave the country, and one way it does so is by buying real estate. The west coast of North America already has a large Pacific Rim culture, so buying in places like Seattle is buying into a comfort zone, whether the properties are occupied or not.

China is also worrying economists, financiers, and many others because of the possibility that they are in a bubble that is bursting. Chinese citizens may also be worried, and worries are another reason to move money out of the country.

Influences that are usually inconsequential to most people are bumping into my considerations. What’s going to happen to the global economy? Are we about to watch another bubble pop, just like in 2008, 2000, and before? Are we about to enter into deflation, something I’ve never experienced but have considered and then felt myself shudder? Are we about to enter a period when expenses are down, pollution is down, excesses are moderated, and wealth becomes more distributed?

I don’t know. (Yeah, I probably should’ve said that at the top.)

What I do know is that, with all these phenomenal influences jostling each other, my best response is to keep working, continue investing, live frugally, and remain open to opportunity. Who knows? Maybe someone from Harbin will come over and make me a full-price, no inspection, sight-unseen offer for my house. Hey, it could happen.

In the meantime, while a rare storm blew through on this August afternoon, I sat and sipped a cup of tea while enjoying the play of massive forces that did nothing more than make a lot of noise, water the lawn, and give me an excuse to put aside work so the lightning wouldn’t fry my computer.

(The Drum Mountain White Cloud I just bought from Dandelion Botanical cost $3.25/ounce, some of which was shipping fuel costs from China to Ballard with a bit of profit included. The tea was fine. Glad I took the time to enjoy the show.)