Boom. The Seattle area has been one of the driest in the country since the beginning of May. We’ve had less than one inch of rain in more than two months. That isn’t normal. The temperature is near 90, and that’s on the island where it is cooler. 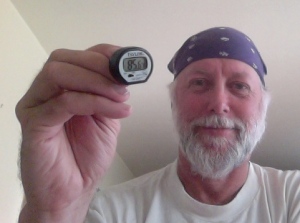 I feel sorry for people trapped in the concrete oven that is any urban metropolis during a heat wave. Folks ask, how do you put up with it? Answer, you do. I get the same question about personal finances. I give the same answer. I do what I can, and hope no one else does anything that will make it worse. We’re in a Red Flag Warning from the National Weather Service. Fireworks are discouraged. Those booms are from people who either don’t know better, or don’t care. What will I do? I’ll do what I can.

Welcome to the Fourth of July on Whidbey Island, a place where people go to get away from the rules of the rest of their lives. For ten months out of the year the island is quiet. Then, July and August hit. Part-timers and tourists spend hours in the ferry line waiting to come over. Collectively, they bring tons of explosives to the island and celebrate its peacefulness and natural wonders by setting off explosions and scattering the naturally wild life. With the island drier than ever for this time of year, it is also prone to fire. Yesterday afternoon, we had the biggest fire in decades. Luckily, no one was physically injured, but there was undoubtedly an emotional toll on the people who had to evacuate.

What will I do? The same thing I do every year. My house is surrounded by vacant lots of dry grass. Every evening, even during this drought, I water the fence, the fenceline, and the roof. I fill a bucket or two. I position ladders for quick climbs up onto the roof. I keep welding gloves and safety eye shields handy. And, I stay home, guarding my home. Many of us have tried advocacy, but the elected officials tell us that the rights of the businesses are more important than the rights of the residents.

I’m one of the lucky ones. My neighborhood hosts a professional fireworks display every year. I like fireworks, legal fireworks, especially legal fireworks that are shot out over water. The fish, crabs, and clams may not like it, but at least water doesn’t burn here. I’m also one of the lucky ones because these last two years have been quieter. A few extra teenagers growing up and moving out leaves parents who don’t seem to have the same enthusiasm. The night is yet to begin. We’ll see how it goes.

I’m one of the lucky ones. My finances are troubled, but as I pointed out recently, I may have finally retained the label of middle class – barely. My net worth is above the median, which means it is positive. My income is at the lower threshold for middle class. And yet, I can’t pay all of my bills. Frequently I’ve been asked how I manage my money and how I manage my attitude. (ed: a real time fireworks boom just went off – might as well record them) The answer is similar (boom) to the fireworks; a bit of advocacy, taking control of what I can control, and hoping no one does something negatively disruptive.

My lifestyle is frugal, and resourceful. My luxuries are mainly a dance every week or so. I work as much as I can. I continue to look for better opportunities, and continue to wait on the ones that have suggested themselves but haven’t made commitments yet. I drive as little as possible. Bicycle when feasible. Rarely eat out, except for expediency. And, generally, hold off on anything that costs money. In the meantime, I hope that larger economic developments are positive, while being very aware of the great swath of negative possibilities.

While I’m herding my money back into something resembling order, I’m also aware of China’s collapsing markets, Greece’s debt impact on the European Union, Argentina’s and Puerto Rico’s debt issues, the threat of deflation, and economic instabilities in private equities and income inequalities. The last time some of these and similar issues hit the news was just prior to the Internet Bubble (boom, boom, boom, boom, boom, boom, boom, boom) and The Great Recession. What will I do? I’ll do what I can with the money I have and the options available. (boom) Most of my plans will remain dammed.

It is the evening of the Fourth of July. The evening of the Third of July is actually the bigger event on the island. The official fireworks displays are impressive, and held one day early so people can then head into Seattle for the bigger shows. And yet, unofficial fireworks will happen because some people left Seattle for the very reason of being able to set them off. The Burn Ban does not deter everyone, as if it didn’t apply to everyone.

There was no dilemma over my choice of staying home. I maintain my attitude by concentrating on what I can do. (boom, pop) Rather than bemoan the long list of things I might prefer to do, except for longing for the mountains, I pick from what I have available. (boom) The only way to protect the house is to stay at the house. That’s good, because it doesn’t cost anything. Dinner was a simple choice, a garden salad with lettuce from a friend, chicken from a few days ago, and a dressing that was about due. Put some chips beside it and wash it down with a vodka and lime tonic; and the dining is no longer a concession. No cooking involved! As for entertainment, in this heat, there isn’t much interest in anything aerobic – at least now that I got my run in for the day. Writing is entertaining, doesn’t cost anything, and can be very freeing on a night when it is doubtful that anyone will be reading it. (boom)

(pop) There is little dilemma over my money choices. Some of my friends who are overwhelmed when they try to understand my situation are burdened with the anxieties and complexities of their money. They don’t feel secure, for good reasons like not having enough to retire despite being near sixty; but, when they try to decide what to do, they have so many options that they retreat from the task. One reason my situation is easier is that, now that I have lived with so little for so long, I’ve had my priorities, luxuries, necessities, (crack, boom, boom) abilities, and resourcefulness tested. I’ve just been through a training ground in (pop, boom) what matters to me, what is the minimum society expects from me (pop, crack, boom), and what society thinks I should do that makes no sense at all. (boom, crack)

Sunset approaches (boom) the incidence of fireworks, (crack) which are probably illegal to reach these volumes, increases. I’ll publish this post, then reinforce my defenses and hope no one starts a fire. Tomorrow, maybe I’ll check my finances, pay (boom) a few bills, and hope that finance ministers (boom) around the world don’t do anything drastic or illegal, either. (crack) (boom) (crack) (whoomp) (crackle) (whoomp)

6 Responses to Finances And Fireworks