Surprising things happen when I have to put something sweet aside. Or maybe I’m just easily entertained.

What a way to spend a gorgeous day – inside on the computer. Oh well, so it goes, especially when there’s work to do inside and a hay fever onslaught outside. I took the time to create the first draft of my semi-annual exercise, my review of my portfolio that I create and post every six months. It is a bit of due diligence that doesn’t take much effort (unless you’re sneezing every few minutes), but that I find valuable for any stock I hold for more than a year; and I tend to hold my stocks for years, and sometimes decades. (Details in my book, Dream. Invest. Live.

Every six months I conduct the exercise recommended by Peter Lynch: explain every investment I own in simple terms – then see if the story has changed from last time. Day traders can skip this step. Long-term-buy-and-holders like me can witness stories unfold, for better or worse. Lately, it’s been worse, but it may be getting better.

This time I added an extra layer to my most visible stock, MVIS. About eight years ago I added an extra line to the synopses I wrote; I included the market cap of the stock. The market capitalization is simple enough; it is the price of the stock multiplied by the number of shares. The answer is a valuation of the company. Most folks are familiar with stock prices going up and down, but many don’t know that the number of shares changes too. Dilutions, mergers and acquisitions, and stock splits change the number of shares available. Only the rare, and very strategic companies like Berkshire Hathaway rarely change the number of shares in the company, which is why it trades at $212,199,91. Most do it to keep the share price ‘affordable’ as the company grows, but it also shifts as shares are handed out to employees, or used as part of business deals. If you had one share of Microsoft stock when it went public, you’d now have 288 shares. Conversely, if the stock had never split, that one share would be worth $13,276.80 instead of the quoted price of $46.10.

I track the market cap of all my stocks because it is the easiest way to see if the company is progressing, even if the stock isn’t. MicroVision seems like it is progressing, yet the stock doesn’t seem to reflect that. That was my feeling, but when it comes to investments I like to judge based on data when reasonable. The results surprised me. 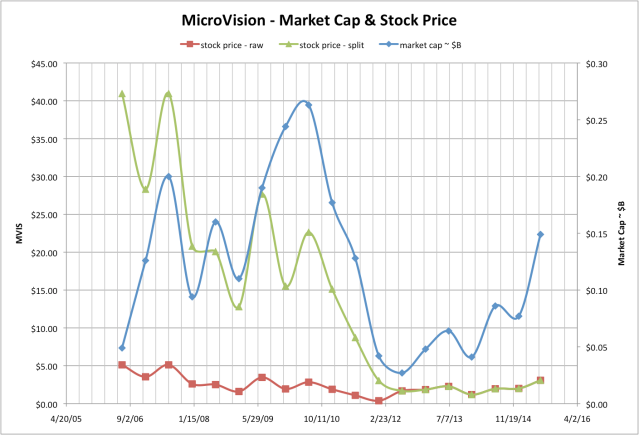 At my six month checkups, MVIS hasn’t been above $6 since I’ve tracked the numbers in 2006. Its high was barely above $5 and its low was below $1. There was a 1:8 reverse split in early 2012, so if you look back online you’ll see a high eight times higher, just above $40. That looks dismal. It feels that way too, because I’ve been buying MVIS since 2000 and have shares at the equivalent of $56. That’s tough medicine from a regular exercise for a stock that traded on Friday at $3.08. The quoted stock price has been low, but constrained, compared to the price with the splits included. Neither line on the chart is encouraging.

The market cap tells a different story. The market cap shows a company that had a turbulent past, but was progressing until about 2010 when it released its first serious product; and then a slide as the suppliers and startup inefficiencies undermined their success. Then, just after the reverse stock split, the company’s market cap begins a climb. It isn’t monotonically increasing, but it is headed in the right direction and accelerating. The introduction of one of the customer’s products,

and the news from a Fortune 100 company are encouraging.

Investing is like many human endeavours; it makes sense to understand the motivations and compensations involved. It also makes sense to remember that there is more than one way to measure most things, including companies and stocks. I’m glad to see MicroVision’s progress, but must live my life according to the progress of MVIS – at least that aspect that is invested in MVIS as a means to improve my personal finances.

Now, it is time to step away from the computer, hope the winds have died enough to still the pollen, and sit outside as the sun sets. Investing may have taken up most of today, but it should never take up the entire day, even when it is part of a good, and regular exercise.