Spring is here. Time to put away the turtlenecks and sweaters and lose enough weight to fit back into my shorts. We’re one season and almost three months into 2015. As one commenter put it, calling $MVIS’ recent action ‘distracting’ is a gross understatement. The weather around Seattle turned warmer than usual, but we knew the season was coming. MicroVision’s spring has been anticipated for what feels like a small Ice Age, and now that we’ve seen the first cracks in the ice, we may see sudden spurts of latent growth. In the last month, MVIS has risen 85% and at its peak it had more than doubled. If only one news item was expected and delivered, then that would be enough for a while. There are good reasons to believe, however, that other catalysts will sprout up by the end of the year, which is closer every day.

Small companies move on news. An $8,000,000 order followed by a $14,500,000 order for MicroVision may have encouraged MVIS to rise 100%, but the same amount wouldn’t budge a company like Sony. Buying and holding stocks in small startups can be exercises in impressive patience, unless you buy in just before the pop as some lucky folks manage. Timing such events is difficult. I’ve held MVIS for 15 years, and have expected such pops several times, and been wrong. This time feels different.

MicroVision press releases, conference calls, and stockholder meetings have left me with the impression that management expects at least a few more catalysts this year. Catalysts can be anything: a favorable mention in social media, a product launch, earnings reports, etc. Each catalyst is an opportunity for analysts and investors to re-evaluate the company and re-value the stock. Speculation about the results attracts traders who swing the price around within the first few hours or days, but it is the research results from the larger institutions that eventually set new price targets for the stock. The sudden rise in MVIS faded a bit as the traders entered and left the arena; and now we wait to see what the major investors think.

The company has already announced revenues that exceed all previous years, if those revenues were to all arrive this year. Enough of them should to set a company record. Maybe that makes the company cash-flow positive; and maybe not. MicroVision is working with more than one customer, and some of them are expected to announce other products this year. Even the customer that has paid $22,500,000 can create additional catalysts when they launch their products. And then, there are the customers that are secret and surprising. Few if any expected Celluon to launch the first products of 2015, but the PicoAir

is already available and the PicoPro should be available soon. They expressed an intent to launch more products. There may be another customer or two or more who are just as secretive. And then, of course, the hints and suggestions may become no more than words, as has been the previous history at MicroVision.

Here is my collection of speculative customers and catalysts, and speculations about their possible announcements.

There speculation is layered on speculation to the point that I won’t even speculate except to give them a place on the chart.

The chart. I decided to graphically represent the possibilities. This is crude, and is meant more as a source of discussion than prediction. I look forward to improved versions from people who are better at reading MicroVision’s tea leaves. 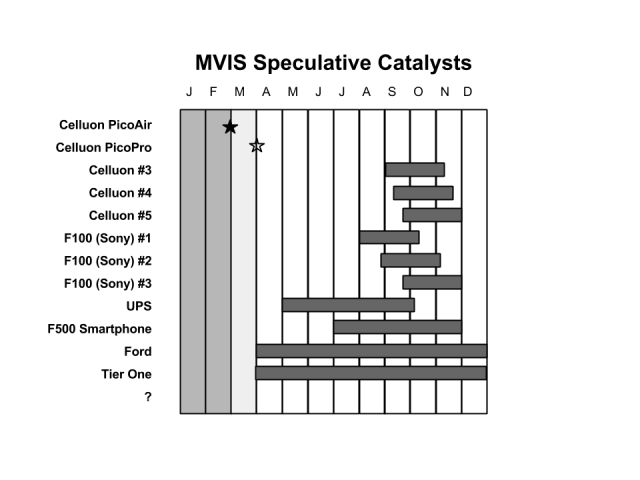 The one message I get from the chart is the matter of timing. Of the twelve months, two are gone, another is mostly gone, and the last one may be too late for most customers. That leaves a significant number of catalysts within a bit more than 8 months. Add in the company events like earnings reports and the stockholders meeting. As we get closer to 2016, add in news releases about 2016 products. Put them all together and I see the potential for many more events like the one MVIS shareholders just experienced. If revenues were solely dependent on component sales, then I’d be concerned about resource limits; but MicroVision’s business model also includes licensing, royalties, and support services.

Such potential can be hard to accept, especially considering MicroVision’s history. MVIS is a story stock, which also means that rational valuations may not mean as much as market psychology. In retrospect, the stock may be seen as being undervalued. It is just as possible that it can be overvalued. That debate has already begun. From what I see in MicroVision’s possibilities for 2015, that debate doesn’t look like it is going to end soon. Maybe by this winter shareholders will have learned that what sprouted in the spring wasn’t an annual, but an evergreen.