A Lot Of Bland Versus A Bit Of Awesome

Frugal is mistaken for cheap. Frugal is realizing that a bit of awesome is much better than a lot of bland, and costs a lot less too. Tiny houses are getting busy. They were ignored, and then laughed at, and are approaching the point where they meet the fight. Do people’s needs and wants break through and past convention and regulation? I don’t know who will win, but the energies are building on both sides. Good.

I’ve long been a fan of tiny houses and frugal choices; but, I didn’t start out that way.

I made some of the conventional choices because it seemed like the right thing to do, there was a lot of encouragement to conform, and the pervasive message was buy big and grow. It was an easy comfort zone to settle into because there were so many other people there. I bought the biggest house I could afford, barely had any money left over for the first few years, sold it at a moderate gain to get married, bought a bigger house, sold it, tried a condo, bought a bigger house, got a divorce, and then re-evaluated everything. The divorce had nothing to do with the house; but as others who have been through the process can attest, divorces inspire intense introspection and retrospection – or fascinating denial. I like to think I opted for the internal inspections.

The first place I rented was smaller than any of my previous houses. The next rental was smaller. Then I bought a house. Unfortunately, I bought it at the peak (and sold stock that has since risen six-fold, FFIV). Fortunately, I bought a small, though not a tiny house. At 868 square feet (according to Zillow), it is the smallest house I’ve owned. It is also the only one that has felt like home. And, I only need about two-thirds of it.

It was saddening to look back on the houses I bought because of other people’s opinions. Ah, but I was young, and when you’re young it is hard to hear your own voice – or at least it was for me. That advice had me carry far too much debt, put far too much money into interest payments instead of investments, and far too much time into maintaining a major asset when I lacked the proper skills. I still lack handyman skills, but at least the consequence is proportionally smaller.

For the last week in February I had fun writing about tiny houses. Other people are reaching similar conclusions about conventional wisdom. Curbed.com had Micro Week, a week devoted to everything tiny in real estate. I’m an contributing writer, so I got to contribute stories about tiny house builders and tiny houses that are for sale. Relative to the rest of the real estate market, tiny houses are inconsequential – at least from the perception of the conventional housing industry.

The economic situation has changed significantly for anyone who isn’t retired or well protected by a stable job. For many people, the Great Recession was the unexpected divorce from the old economy. Even if they found new jobs or started new businesses, they had to challenge conventional wisdom because the old wisdom wasn’t working. Stable employment was gone. Ratcheting social and economic status slipped several teeth without warning. Income wasn’t certain. Debt was too big of a threat. The wrong side of leveraging became apparent. Introspection and retrospection changed perception.

Tiny houses appeal because, for about the price of a new car, people can own a home debt-free. The concession may be that they have to live in one-tenth the space, but the greater benefit is the release from conventional pressures.

Without the constraints of well-established tradition, people are being creative about how they want to live. Many identify tiny houses with Jay Shafer’s Tumbleweed Homes, high-quality wood construction, of houses that fit on trailers. The trailer limits the size of the houses to about 128 square feet; but the trailer and the size allows the houses to be considered RVs, which gets them past housing regulators. Seattle has its own Tiny House builders. Others are taking that same idea and getting creative with curved roofs and walls, because if you’re going to be different, be different. Others are finding a middle ground, building pre-fab houses that are small, not tiny, but also more likely to be accepted by the neighbors. Others skip the wood and peaked roof and repurpose modern shipping containers. If they’re strong enough to survive a hurricane at sea aboard ship, they should do fine on land. They may be metal boxes, but creativity softens that. And then there are the people who realize that 3,000 square foot houses are an aberration, so they rewind the historical clock to the nomads and find places for yurts and teepees. Settler’s cabins were rarely very large, and today’s tiny house owners are settling a new society.

Bigger can be better, but a lot of the bigness was built for show. Even for people who aren’t ostentatious, the majority of housing choices far exceed their needs, ignore their wants, impose designer’s wants, and commit owners to mortgages that measure debt in major fractions of a million dollars. The only way to fill such a house is to limit creativity or maximize debt.

The tiny house crowd has caught onto the positive self-reinforcing cycle of understanding the true basic needs for as little as possible. Today’s society and technology has made that much more attainable. Then, with the basics achieved, any surplus can be used for luxuries. High-end appliances, excellent materials, functional art instead of cheap furnishings with a few flourishes. Some tinies are shacks, because poverty is too pervasive; but the reason tinies are becoming popular is because people realize that being debt free allows them to free their expression and individuality. 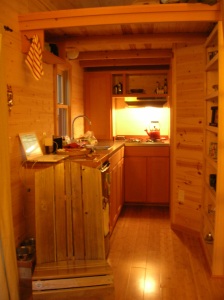 According to Zillow, my house is finally worth what I paid for it eight years ago. That’s an effective interest rate of zero, and actually negative considering the expenses. I’ll probably stay here because the view is hard to beat, I don’t have enough to buy land, and the regulators are still fighting the innovators while defending an anachronistic standard. 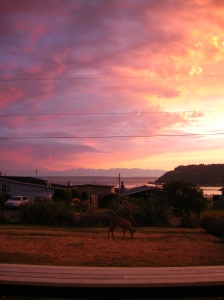 The people who are building tiny houses, living in them, and then engaging in the battle for the right to live in a house of their choice are basically the beginning of a housing rights movement, a movement that recognizes that the old attitudes no longer make sense. They’ve learned that a big box of bland paid for with debt is bizarre compared with totally owning a tiny bit of awesome.

PS If you happen to live on Whidbey, there’s an impressive development that is welcoming tiny homes. Check out Upper Langley.