My Money And My Life – Breakout

We whacked weeds, pulled old fencing out of bushes, posted some signs, and generally played around in our grubbies in the name of charitable land preservation. It is how I decided to spend a morning, and I didn’t even get paid. I’m one of the site stewards for a land trust property. It is something I do that makes my life a bit better by making my neighborhood a bit better, so I guess I was or will be paid. Sometimes it is the little events that don’t take much time, but that affect your life, that make it worth a temporary shuffling of a schedule. I did that in blackberry bushes on Friday. I also followed my own advice from the previous post and spent some time in the neighborhood of my personal finances. A bit of life spent as time taught me something about wealth and money.

Allow me to disabuse any grandiose notion of my role as site steward. The other steward does a lot more work and lives almost an hour away. I think they gave me the role because I can walk there in twenty minutes, and have to drive past the property to get out of my neighborhood. He’s useful and constructive, planting trees, getting a bridge built, organizing fence parties. I’m more convenient, will work on the constructive side, but I’m more likely to lead the charge against invasive plants. Destroy! Exterminate! (Maybe we should hire a Dalek.)

Hammons Preserve is a small farm that was passed on to the Whidbey Camano Land Trust so people can sit and find a bit of peace. It is also one of the few places to see Cultus Bay, an fertile and active tidal bay with a view of the Olympics and that has shores that shift by at least a kilometer between high and low tide. By putting the property in trust the land was saved from probably becoming a housing development or a MacMansion estate. Farms are fertile. That also means invasive plants are happy to move in and take over. Our work parties alternate between destruction (tearing out the invasives) and construction (planting native species) and then more defense against the invasives until the natives are healthy enough to take over.

Trust me, the Olympics are right there, behind the clouds.

At the start, there were truckloads of old farm garbage. After that was carted away we covered the fresh dirt with mulch and weed barriers and started planting cedars, willows, grasses, and more types than I can recall. I spend more time with the weeds, remember? Those invasives are blackberry, english ivy, holly, canadian thistle, and scotch broom. We’re there about once a month. They work every day, but so do the natives. We are making progress. 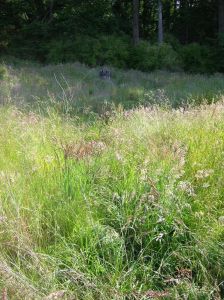 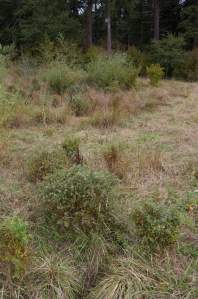 Motivations differ, but at the last work party a thought came to mind. Aside from the long term goal of preserving the land, volunteers find personal short term reasons to help. The things we do for charity are the things farmers would do out of necessity. A Friday morning in grubbies is worth a celebration, but a farmer spends decades viewing much of it as just more work. If the farmer worked the land for decades, then the farmer found a sustainable lifestyle. Volunteers measure time and effort differently. A sense of gratification comes from knowing your work has helped at least in some way.

I felt rich – and anyone who’s been stalwart enough to read my financial story knows that I have far less money than even a few years ago.

That’s when the flash of insight hit. There are people who are working hard every day who, at the end of the day, can’t get clean, damaged their clothes, won’t have enough to eat or drink, and have to let vital tasks go undone because they don’t have the resources or equipment.

There’s a poverty line defined by the government based on income. I found a new line, while doing work for free even though I had to make up the money and time somehow.

In my previous post I exhorted folks to celebrate taking any small step in advancing their personal finances. Doing something is better than just talking about it. So, before I went to bed (actually couch), I opened up the Nine Step Program Guide and tasked myself with reading at least a page. Well, the first few pages are titles and copyrights; so I skipped to page 4 and ran into a list of questions. Mostly they were about money, and reminded me of how I’ve had enough and now do not. I was about to answer them as quickly as possible rather than dwell on my misfortune but I came across this one;
“If you were to die in the next few years, would you be comfortable with your legacy or contribution to your family, your community, the world?”
Yes. The answer came so quickly that I hit rewind in my brain and asked myself the question again. Yes. Despite my current situation, I am comfortable with what I’ve done and how I’ve acted – for the most part. I am human, so inevitably, mistakes were made. I beg your pardon. Accept my apologies. But the balance remains. And, no, I don’t feel like replaying my entire life within a blog; but I do appreciate the question and the answer and the level of confidence I have with it. (Want to know more of the story? I have over a million words published in books, articles, and posts. Check my bio. Read on.) Whether anyone agrees with me or not, the question is in the Guide because it is a question we should each ask ourselves. What’s your answer?