I freelance and I work with others. That’s sounds contradictory, and that’s okay. My business is ideally in consulting, which is very collaborative and fascinating; but circumstances and opportunities mean I am freelancing as much as I am consulting and as much as I am doing other things. What do I do? A little bit of a lot of things. Why do I do it? Because I must. Why do they do it? They’re in the same situation. Who are they? They are the workforce of the new economy, and a group of us work from the same office, a co-work space in downtown Langley. It wasn’t conventional, is becoming more common, and is redefining work and finances.

My business is nothing new. Several years ago, back when I was temporarily semi-retired, I started up Trimbath Creative Enterprises to manage the books I’ve written, the photos

I sell, and the occasional consulting or teaching gig. I hoped to be fully retired, but I knew nothing is guaranteed and a bit of preparation made for a better backup plan. Besides, retired or not, making a few extra dollars is handy. Most of you know the story: Triple Whammy, fighting to keep my home, building my business, and recently arriving at a modified mortgage – I think.

My passion is for people and ideas, so of course I enjoy consulting. Consulting though, is not ideal for steady income and quieting the concerns of mortgage companies. As it turns out, spreading the word about consulting has led to my role as project manager for a virtual museum, which oddly inspired the role as Information Manager for New Road Map, which is extra inspiration to help folks with the social media campaigns and self-publishing projects. It is a varied existence, and an example of the new way of work for many people.

Today I worked from home. That is much easier now that the threat of foreclosure has dramatically diminished. (Believe it or not, that story continues.) In sprints of an hour or two I’ve written supplemental material for a magazine, worked on the museum, disseminated frugality news, researched aerospace electronics, and wrote an article about real estate. I’m looking forward to hearing back from the three local businesses that are working on their plans, and two manuscripts I’ll get to proofread. The IRS has a pesky little box asking for the purpose of the business. One word does not suffice unless it is survival.

No, I didn’t work from my pajamas. But no, I also didn’t have to put on a suit and tie, and I didn’t have to commute more than twelve feet. It has been a gorgeous summer day. I’ve looked at it frequently, though my stiff neck suggests I stared at the computer far more. The only interruptions have been self-induced. I’ve only had a conversation with one person today, a neighbor whose house is unfortunately up for sale. Except for him (and a person asking for directions) every contact has been through email, Facebook, and Twitter. A wide array of verbal communication skills don’t get used.

I also work from my office. Well, it isn’t my office; it is a co-work space where there are five chairs, windows, a long counter around the edge of the room, and anywhere from none, to one, to the rare event of too many of us sharing a space. In general though, there are more chairs than people and a fair amount of silence. Co-work spaces are becoming more common because more people are working as I do: a variety of tasks, none of which require constant personal contact, many of which are remote, all of which benefit greatly from good Internet service and a lack of espresso machine noise. Most of the time we are heads down, bowing to our laptops, usually with earbuds in, making little noises as we unconsciously shift in our seats or sip from our cups.

There’s very little need for anything else in the room. We’re over a breakfast and lunch restaurant, The Braeburn, that tempts us with wafts of bacon in the morning. Half the windows face Useless Bay Coffee Company, which catches our attention with the aroma of coffee beans roasting onsite. Out the other windows is South Whidbey Commons, which is run by and for the local students, which also means it has a livelier vibe as school lets out. 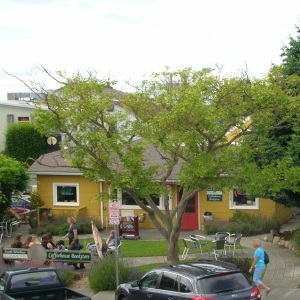 Those of us using Langley Coworks don’t just sit there and ignore each other. Inevitably, people take breaks, commiserate, organize happy hours, and generally be social humans; something that is harder to do if working at home alone. There’s also the shared venting when someone loses a file, a client or customer does something bizarre, or a deal falls through. The good news is that deals also arise. Innovation and networking commence. That article about real estate that I mentioned above is the result of one of the folks needing some help as his workload increases. I now have a gig writing for Curbed Seattle. It’s conceivable that person A could be helping person B who is helping person C who is helping person A.

Coworks are for digital nomads, a population that is growing. It is also a population that no longer has to live where the cost of living is high. Places like Whidbey Island are a mix of expensive and affordable. It is easy to imagine a house with my view on the mainland costing at least a hundred thousand more. At the same time, small towns need new people. There’s even a kickstarter campaign to draw more digital nomads to Whidbey, Why Not Whidbey? The same idea can work for lots of places, freshening populations that are in the midst of generational shifts.

Our society will always have people in farming, medicine, the basic hands-on services required by civilized life. Increasingly though, the single careers that shaped our cities are shifting as multiple jobs and geographies become disconnected. Old rules don’t necessarily apply. At the co-works, we dress on the casual side of office casual; which is handy because all of us except one bicycle commute on occasion. The only person that doesn’t is the only person whose work is tied to the island, the co-manager Christina Moats. She’s proof that there will always be people tied to an area and for a good reason; she’s a real estate agent.

It has been a long day, as are most while I recover from my financial upset. As I typed this post though, I was reminded of why I also like working from home. The view from my house as the sun set. No commute. And a glass of wine, readily at hand after I hit Publish. That certainly is not the way my days ended when I worked from a cubicle. Welcome to slice of a newer and freer life.