It is August and summer. Time to fix fences broken in December and winter – in 2011. Personal economic recoveries only happen overnight with a different kind of windfall. I believe in such things, and hoped my friend’s news of inheriting $2,501,981.89 wasn’t a scam or a bit of spam. Alas. Recoveries happen, but rarely return to exactly where they started. The stock markets hit new highs. Unemployment has dropped. Interest rates remain low. I have a new fence that isn’t as nice as the one that fell, but it may be good enough to keep out the deer. I celebrated.

December 2011. The NASDAQ was just coming back up through 2,500 after bottoming below 1,500. The S&P 500 was rising past 1,200 after bottoming below 800. Unemployment was at 8.5%. Yay! We were three years past the drop, had a long way to go, and it was taking too long. I was searching for a job, selling off my savings, and scrambling for business. And then the winter wind caught a source of spring flowers and tore down my fence. The cute, rapacious deer walked through the new entrance and enjoyed feasting on my garden. The government couldn’t decide whether to spend money or not on its own programs, unless it was for “defense”. I knew I couldn’t fix the fence because I could barely afford – well – anything.

This series of posts are about my personal financial recovery, the messy phase of a person’s life that is usually avoided in stories because it isn’t the readily recognized events like finding a job or getting a new mortgage. And yet, the smaller, more subtle events sometimes invoke the strongest feelings and the biggest celebrations.

We’re in a messy part of our recovery. The NASDAQ is over 4,400. The S&P plays with 2,000. Unemployment is down to an almost reasonable 6.2%. Interest rates are so low that my modified mortgage is at 2% capped at just over 4%. The messy part is that the markets are up, but not for all stocks. If you’re one of the unemployed the unemployment rate is 100%; and many who are unemployed aren’t even counted because they’ve been out of a job for too long. Interest rates are low, but gas prices suggest an inflation rate of 4.5%, not 2.1%. I do seem to recall a time when corn cost $1/10 ears rather than $5/3 ears.

Fixing my fence was not the top priority for my house, except that it was the biggest project I could accomplish for the least money. The old fence was the standard of suburbia: 4×4 posts, 2×4 beams, a nearly solid wall of thin wooden slats. Very stout and opaque, when built right. For some reason, when the fence company built it for the previous owner, they didn’t actually nail in the beams. Probably a cost savings, or a profit improvement, or a mistake. Hey, mistakes happen. When I was unsure about keeping the house I was very unsure about fixing the fence. Now that I get to keep the house I have a much greater incentive to protect my garden, and especially my fruit trees from the cute, rapacious deer. A new full fence cost too much; but, 16 feet of wire deer fencing, some metal posts, and some cast-off wood lattice replaces very stout and opaque with hopefully stout enough and obscured enough to discourage four legged marauders.

Fixing the fence kicked off more of a celebration than getting the documentation for the mortgage modification. The paperwork is more important, but the fence is tangible and hopefully means I’ll get more apples and figs (and maybe raspberries from an offered transplant). This year I managed to harvest two apples and six figs. The deer got a lot more than that. And I didn’t hear them say thank you. Since the fence is up I even find myself visiting it late at night to prove that the plants are safe, except from the birds, bunnies, slugs, and snails.

Our economic recovery seems to be messy, too.
Budgets are still based on ideologies instead of practicalities. The banks are still too big to fail. Long term sustainable energy and food production continue to battle with short term extraction and manipulation.
And.
Communities and local governments are ignoring archaic arguments and making necessary changes. People are borrowing from and lending to other people, rather than banks. Eating local is passing from fashion and fad into obvious and ubiquitous.

If we get a bit of good luck, we may find that we eventually evolve into the next phase past recovery, a sustainable future. It is the apocaloptimist in me. I suspect that, as we do, the things we celebrate will seem simple and secondary; yet, a long term sustainable recovery is built from such steps. Let’s celebrate those parts of the journey, rather than waiting for some phenomenal future event.

The plant I’d allowed to dry out, so it would be easier to move if I had to give up my house, responded with a few shoots as soon as I watered it. Now, a month and many waterings later, it grows towards the window in full growth regardless of the past, reaching for a future it is creating, fenced or not. 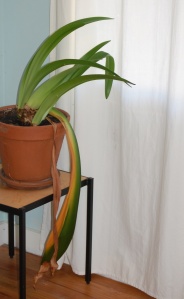